Okta released its eighth annual ‘Business at Work’ report today, looking at which apps and cloud services on the Okta identity platform were the most popular from November 1, 2020, to October 31, 2021. The report found that for the most part, Okta users tend to favor best-of-breed over the single-vendor approach of the past.

Microsoft Office 365 remains the most popular service, with AWS second and Google Workspace third, moving up fast with 38% year-over-year growth. In an interesting twist, though, showing a desire to avoid that single vendor lock-in, 38% of companies using Office 365 also used Google Workspace, while 45% also used Zoom and 33% also used Slack.

Considering that Microsoft has Teams, which also handles the video meeting functionality of Zoom and the internal communications capability of Slack, and Google Workspace competes directly with Office 365, it shows that even when Microsoft has similar tooling, companies will still go with a competing offering when it makes sense for them (at least Okta users will).

Still, the report reflects trends we have been hearing about in the market for some time, especially around multi-cloud usage and a move away from vendor hegemony.

That could explain why a number of the fastest-growing tools made their Business at Work report debut — Notion, TripActions, Postman, Keeper, Airtable, Fivetran and Gong. It’s worth noting that Airtable raised $735 million last December on an $11 billion valuation, Fivetran raised $565 million on a $5.6 billion valuation in September and Gong raised $250 million last June at a $7.5 billion valuation; showing that these companies are starting to go mainstream (at least in Okta’s world) at the same time their value is skyrocketing in the eyes of investors. Seems hard to imagine this is a coincidence. 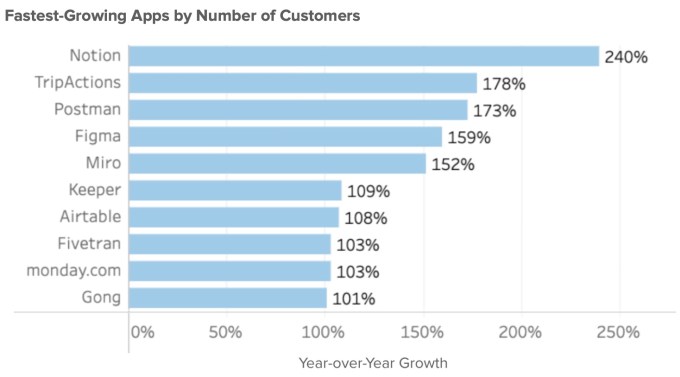 Just as we see AWS leading the way in the cloud infrastructure market, it’s the clear leader in Okta’s data as well. In fact, AWS usage at 32% pretty much matches its market share, which has held steady at around one-third over the last several years.

And as the cloud market shows a shift to multi-cloud usage, so does the Okta report, with 14% of users implementing a multi-cloud infrastructure vendor approach, a number that feels a bit low compared to the real world. That number is up from 8% in 2017. Surprisingly, the most popular infrastructure vendor pairing for Okta users is AWS and GCP, which is still pretty tiny at 2.6%. 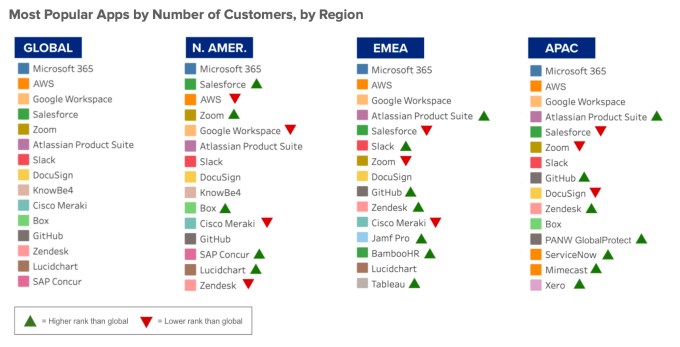 The report looks at data culled from Okta’s 14,000 customers and 7,000 cloud, mobile and web app integration for the period from November 1, 2020, to October 31, 2021. As the report itself points out, this data reflects the usage by Okta customers and may not be representative of cloud usage as a whole — only how Okta customers tend to use it. Regardless, it provides a useful set of data points for anyone looking at how companies use the cloud today.

Okta CEO Todd McKinnon explained that the company has a small team devoted to pulling this data into a coherent set of results in this report.

“There are probably like five or six people, including a couple of data warehouse folks doing the queries, a few analysts, some iteration with me and the content and PR team to figure out what is interesting. And then, of course, we talk to our partners because all these companies are partners of ours [and they are interested in hearing about the data, too],” McKinnon told me.