Supply chain issues continue to have a major impact on smartphone manufacturers per newly released figures from analyst firm Canalys — global shipments grew only 1% year over year in the final quarter of 2021. The numbers come on the tail of Q3 reports, which saw an overall drop of 6%, citing similar issues over component supply.

The firm also factors in a resurgence of COVID-19, courtesy of the omicron variant, which has sent a number of locals into shutdown reminiscent of the pandemic’s early days roughly two years ago. Canalys notes that this impact is greatest among the smaller manufacturers in the market, who have had the greatest issues finding new suppliers.

“Component manufacturers are eking out additional production, but it will take years for major foundries to significantly increase chip capacity,” the firm’s Mobility VP Nicole Peng said in a statement tied to the new figures. “Smartphone brands are already innovating to make the most of their circumstances, tweaking device specs in response to available materials, approaching emerging chipmakers to secure new sources for ICs, focusing product lines on the best-selling models and staggering new product releases.” 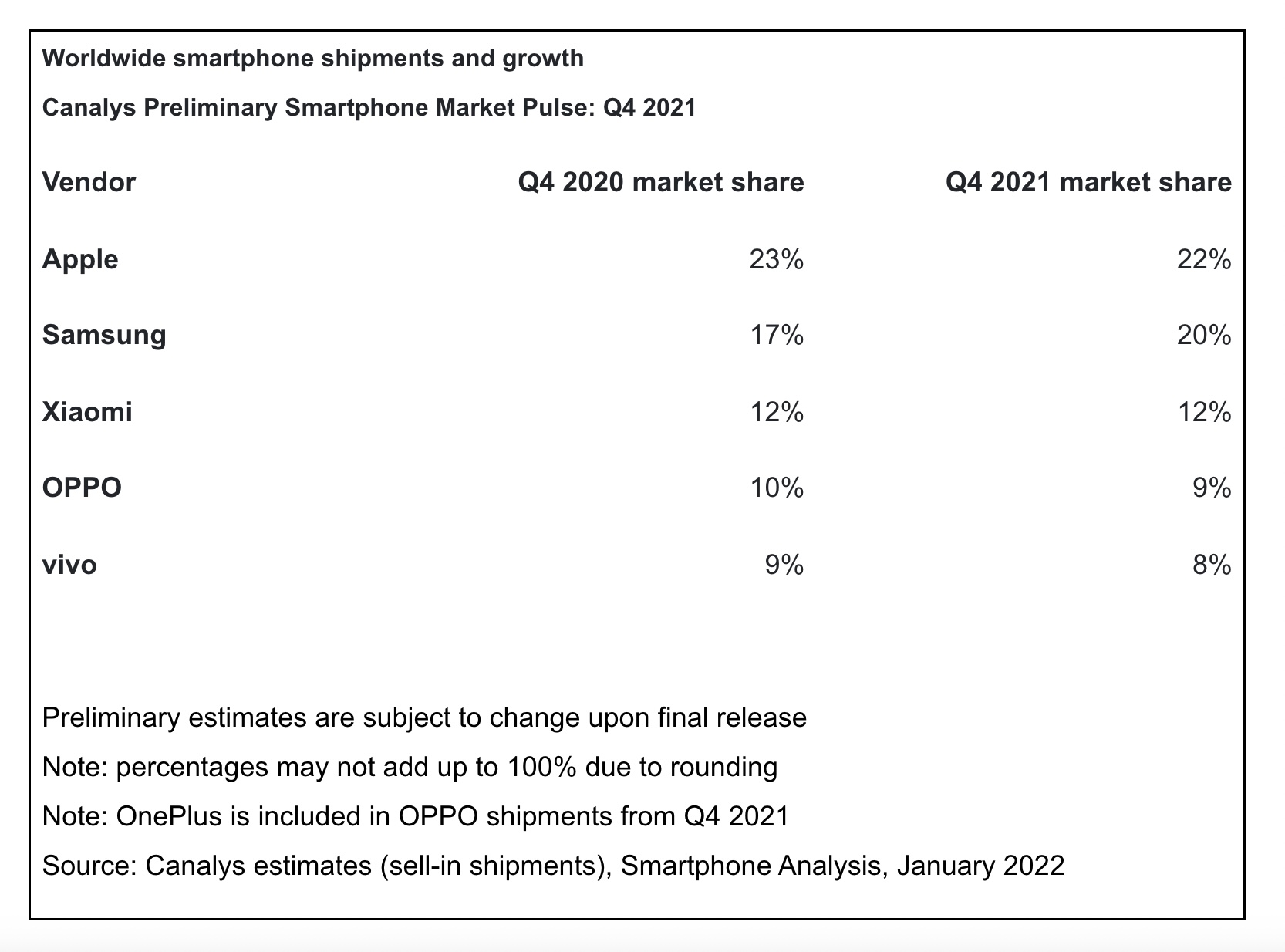 Larger companies remain less impacted overall by shortages and bottlenecks. The quarter also saw Apple return to the overall top spot in the global market, after three quarters away. The company’s rise is attributed to the success of the iPhone 13 and an extremely solid performance in Mainland China — the world’s largest smartphone market.

Apple’s overall marketshare ticked up from 12% to 23% of the market since last quarter. The previous drop owed in part, to the company’s trouble meeting demand in a number of regions in recent quarters.

“Apple’s supply chain is starting to recover, but it was still forced to cut production in Q4 amid shortages of key components and could not make enough iPhones to meet demand,” says analyst Sanyam Chaurasia. “In prioritized markets, it maintained adequate delivery times, but in some markets its customers had to wait to get their hands on the latest iPhones.”

Samsung, meanwhile, dropped to second, from 23% to 20% of the total market. Chinese manufacturers Xiaomi, Oppo and Vivo rounded out the top five for Q4.