Line is a regular staple at CES, showing off its high-end milled-aluminium docking stations. This year, the company is back in Las Vegas with an accessory aimed squarely at the gamers among us. Line Frzr is a thermoelectric active cooling device that pre-cools the air before it goes into your gaming laptop.

Traditional laptop cooling solutions might increase airflow into the laptop, but Line’s solution takes that strategy a couple of steps further. The Line Frzr cools the air from room temperature to mid-winter frost that a freezer would be proud of, -5°F (or -15°C), before injecting the freezing cold air into the laptop. The theory is that this keeps the computer’s CPU and GPU much cooler, enabling them to run cooler, and therefore at a higher clock speed with greater performance, for longer.

The cool-looking tech is using thermoelectric cooling, but instead of bonding the Peltier elements directly to the processors (which is a well-documented awful idea), Line’s team came up with a different approach — pre-cooling the air with a pair of little cooling towers, and blasting it into the laptop from there. The design relies on the most common design architecture for gaming laptops, the company tells me. The battery lives underneath the keyboard, and the laptop is lifted up on little feet for maximum air circulation, typically with two air-thirsty fans.

“Electronic components have recommended operating temperatures; the same goes for thermal paste on CPU/GPU, and most importantly the battery,” explains Nancy de Fays, co-founder at Line, explaining why blasting the laptop with sub-zero temperature air won’t harm it. “The Line Frzr does not freeze the entire laptop: it blasts sub-zero temperature air into the laptop air intake. Said air then flows into the fan and finally through the heatsink radiator; laptop fans are rated at subzero temperatures, and on top of that, the system is regulated by infrared sensors monitoring the laptop temperature. When the GPU/CPU drops below 50°C, the system stops cooling.” 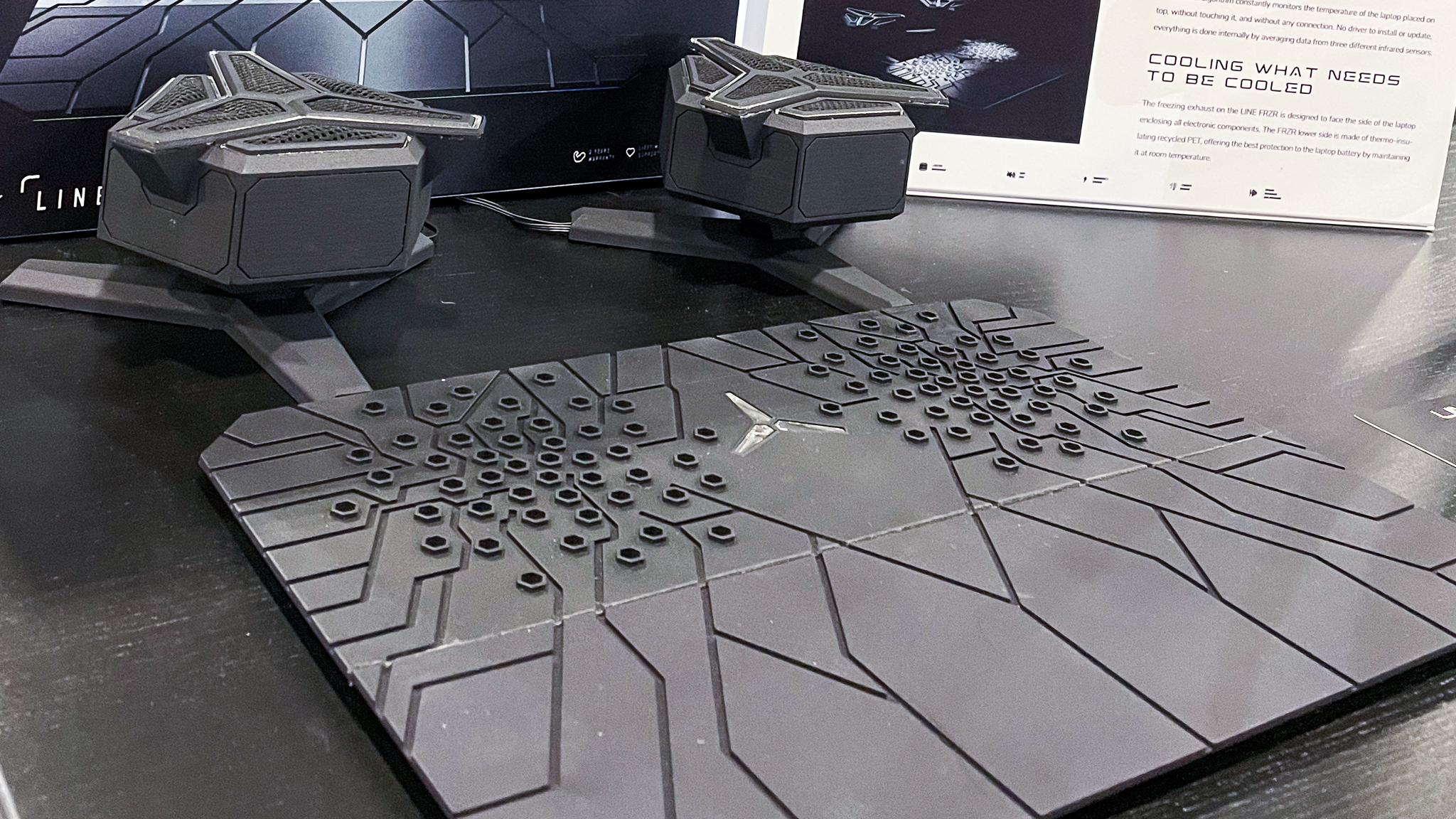 The Line Frzr prototype at CES. The holes are designed to align with the air intakes on a gaming laptop — and the little three-pointed star is the temperature sensor. Image: Line, Inc.

“We blow the air into the fans, not into the electronics of the laptop. The Frzr itself isn’t meant to be portable — it is meant to add a huge amount of extra cooling to your gaming laptop when you’re playing at home, and you can harness the power of a real desktop computer,” explains Quentin Malgaud, CEO and co-founder at Line, Inc. “We actually started working on this concept when we were working on the original Indiegogo campaign [in 2017], but we put it on the back burner because it wasn’t efficient enough to be battery powered. In our tests on this bad boy [Malgaud is gesturing at the technical prototype at the company’s CES booth], we saw an up to 25% CPU score improvement.”

“We wanted to create a gaming look, which is why our design has these little cooling towers,” de Fays explains.

I was mildly skeptical as to whether this product is a good idea in the first place. As a layperson, rapidly heating and cooling components that have different thermal properties could cause issues. The company assures me that my worries are unfounded, however, preventing any issues by using the infrared thermostat system that monitors the temperature of the laptop placed on top of Frzr. This automatically activates cooling if and when required, without the need to install drivers. The device takes care of the cooling independently by averaging data from the temperature sensors. 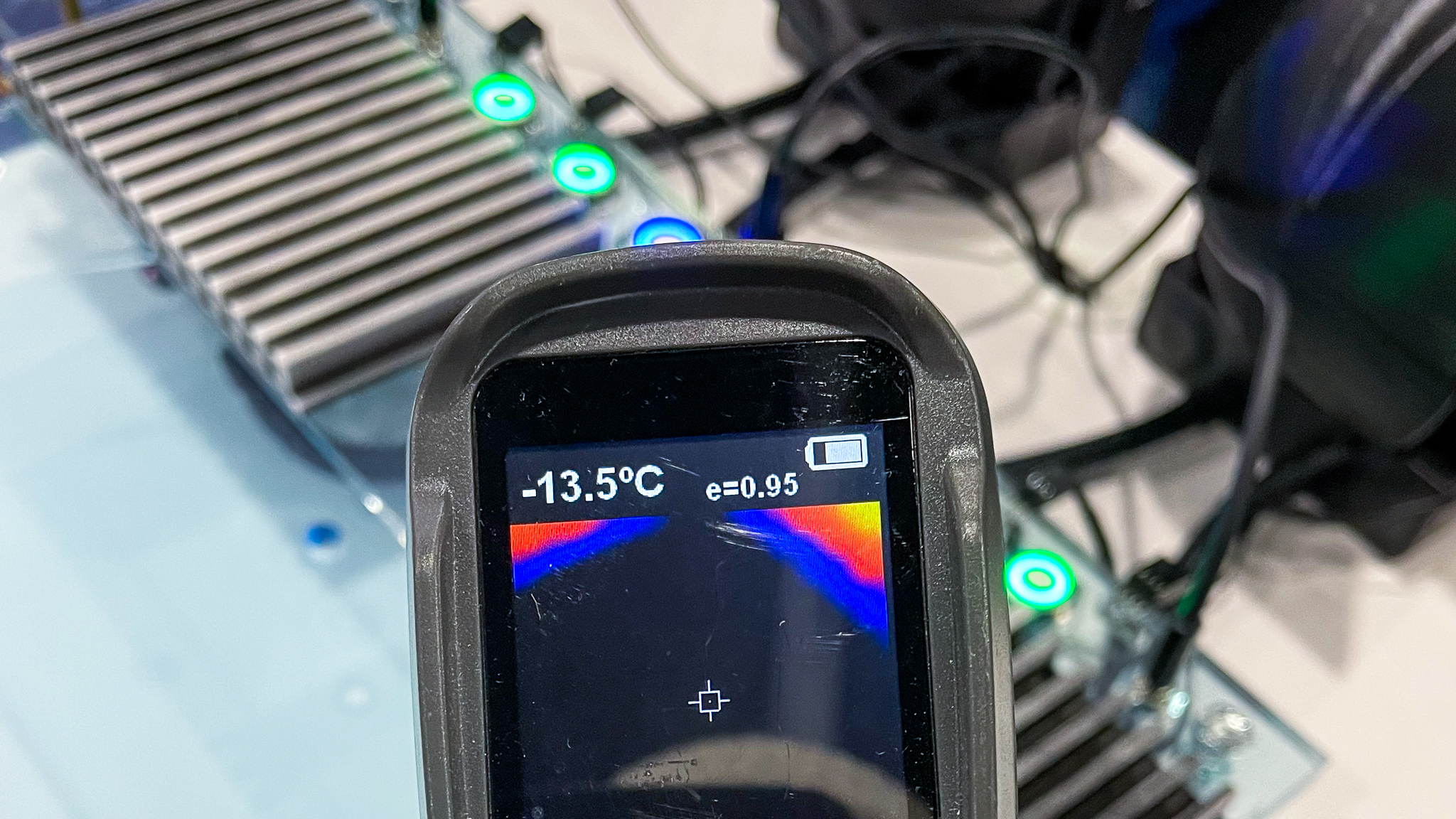 Line demonstrated how well its cooling system works on its functional prototype — in this case, cooling the air surfaces to -13.5°C (7.7°F). Image: Line, Inc.

The company has a patent on the IR sensors that observe the laptop’s temperature, and it has a slew of additional patents in the pipeline.

The product does not have an official price tag yet, but Malgaud suggests that end-users should expect a sub-$300 price tag, and that the company is hoping to get the price down to under $200 by the time the production version is finalized. The company is expecting to start shipping it to eager semi-mobile gamers in October this year.