Not in a oh-hell-I-cannot-sit-down kind of sore. More like, “OK!, I worked some-long-ignored-muscles sore.” And in year where I’m trying to extract myself out of the COVID-19 pandemic doldrums, this is a good thing.

The cause isn’t from cycling on a Peloton but another newer entrant to the connected home gym scene. It’s called FightCamp; and as the name implies, this home exercise system, which includes a punching bag and gloves with connected smart trackers, focuses on boxing and kickboxing.

After more than a month with FightCamp it’s safe to say (or write) that it provides a sweat-producing workout that if completed regularly will improve the user’s core, balance, speed and basic boxing know-how. It also provides a safe “non-judgy” path for those who have always wanted to try boxing, but were too intimidated to walk into a boxing gym or mixed martial arts center and let that rookie flag fly.

To understand what FightCamp is and does, it’s worth going back to the beginning. The company was founded in 2014 as Hykso, four years before the connect home workout system FightCamp was launched. During that four years, the company developed fitness trackers that were tested, further improved and used by Olympic boxing athletes. Several Olympic boxing teams including the United States, Canada and China used the trackers. Manny Pacquiao, considered one of the best boxers of all time, was an early user as well.

There was no content layer since these athletes already were competing at the highest level of the sport. It was just the trackers and loads of data.

But a curious thing happened. The boxing coaches started using them with their private clients, according to Khalil Zahar, founder and CEO.

“They were the bridge,” Zahar said referring to the coaches. From here the idea of FightCamp was borne. “We thought, let’s provide a way for people to not only use it in their workouts with coaches, but let’s teach them the art form of boxing and build a beginner-based program that they can follow from the home and learn techniques,” he said.

FightCamp offers three “hardware” packages: Connect for $439 ($399 during holidays), Personal for $1,219 (but on sale over the holidays at $999) and Tribe for $1,299. Users must also subscribe to the content for a monthly fee of $39, which gives access more than 1,000 classes, drills and other content in the iOS app and more recently, the Android app. And this is not just about throwing punches. There are workouts that include kickboxing and a little toggle on the app will ensure that every session ends with core work like situps and planks.

Connect comes without the bag, just the digital punch trackers and quick wraps and is designed for folks who already have their own punching bag. The Personal package, which is what I tested, includes the punch trackers, quick wraps, gloves, the free-standing bag and bag ring. Mine also came with a mat, but I’ve been told that is no longer included, which is too bad. 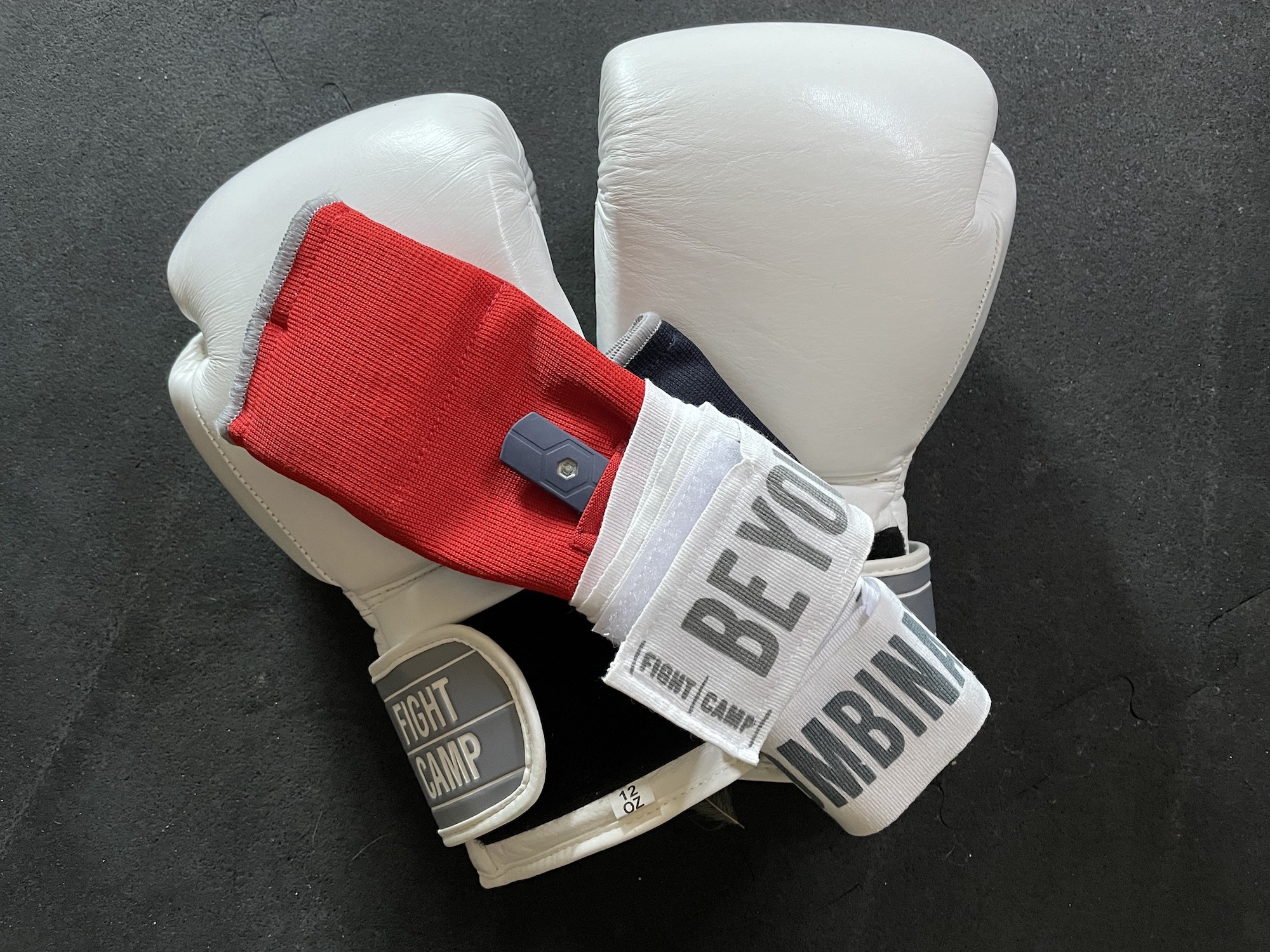 The FightCamp Personal package came in two boxes: a massive cardboard box carrying the bag and base and another box holding the punch trackers that track the user’s output and number of punches, quick wraps, a mat and pair of gloves. (The mat is no longer included in the Personal package.)

The instructions to set up the bag and ready the trackers are simple. However, it is a bulky, somewhat awkward endeavor depending on where the user decides to place the bag. I brought mine into our guest house, a spot out of the way of normal daily living, yet near a TV. (More on that later.)

After laying out the mat, users position the base that the bag will sit in. The base is then filled with water or sand. I opted to run a hose from outside into the guest house, which greatly reduced the setup time. Otherwise, you’ll be trekking back and forth with a pitcher of water or bucket of sand. If that sounds like a pain, well it is, although you do get exercise in the process.

The mistake I made, and one that I missed and later corrected, was to make sure to place the base EXACTLY where I wanted it. Once it is filled with water or sand or both (user’s choice) and the bag is placed on top, it is impossible to move without a dolly.

My mistake was placing the base and bag on the wrong end of the mat so that I would be facing away from the TV. Once I corrected the error, it made a dramatic difference in the quality of workouts.

What works and doesn’t 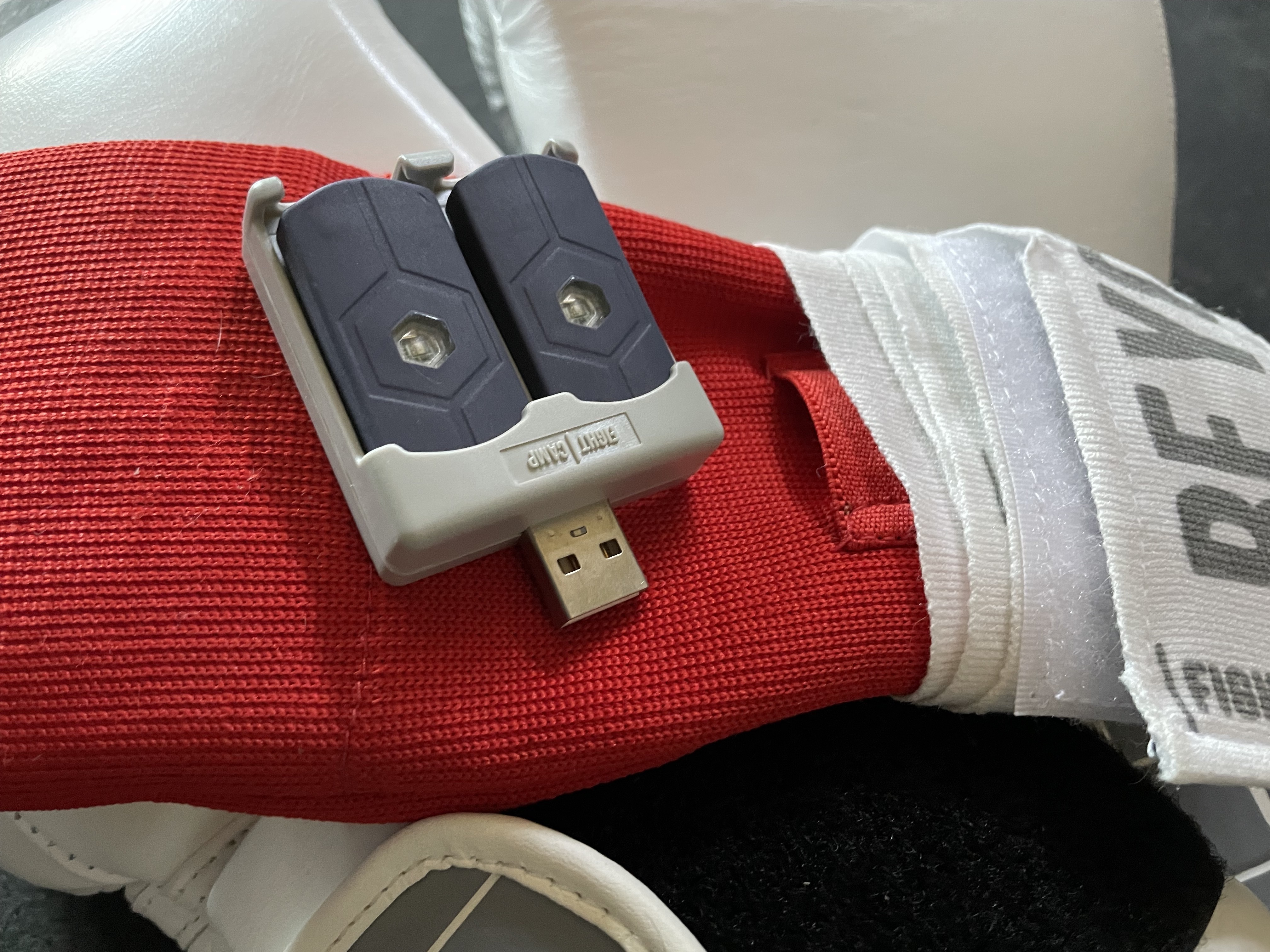 The good news is that the punch trackers, pictured above, work as advertised and truly track every punch. The app is also easy to use and there are loads of workouts, all of which are led by USA boxing certified coaches and NASM CPTs.

I particularly liked the setting that ensures core exercises follow the boxing or kickboxing instruction. The company even has some shadowboxing classes, which are meant for new customers to begin to learn the lingo and the basic punches and jabs before their bag, gloves, wraps and trackers arrive.

There are a few downsides to FightCamp that may or may not turn users off.

One is the sheer size of the system. In a small apartment, the bag will take up valuable real estate that some may welcome and others may find problematic. Folks with a larger home or garage might be more attracted to this system. I didn’t have this issue since I had the space.

To me, the main drawback of FightCamp is that without a TV nearby, it’s hard to properly follow the instructor until you’ve logged enough workouts that you can follow along without having to stare at the screen.

The actual content is clear and easy to understand. The coaches deliver the right combination of stoke and instruction to keep the user motivated and informed. I personally learned a lot.

However, there is a learning curve. In the beginning, and before I had hooked up the phone to my TV, I found myself repeatedly stopping the video to playback the previous movement. That created a staggered experience.

Once I had the TV hookup and was able to stream the workouts, I was able to more easily follow along. I did improve to the point where I no longer had to watch the exact movement to know what to do. Instead I was able to listen and know that 1-2-3 means jab, cross, lead hook.

Finally, I still don’t know if I have good form since there is no way for the trackers or the app to provide that kind of feedback. That probably doesn’t matter for people like myself who just want a sweat-producing workout.

Where is this all going?

Zahar and the company have plans to expand, not just in content, but trackers that can help provide better feedback on form as well as further gamify the workout.

Today, people can use data captured from the punch trackers on their wrists to compete against each other and monitor their progress. Zahar wants to add trackers to the feet.

“And then we want to expand to everything that a fighter touches and make it into a connected fitness accessory,” he said. “So think anything from jump rope, to battle ropes to kettlebells to plyo boxes, and basically reward you for every movement you’re doing during the workout.”

Zahar doesn’t want FightCamp to be an equipment-only workout system either. The additional trackers and additional content that doesn’t require a punching bag will help the company meet that goal, he said.

FightCamp is already beefing up its free content. The company recently announced it will offer more than 100 free workout every week. These workouts are listed as “tracker optional,” which means they’re free and don’t require the punch trackers. These workouts will focus on shadowboxing, recovery, stretching, kickboxing and body weight exercises. For now, these free workouts will only be available on the iOS app since the recently added Android app is still in beta.