A new report from early-stage venture capital firm Work-Bench confirmed what you probably already know: Startups with women founders are getting a mere sliver of the overall funding pie. What’s more, the percentages are far worse in the enterprise, where Work-Bench tends to invest.

The numbers, which were based on Work-Bench research along with data from PitchBook and Crunchbase, showed over 25% of startups receiving funding included at least one female founder, but when you looked at just enterprise software companies, the number plunged to a dismal 1.9%.

The fact is that research has proven these numbers make little sense. As the report authors wrote, “research has shown that female-led teams generate 35% higher return on investment than all-male-led teams.”

Yet the gap persists.

Jessica Lin, co-founder and general partner at Work-Bench, said that one of the motivations for starting her firm was the persistent lack of female representation at the corporate level, among startup founders and particularly at VC firms that control the purse strings.

The first step was to build a database of female founders, which she said the firm has been working on for the past four years and updates on a regular basis. They made this database publicly available. “I’ve always said behavior change also requires data,” Lin told me.

The impetus behind the report was to put that data to work, showing investors just how pronounced the problem is and tracking progress (or lack thereof) over time. And she especially wanted to focus on the enterprise, where her firm operates, because she said there was a distinct lack of data in that area.

“So this is the first time we’ve said, ‘Hey, why don’t we actually put it together [into a report]?’ So I would love to tell you that maybe in a year from now we can see that sub-2% number has gotten to 3%. But we just had to have a baseline somewhere,” she said.

While the number is small, there are some areas where women are more likely to be involved in funded startups. The biggest area by far was HR/future of work with 35.1%, followed by data/AI/machine learning with 19.8%, and sales and marketing with 12.2%. 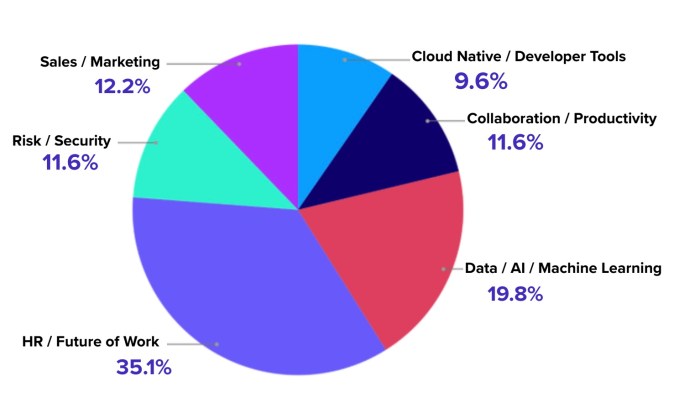 Women face a number of challenges. For starters, there is still a lack of women in leadership roles at major tech companies. If more women held jobs with higher salaries, they could not only act as mentors, but participate in angel rounds that could help drive more women-led startups.

Idit Levine runs the startup Solo.io, a cloud-native software company that recently landed a $135 million Series C investment on a $1 billion valuation. As Levine told me at the time of her funding, she’s frustrated by tokenism in the tech industry:

“I never asked for anybody to give me this discount because I’m a woman. Actually, sometimes it has been irritating. Oh, we want to give you a talk because you’re a woman. It pissed me off. You need me to give a talk because I am damn good.”

Yet many women lack her confidence. The New Stack reported on a recent panel at KubeCon, where a group of women talked about the obstacles they face as an underrepresented group in cloud-native technologies. Many of the panelists expressed a common feeling among underrepresented groups of imposter syndrome — feeling like they don’t belong even though they clearly have the skills and abilities.

In a June TechCrunch article on the experience of four women engineers in tech, Yury Roa, SRE technical program manager at ADL Digital Labs in Bogota, Colombia, told me that imposter syndrome can be a real impediment for women in tech:

“One barrier for us related to being the only woman in the room is that [it can lead to] impostor syndrome because it is common when you are the only woman or one of few, it can be really challenging for us. So we need to gain confidence, and in these cases, it is very important to have role models and leadership that includes women,” Roa said.

Work-Bench is a small firm trying to make a big impact by providing data to illustrate inequities in the system. As Lin noted, data can drive change, but it’s going to take a full-blown systemic shift to move these numbers. That’s going to require more women being promoted as executives and investing as angels and venture capitalists.

Only then can we truly move the needle. Because 1.9% is not good enough. Not by a long shot.