As the world quickly transitions into a global village thanks to the rapid penetration of internet networks, it is easy for some people to be left behind owing to the remoteness of their locations. In most parts of Zanzibar, an autonomous island in East Africa, for example, services by terrestrial cable and satellite networks are deficient, leaving a big percentage of the population uncovered. But, if plans by the World Mobile Group — a global telecommunications operator — materialize, many Zanzibaris will be connecting to the internet for the first time in the next few months.

World Mobile is building infrastructure for last-mile connectivity using spectrums like free-space optical communication and other radio transmitters, which do not require licensing, translating to less expensive internet access.

“There’s a lot of fiber optics that have been laid throughout the continent, and we pick up on the last mile of fiber and use alternative spectrums like free-space optics, or other radio spectrums that do not require licensing,” World Mobile group CEO and founder Micky Watkins told TechCrunch.

Watkins said that because they do not require licenses for these alternative spectrums they get a massive tax saving, which translates to cheaper internet for users.

“We use these alternative spectrums to build the backhaul (connection between an access node and the core network) and then create a device (node) that people can use to pick up from that backhaul,” said Watkins.

For sustainability, the air nodes will be owned by private entities, through a one-off fee of about $7,000 that they will recoup over time by earning income or rewards in the form of World Mobile Token (WMT), the operator’s cryptocurrency, as people connect to the internet through their access points. The network operator is working with micro-lenders in financing entrepreneurs to buy the nodes.

Each air node provides reliable Wi-Fi internet to 500 to 700 people, and other ancillary utilities like public lighting through integrated solar-powered floodlights.

“And now the residents have a choice; do I own livestock or is it better for me to own part of a telecom infrastructure and run a telecommunications platform? This option was never there before; so, just like Uber or Airbnb, we are operating under the sharing economy model.”

World Mobile is currently serving about 3,000 customers on the five pilot sites, but has plans to expand to 30 sites by January — as it moves to fast-track the connectivity efforts.

Watkins said that current users spend about $4 a month on internet usage. The operator has a network of vendors where users onboard their fiat cash or buy WMT, the company’s digital currency, to connect to the internet.

World Mobile has a more ambitious plan of covering Zanzibar in five years, making internet available to the entire population of 1.5 million people, stepping up competition for traditional network companies like Zanlink and satellite internet companies like GlobalTT teleport and operator.

“We have a few deals that are coming through the pipeline that will allow us to have connectivity throughout the whole of Zanzibar, including the whole shoreline and in between mainland (Tanzania) and the borders of Zanzibar, allowing us to implement IoT, as well as connectivity for the people,” said Watkins.

The company is set to roll out the network in Kenya and Tanzania, where they already have operations, over the coming months.

“This is a movement, and this can be the biggest mobile network in the world that is run by the people. No one has ever done that before. So that’s what we’re actually going for,” said Watkins. 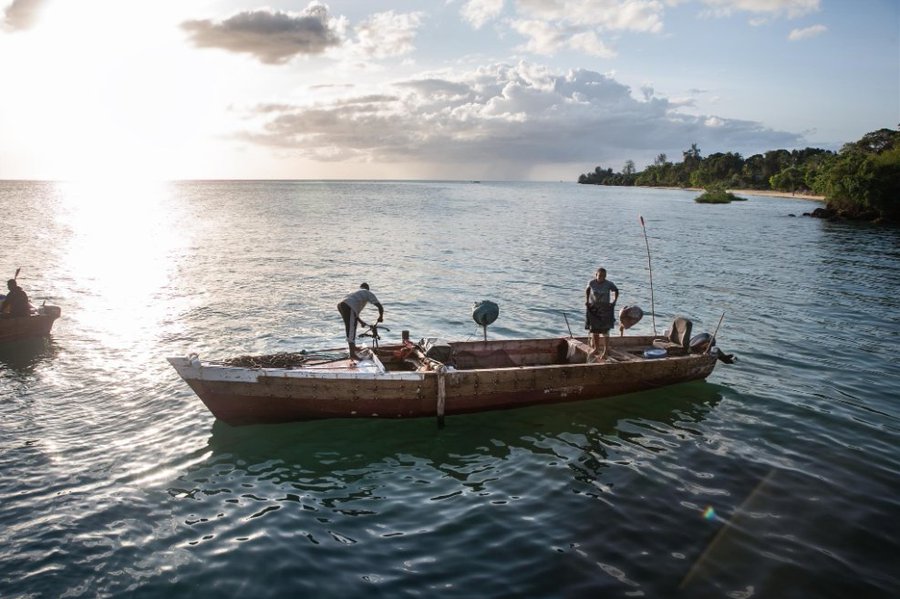 How Zanzibar is tapping connectivity to build a digital economy

As more citizens get connected, the Zanzibar government has started implementing its digital economy framework, a plan it had shelved for over a decade.

Among the many ideas it had laid out and is now on course for includes tapping connectivity to grow its blue economy and to develop solutions that protect Zanzibar’s blue economy from illegal fishing trawlers.

Zanzibar’s ocean-based activities provide employment to 33% of its labor force and contribute more than 29% of the island’s GDP, but could realize more from its ocean-based wealth with better technologies.

It will also help in building infrastructure that will help it automate all its administrative tasks and processes. This means building an e-government system that would allow the interaction of government with its citizens, businesses, employees and between its agencies. The investment will make the government more accessible to its citizens, who no longer need to physically visit offices for services or information.

“The new administration is really focusing on digital transformation. We need to get there. But first we’re going to ensure that everybody can access the internet at an affordable rate,” said Said Seif Said, director general of the E-Government Agency of Zanzibar (eGaz).

The agency was established to promote policies, standards and other practices to improve ICT uptake across the public institutions.

“We might have a different solution like an integrated blue economy management system — which means we’re including satellite automatic identification systems, vessel management systems and drones. So, all this is to solve the problem of illegal unreported and unregistered fishing. And all these technologies need the connectivity to be in place.”

The urgency to digitize has partly been fueled by the COVID-19 pandemic, which has accelerated Zanzibar’s plan for a digital government and economy. Zanzibar is now compensating for the time lost by quickening its pace toward that transition.

“The COVID pandemic has really changed how we do everything and we need to enable our citizens to do what they need to do from their homes. We have to ensure the sheer accessibility of government services countrywide in an affordable, effective and efficient manner through the appropriate use of ICT, and that’s where this collaboration with the World Mobile Group and Input Output Global (IOG) comes in,” he said.

In the partnership, IOG, a blockchain and digital identity firm behind Cardano blockchain, will automate Zanzibar’s systems by implementing blockchain technology in registry systems to provide “digital identifications with traceability”. It will also integrate back-end government systems to enable business-process automation and facilitate the flow of communication within government institutions.

Meanwhile, Zanzibar is launching a blockchain academy that will, beginning early next year, hold conferences as the tourist destination positions itself as a blockchain center of the future.