Tidal and many independent music distributors teamed up recently to introduce a direct artist payments system. These partnerships foreshadow a larger pivot from Tidal toward experimenting with streaming payout models that are thought to distribute funds more equitably to musicians who don’t get millions of streams on any given day (AKA, people who aren’t Taylor Swift or Lil Nas X). To start, the company struck deals with independent distributors like CD Baby, Equity Distribution, Stem, Symphonic, Tunecore and Vydia. Starting on January 1, 2022, this model will apply more broadly on Tidal, including artists signed to labels, not just indie distributors.

If you’re subscribed to Tidal’s HiFi Plus plan — which costs $19.99 per month — up to 10% (or about $2) of your monthly subscription fee will be distributed to your most-listened-to artist. That percentage shrinks if you’re paying for your subscription through Apple’s App Store, though not Google’s App Store, a TIDAL representative told TechCrunch.

This model is an example of a user-centric payment system (UCPS), which is generally favored by artists. As described by Deezer, a streaming service that has expressed interest in UCPS, this system helps individual fans more directly and transparently support their favorite artists, since their subscription fee is distributed to the artists they listen to. So, let’s say you listen to a 10-track record one time on a platform that pays about one cent per stream, like Apple Music. Then, that artist will earn 10 cents (and that’s before distributors and publishers take their cut). But, on a UCPS platform like Deezer or SoundCloud, if you listen to 10 albums from 10 different artists in a month, then a portion of your monthly subscription fee is divided among those 10 artists, which means they’re probably getting more than 10 cents each. It’s similar to buying a CD — it’s not how often you listen to that CD, but rather, the fact that you bought it in the first place.

Tidal told TechCrunch that beyond its deals with independent distributors, a kind of UCPS will come to its HiFi Plus tier starting in January 2022. The platform says it teamed up with more than 100 labels — both major labels and independents — to develop what it calls its fan-centered royalties program. 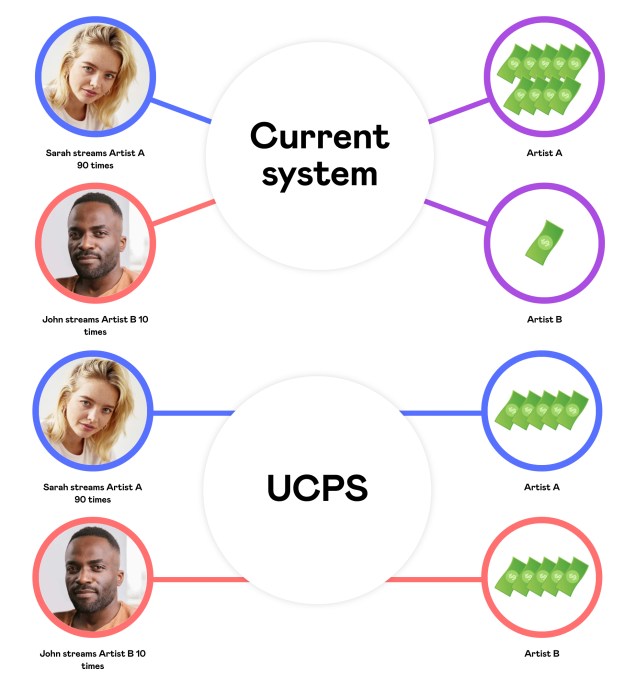 Currently, major streaming platforms like Apple Music and Spotify pay pro rata, which divides a pool of money based on total streams. But the growth of music streaming services — an attempted answer to the crisis of music piracy — has been, on the whole, not great for musicians. Musicians’ primary source of revenue is now touring, so when the pandemic hit and canceled a slew of concerts, the inequity of streaming payouts became even clearer.

Last year, the Union of Musicians and Allied Workers (UMAW) launched a campaign called Justice at Spotify, which demands the streaming giant to adopt UCPS, increase transparency about payouts and pay at least $0.01 per stream. As it stands, the platform is estimated to pay an average of $0.0038 per stream, according to the UMAW, but Spotify itself doesn’t disclose this value, saying that pay per stream is not a meaningful value to analyze.

“We applaud Tidal’s move toward a more user-centric payment system, a shift we’ve been demanding since we launched our Justice at Spotify campaign in 2020, and one already adopted by Deezer and SoundCloud,” said Joey DeFrancesco in a statement to TechCrunch on behalf of UMAW. “User-centric is no silver bullet, and we still desperately need more fundamental changes in streaming royalties, but it is a step in the right direction.”

Comparatively, Apple Music pays $0.01 per stream on average, per an internal memo leaked earlier this year. Tidal is thought to pay about the same, though the company itself hasn’t confirmed these numbers. But Spotify, which has the most subscribers out of the three streaming leaders, pays the least.

Spotify points out that it appears to pay less per stream than competitors because, according to the company, Spotify users stream more music than users on competitor platforms. Also, unlike Apple Music or Tidal, Spotify offers a free tier, subsidized through ads, which the platform says might skew its pay-per-stream metrics.

Streaming payouts don’t directly reach the artist — first, payouts are divided among an artist’s record labels and publishers. The amount that an individual artist will get per stream depends on their contracts in the industry. But for now, according to the UMAW, an independent artist would need to amass 283,684 Spotify streams per month to pay a monthly rent of $1,078, the U.S. national median.

Spotify took a minority stake in DistroKid in 2018, but just weeks ago, Spotify’s quarterly SEC filing revealed that it sold two-thirds of its equity interest in the independent distributor for €144, or about $163 million. It’s interesting timing for DistroKid to immediately strike a deal with Tidal, a more musician-friendly service, to enact a version of the policies that the UMAW are demanding from Spotify.

But Spotify doubts how much user-centric payments would actually benefit artists. A study from the National Music Center in France found that yearly payouts would fluctuate by “at most a few euros” for artists outside the top 10,000 acts.

“We are willing to make the switch to a user-centric model if that’s what artists, songwriters and rights holders want to do. However, Spotify cannot make this decision on its own — it requires broad industry alignment to implement this change,” says the platform’s website.

So, perhaps the model of Tidal’s deals with independent distributors — a variation of UCPS — could be more beneficial for artists. A $2 per month bonus per user for being their most-streamed artist could add up. But, industry-wide changes like these may require trial and error to determine how streaming platforms can run their businesses while also paying musicians fairly for access to their music.

“It’s a step in the right direction for streaming subscription money to directly support artists actually being streamed — and as a Tidal subscriber myself, I’m happy to learn about this step. That said, a $2 a month bonus — only to one artist per user, and only to artists signed up via [independent distributors] — is not going to add up for too many musicians and feels gestural,” Sadie Dupuis, a UMAW member, told TechCrunch. Dupius fronts bands like Speedy Ortiz and Sad13. “I’d be curious to know how many self-distributed artists are the #1 most streamed artist for any subscriber per month in general. It also excludes artists with label distribution, who also need fair streaming royalties, especially when they’re splitting 50% or more of those royalties with a label. It would be great to see more of this subscription fee proportionally divvied up to more music workers, regardless of how their songs are distributed.”
Update, 1/20/21 with clarification from Tidal.