Hyundai announced Wednesday at the 2021 Los Angeles Auto Show a new all-electric SUV concept vehicle that features everything from lounge seating to what Hyundai calls a “hygienic” interior, an appropriate feature as we enter the third year of the COVID-19 pandemic.

Concept vehicles are exactly what they sound like — exercises in creativity and technology that can point to some possible future vehicle. Just because a vehicle shows up as a concept at an auto show does not mean that it will ever show up at your local dealer, however. In this case, Hyundai has created a full-size SUV concept, on a real, you-can-buy-it-at-the-dealer platform.

While plenty of other automakers have shown off concepts with similar lounge-like interiors and seats that swivel 360 degrees for the days when fully autonomous driving becomes an actual reality for the masses, the unique feature of the SEVEN concept is its hygienic interior features.

First, a “Hygiene Air Flow” system can isolate the airflow between front and rear passengers. Air comes in through intakes in the roof rails and exits the vehicle via the wheel vents in what Hyundai terms “vertical mode.” In horizontal mode, or what we normally just consider to be typical vehicle ventilation, air moves from front to back. Hyundai says that the system will work whether the vehicle is moving or parked and that it was inspired by the more advanced systems used on airplanes. 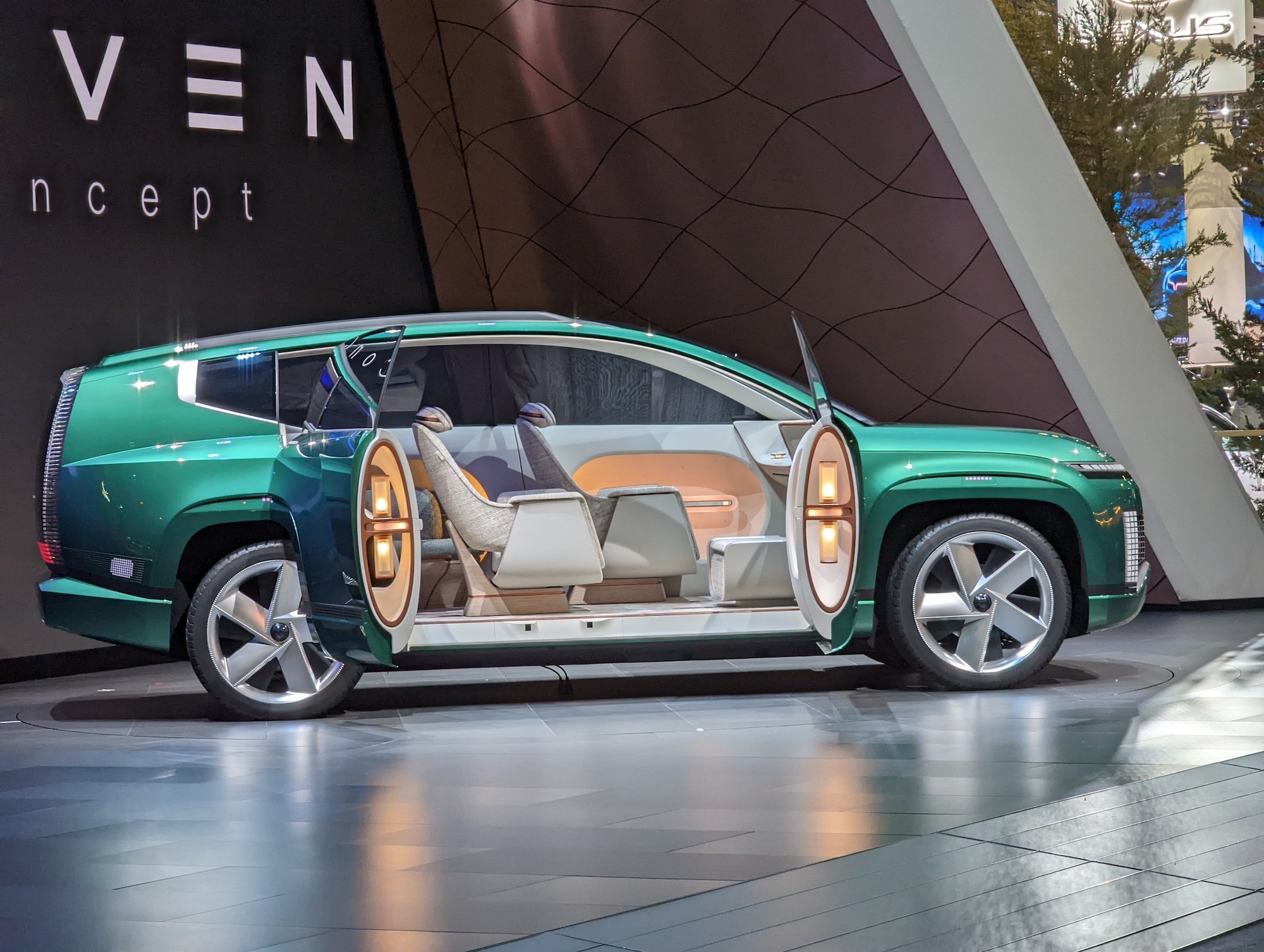 In addition to a tailored airflow, Hyundai also showed off its concept for keeping the interior clean between passengers and trips — since we’ll all be sharing autonomous vehicles in the future. In the pandemic era, this kind of concern is very real since the COVID-19 virus is transmitted through respiratory droplets and aerosols that can survive for many hours on all kinds of surfaces, including fabric.

The SEVEN concept has a UVC sterilization cycle that runs after passengers exit the vehicle. UVC, or Ultraviolet-C, light is a disinfectant for air, water and non-porous surfaces, and the FDA has reported that it does kill the SARS-CoV-2 virus which is the virus that causes COVID. UVC light can burn eyes and skin, which is why all the passengers need to be out of the vehicle before the program runs.

In addition to custom airflow and UVC sterilization, Hyundai has also included interesting touches like copper, which has antimicrobial features, and hygienically treated fabric to further prevent the spread of future viruses. Hyundai has even included a “shoe refreshing appliance” that would clean and deodorize your shoes.

The Hyundai SEVEN Concept will sit on Hyundai’s Electric Global Modular Platform, or E-GMP. That platform already underpins other vehicles in the Hyundai-Kia group, like the new all-electric crossover Ioniq 5, the first production Hyundai vehicle built on the platform. It’s the same platform that the Kia EV6 is built on and will be the foundation for future electric vehicles coming from the Hyundai-Kia-owned luxury brand, Genesis.

The platform allows EVs to charge at 400-volt and 800-volt speeds, in the case of real vehicles like the Ioniq 5, allowing it to charge from 10% to 80% in less than 20 minutes on a 350 kW DC Fast charger. Hyundai says that it can get upwards of 300 miles of range from the larger 77.4 kWh battery pack they offer.

While concept vehicles are often mostly vaporware, the Hyundai SEVEN concept offers an interesting blend of imagined and real that gives the world a glimpse of what the company thinks the future may hold for transportation.