Facebook announced today that it’s rolling out new shopping features: Shops in Groups, product recommendations and a test of Live Shopping for Creators.

Shops in Groups enables admins of Facebook groups to set up an online store on their associated Facebook Page. It’s up to the admins where this money goes — in the case of OctoNation, a page that tested the feature, the profits went to OctoNation’s nonprofit that educates people about octopuses (octopi?). This could get hairy in groups that don’t have a clear philanthropic aim, but it’s not as though Facebook groups have never been sites for drama before. Still, Yulie Kwon Kim, Meta’s vice president of Product Management, pointed out that many group admins are volunteers, and these shops could offer them a revenue stream for their work.

“The money goes to the group admin, and they can decide how they want to use it,” she told TechCrunch. “This is a great way for people to sustain and keep the group going.”

Facebook had previously announced its plans for group monetization features — including shops, fundraisers and subscriptions — at its Facebook Communities Summit hosted earlier this month.

Facebook has had Live Shopping for years, but as partnerships between brands and creators become more common, the app has begun testing a feature that would make these collaborations appear more seamless. Now, instead of an influencer directing fans to another page to watch them sell a product or vice versa, creators and brands can cross-stream on both of their pages. 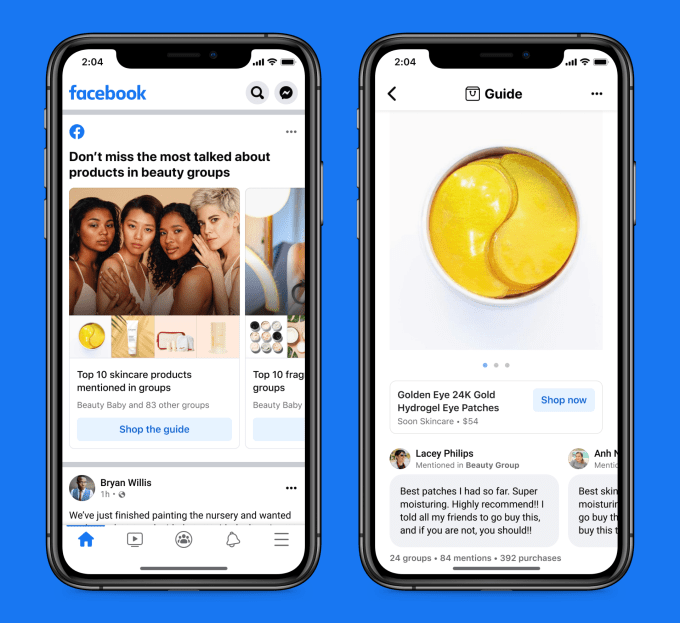 This year, Facebook — now under the company name Meta — has consistently worked on building out shopping tools for businesses and creators. So it only makes sense that as the holiday season draws nearer, the company is launching more ways to spend money on the Facebook app. These features will be available starting today on the web and on the Facebook mobile apps for iOS and Android.

Right now, Meta’s primary revenue stream comes from advertising, but the company’s investment in shopping could offer another source of income. Founder and CEO Mark Zuckerberg announced this summer that as Meta rolls out more creator and commerce tools, it’s committed to not taking a cut from the earnings of businesses and creators until 2023. He added that when the company does introduce a revenue share, it will be less than Apple’s 30% cut. But by building a robust infrastructure for e-commerce now, the company is positioning itself for future profit.