When Las Vegas Convention and Visitors Authority CEO Steve Hill unveiled The Boring Company’s plan for a subterranean shuttle that would whisk visitors to different parts of the city’s vast Convention Center campus, he predicted it would take just under two minutes to travel between its farthest stations.

“If the system doesn’t work, we will get all of our money back,” Hill said, in June 2019, according to the Las Vegas Review Journal.

That two-minute promise was repeated to the media as recently as April, according to an email between a Boring Company (TBC) representative and the LVCVA. That email was part of a 5,051-page drop of documents obtained by Plainsite under public records legislation.

So far, it seems the two-minute target is still out of reach.

Detailed trip reports from the same records request show that in its first six weeks of operation, the LVCC Loop’s Tesla taxis took an average of nearly four minutes to span the system.

The data, which cover over 30,000 free rides and 75,000 passengers, reveals that there was no day on which the trips took an average of less than three minutes, and one day they needed an average of five. (TechCrunch excluded days on which the system transported fewer than a thousand people in total.) Videos of rides taken during a large auto conference last week (which was too recent to be included in this batch of public documents) show similar trip times.

A few minutes’ delay won’t make a big difference to the average convention attendee, of course, but could add up to big financial penalties if TBC misses ridership targets during giant shows like CES. The disparity also calls into question TBC’s promises for a much larger public Loop network in Las Vegas that recently got the go-ahead. Ultimately, the LVCC Loop’s performance could signal whether Musk’s subterranean taxis can be a viable form of urban transportation, or more of a Tesla-boosting amusement ride. 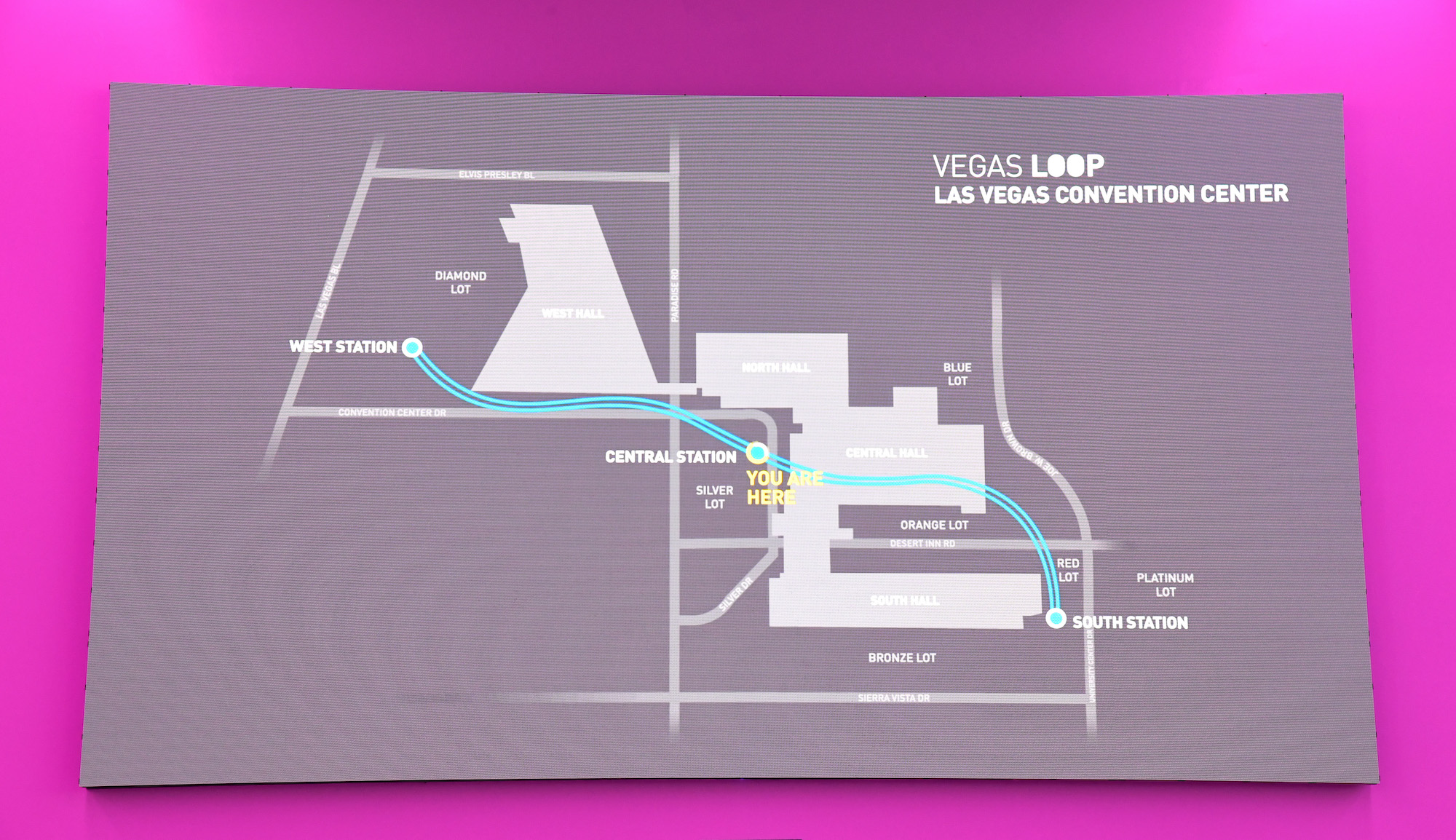 A digital map is shown in the Central Station during a media preview of the Las Vegas Convention Center Loop on April 9, 2021 in Las Vegas, Nevada. Image Credits: Getty Images / Ethan Miller

The larger Vegas Loop system is planned to comprise 51 stations and around 29 miles of tunnels, linking many of the city’s tourist sites. On its project page for the Vegas Loop, TBC suggests a trip from the city’s NFL stadium to the Convention Center would also take four minutes, despite the distance being more than four times longer than the LVCC Loop today.

The real-world travel data also raises doubts as to whether the LVCC Loop as it stands can meet its capacity goal of transporting 4,400 conference attendees per hour.

TBC achieved that number during a demonstration event in May, by squeezing three riders (without luggage) into each of the 62 Tesla Model 3, X and Y vehicles in the system. In reality, however, an average of just two passengers rode in each Loop vehicle between its opening to conventioneers in early June and mid-July.

A contract signed by TBC in 2019 specifies a $300,000 penalty for each large convention where TBC cannot move around 4,000 people per hour. A penalty that large could impact the viability of the Loop, which earned just $230,500 for transportation services during its first month of operation in June. (TBC also gets a monthly management fee of $167,000, regardless of how many cars it operates.)

The highest number of passengers per hour the LVCC had transported by mid July was 1,355. A big reason for this is that the LVCC does not generally have its largest conferences in the heat of a Nevada summer, and there were simply not that many passengers requiring transportation. During a beauty convention in June, for example, a Loop operations engineer wrote to the LVCVA: “I trimmed back the [number of] cars now because we are seeing a super low volume of passengers.” Some evenings, Loop management closed the system early after no passengers had entered the system for 15 minutes.

The Loop has three levels of service. Level 2, offering just five cars and no station attendants, is when there are no active conventions on the LVCC campus. Level 3, with 23 vehicles, can handle up to 20,000 visitors. Level 4, with from 30 to 62 Teslas, is for the largest events.

The acid test for the system will likely be the CES convention in January, which can attract 185,000 attendees. Last week, the Loop got permission to operate with 70 vehicles, as TechCrunch predicted in August. Even so, it will need to either cut trip times or persuade at least three passengers into each vehicle to avoid the capacity penalty. It will also have to cut down on “ghost cars” driving without passengers on board — which actually accounted for a majority of trips during the Loop’s opening event in early June.

The current tunnels seem unlikely to accommodate many more vehicles. During the 70-vehicle test last week, a city inspector noted: “There were some occasions where vehicles entered and exited the tunnels within stations within 1 to 2 seconds apart.” The Loop’s safety analysis is based on maintaining six seconds of headway between cars.

The good news is that riders seem to like the Loop. “Customers really love the system and it is clearly their preferred method of travel around the campus. Wait times are manageable to about two minutes max during the largest of surges,” wrote Seth Hooper, director of Loop Operations, at the end of June. Multi-colored “rainbow road” tunnel lights that were originally turned on for just two minutes every quarter hour are now an almost permanent fixture, due to rider demand.

In fact, one of the system’s biggest problems continues to be unauthorized visitors. As well as the intruder vehicle that TechCrunch revealed in October, the Loop has had multiple incursions by convention center employees apparently keen to have a peek. “The biggest culprits of unauthorized vehicles are LVCVA carts,” wrote Hooper.

Even animals got in on the action. In late July, two TBC employees tried to rescue a kitten that had fallen into a storm sewer near the system’s South station.

TBC and the LVCVA did not immediately respond to questions about the cat’s ultimate fate, nor to other detailed queries about the trip data. However, TBC is cataloguing the safety and security incidents that any transportation system faces. On at least three occasions, Loop drivers have struck fences or bollards when misjudging turns, causing minor damage. The only injury to a passenger (by the end of June) was a Loop passenger sustaining a small laceration and contusion to her finger when another passenger closed a vehicle door on her hand.

All of this data will be invaluable to TBC as it plans to scale up the technology to serve an entire city. It is not yet known whether the Vegas Loop, unlike the LVCC system, will accommodate children and pets, nor exactly how much tickets for the paid system will cost.