Calixa, the early-stage startup that is building a tool specifically tuned for product-led sales cycles, announced a $12 million Series A today led by Kleiner Perkins with participation from new investors Salesforce Ventures and Twilio.

Product-led companies typically offer a free or open source version of the product as a way to whet the appetite of potential users, but Thomas Schiavone, CEO at Calixa, a company he co-founded with CTO Fred Sadaghiani, says that the previous generation of tools wasn’t really designed to help sales teams turn those free users into sales.

Schiavone says that many companies understand a top-down sales motion, but when they layer on a product-led strategy, they need new tools to work alongside their current sales and marketing tools to help turn those free users into pay ones. When we last spoke to Schiavone, in March, the company was announcing a $4.25 million seed round. He said at the time they were just developing the product, but over the ensuing months, it has begun to come into clearer focus.

Today, Calixa has developed into what he describes as “a workflow for high-velocity sales” by directing sales to the best customers to engage with. “So it’s about prioritizing your product-qualified leads, knowing what to talk to them about and then actually engaging with them.” That comes in the form of a list of these customers with more targeting messaging.

“Traditionally, you’d get those marketing drip emails that are not very well targeted…Now with Calixa, you can arm reps with very tailored messaging because they can actually see what people are doing and message the customers at the right time when they’re starting to adopt [the product] in their journey, so it’s a much more relevant outreach,” he explained. 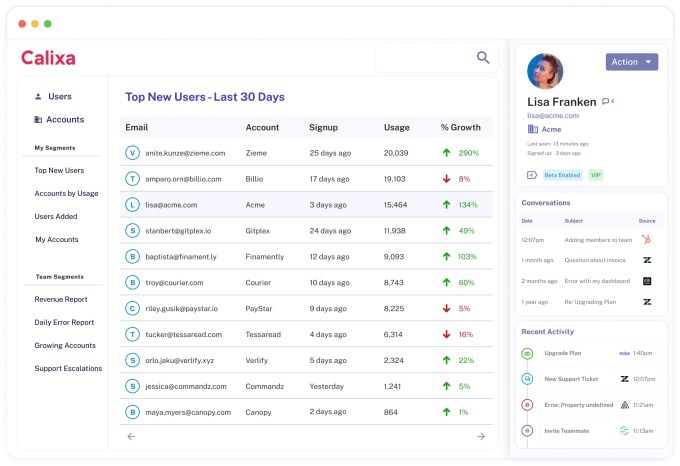 Calixa grabs data from various sources, including a customer’s data warehouse, Segment feed and Salesforce data, and using that information helps identify customers who are most likely to make the move to the pay product. The fact it’s using both Salesforce and Twilio Segment could help explain the strategic investment on the part of these two companies.

The company is up to 12 employees, around double the number when we spoke to him in March for the seed round, and Schiavone hopes to reach 18 by Q1 next year. He says that being a remote-first company should help him build a more diverse team.

“I will say one of the great things about hiring in a distributed world is it gives you access to talent, so you have less and less of an excuse to not have a diverse set of employees because it’s not like your diversity is based on how diverse the San Francisco Bay Area is or whatever city you’re based in. I can hire people from all over the world,” he said.

The company was founded in early 2020 and raised more than $16 million.