Helion Energy, a clean energy company committed to creating a new era of plentiful, zero-carbon electricity from fusion, today announced the close of its $0.5 billion Series E, with an additional $1.7 billion of commitments tied to specific milestones.

The round was led by Sam Altman, CEO of OpenAI and former president of Y Combinator. Existing investors, including co-founder of Facebook Dustin Moskovitz, Peter Thiel’s Mithril Capital and notable sustainable tech investor Capricorn Investment Group also participated in the round. The funding includes commitments of an additional $1.7 billion dollars tied to Helion reaching key performance milestones. Round-leader Altman has been involved in the company as an investor and chairman since 2015.

Fusion energy has been a fiery dream for lovers of clean energy since the first controlled thermonuclear fusion reaction was accomplished some 60 years ago. The technology promises all the benefits of current-generation nuclear fission generators, at a fraction of the risk, with far less radioactivity when running, and with very little radioactive waste. There’s been one catch: So far, it has been hard to get the fusion process to generate more energy than it has been consuming to keep the reaction under control.

Helion, as a company, has been focusing less on fusion as a science experiment and more on a more important question: Can their technology generate electricity at a commercial and industrial scale?

“Some projects in the fusion space talk about heat, or energy, or other things. Helion is focused on electricity generation. Can we get it out fast, at a low cost? Can we get it to industrial-scale power?” asks David Kirtley, Helion’s co-founder and CEO. “We are building systems that are about the size of a shipping container and that can deliver industrial-scale power — say on the order of 50 megawatts of electricity.”

Deuterium and Helium-3 are heated, then accelerated through magnets, compressed and captured as inductive current. Animation courtesy of Helion Energy.

In June of this year, Helion published results confirming it had become the first private fusion company to heat a fusion plasma to 100 million degrees Celsius, an important milestone on the path to commercial electricity from fusion. Soon after, the company announced it had broken ground on building its factory to start the process of preparing for manufacturing of its seventh-generation fusion generator, which the company calls “Polaris.”

TechCrunch was surprised to learn of the company’s $1.5 million round back in 2014, when the company said it would be able to get net power generation of fusion up and running within three years. Here we are seven years later, and it appears that Helion hit a couple of wobbles — but the company also found a focus along the way.

“We ended up pivoting a little bit in direction, to focus less on scientific milestones of energy and focus more specifically on electricity. We had to prove some of the technologies on the electricity, and electricity extraction side of things. We also needed some funding things that had to happen to get us all the way to those technical milestones,” Kirtley reflects. “Unfortunately, that took a little bit longer than we had hoped.” 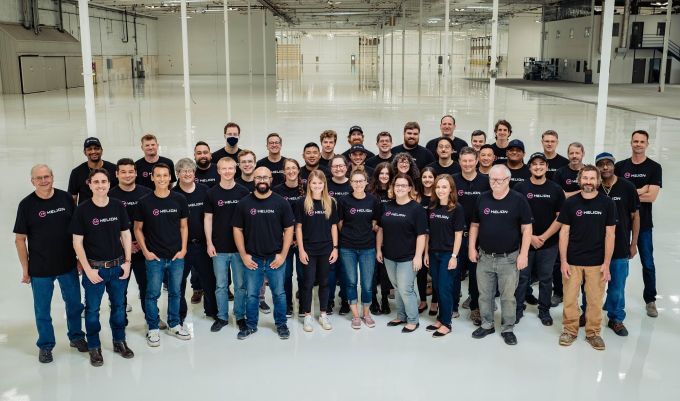 The Helion team standing by to energize you. Image Credits: Helion Energy

As part of the investment round, Sam Altman steps up from being the chairman of the board, to Helion’s executive chairman, with a higher degree of activity, including input into the commercial direction of the company.

“Our first funding round was led by Mithril Capital, and Y Combinator was part of it. That’s where we got introduced to Sam. He has been involved in our fundraising ever since. He is an ambassador that actually understands physics; it’s pretty amazing. We were really pleased that he was interested in leading the investment, rather than us having to bring in external investors that might have been differently aligned and have a less deep understanding of the technology,” Kirtley explains. “He’s seen the successes, and he has seen what they mean. That’s why we’re excited not only to have him as an investor but have him more actively involved. It means we can accelerate the timelines. The funding is part of it, and the technology is another part of it. Ultimately, we need to get it out there in the world, and that’s something Sam can help us do.”

“I’m delighted to be investing more in Helion, which is by far the most promising approach to fusion I’ve ever seen,” said Altman. “With a tiny fraction of the money spent on other fusion efforts, and the culture of a startup, this team has a clear path to net electricity. If Helion is successful, we can avert climate disaster and provide a much better quality of life for people.”

Helion’s CEO speculates that its first customers may turn out to be data centers, which have a couple of advantages over other potential customers. Data centers are power-hungry, and often already have power infrastructure in place in order to be able to accept backup generators. In addition, they tend to be a little away from population centers.

“They have a backup power of diesel generators, giving them a few megawatts that keep the data centers running just long enough to sustain any power grid issues,” Kirtley says, but suggests that the company is more ambitious than just replacing backup diesel generators. The low cost and high power availability mean that the company could start powering whole data centers as the default power source: “We are excited about being at the 50-megawatt scale, and being able to get electricity costs down to a cent per kilowatt-hour. You can completely change how data centers work, and you can really start answering climate change. Our focus is making low-cost and carbon-free electricity.”

Due to physical limitations with the way the power is generated, the current generation of the company’s tech wouldn’t be able to replace your Tesla Powerwall and solar panels — the size of a generator is roughly the size of a shipping container. But at 50 megawatts, the generators could power around 40,000 homes, and with that amount of power, the technology could open some really interesting opportunities for distributed power grids.

“At the beginning of my career, I kept looking at the way we were doing fusion and said hey, you have this beautiful energy that is all electric, including the plasma. And then what do you do? You boil water, you use an old, low-efficiency, capital-intensive process,” explains Kirtley. Instead of going via water, the company decided to skip a step and use inductive energy instead. “Can you bypass that whole era? Could we do the equivalent of bypassing the gasoline engine and go right to electric cars right from the beginning? And so that’s been what we’ve been focusing on.”

The company is aiming to be able to generate more electricity than what it takes to run the fusion reactor by 2024, and the CEO points out that the goal at this point is to generate electricity at a commercial scale.

“Our 2024 date is not a key demonstration of the science at this point. The goal is to go after commercially installed power generation. There’s a huge market, and we want to be able to get this out in the world as soon as possible,” concludes Kirtley.

“By focusing on getting to electricity as soon as possible, we should be able to count on fusion as part of the natural conversation we’re having about climate change and about carbon free electricity generation. We’re really excited we’ve secured this funding, and the amount we raised should be able to get us all the way there.”