The coronavirus pandemic disproportionately reduced venture capital funding for female founders last year, despite a greater boom in fundraising thanks to megafunds and the advent of Zoom investing. The result was an uneven landscape in which capital flowed more toward men than was normal historically.

But the gender gap in startup fundraising is closing slightly, new PitchBook data shows. Female-founded companies raised $40.4 billion across 2,661 deals through the first three quarters of 2021, almost doubling 2019’s total of $23.7 billion and over 10 times 2011’s total of $3.6 billion.

There’s still significant work to be done, as we remain far from even, far from fair and far from seeing enough change to stop tracking this data set. Companies started by women still raise less and receive lower valuations from investors.

While the rising tide of venture hasn’t lifted all boats, we’ll use this data to explore early inklings of a comeback for the historically overlooked group, from funding to exits to decision-makers.

Venture capital totals are surging around the world, bouncing back sharply from a short period of COVID-induced conservatism that caused some startups to struggle to raise capital at the start of the pandemic. PitchBook, which analyzed investment activity in U.S.-based startups with at least one female founder, shows that female founders are breaking records in this environment.

If you didn’t expect to see improved numbers for female-founded startups this year, you weren’t overly pessimistic: In 2020, despite rising venture capital totals in general, U.S.-based startups founded by women actually saw their deal count fall by 2% and total dollars invested in their enterprises fall by 3%.

As the venture capital pie got larger, female-founded startups raised fewer dollars from fewer rounds, a sharp decline compared to previous years. PitchBook said that in 2019, female founders landed 150 to 200 deals per quarter, worth between $700 million and $950 million. In Q3 2020, the cohort only landed 136 rounds, worth just $434 million. That was in an upmarket.

In better news, thus far in 2021, the backsliding has more than stopped. Indeed, it has shot the other direction.

The headline number of $40.04 billion for U.S.-headquartered, female-founded startups actually doesn’t pay enough respect to the accelerating pace at which female founders have raised capital. Observe the following chart from the PitchBook-NVCA report: 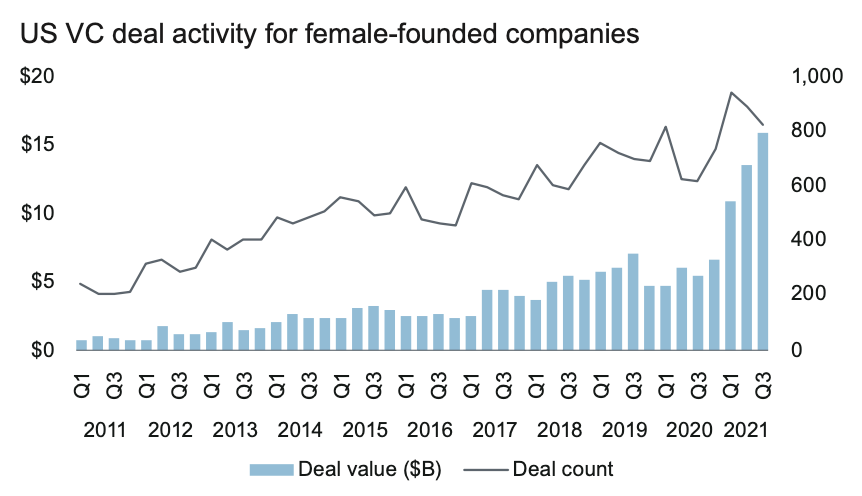 The data is clear that female-founded startups just had their best quarter on record in terms of total deal value, despite a modest dip in deal volume from recent all-time highs. This chart is more than bullish, just as its 2020 data points are gobsmackingly bad.