Alternative assets, from bottles of fine wine to non-fungible tokens to even fractional shares of physical art, are becoming a mainstream form of modern investing. As consumers diversify their portfolios away from traditional public equities, New York-based startup Aqua is betting that the future may look a little more private.

Co-founded by Rohan Marwaha and Dev Patel, Aqua wants to help any investor have access to private equity funds, an investment vehicle that has traditionally been reserved for high net-worth individuals or institutional investors. By getting savvy investors to put money into a PE fund instead of the S&P 500 or Cartoon Ape, Aqua thinks it can blend stable returns with diversified assets.

“There’s all of this general proof that investors are excited, investors are ready and they understand what the new asset classes are,” Marwaha said. “Where we draw the distinction is that, in private equity funds, it’s a little bit less risky, but it’s part of the same trend.” 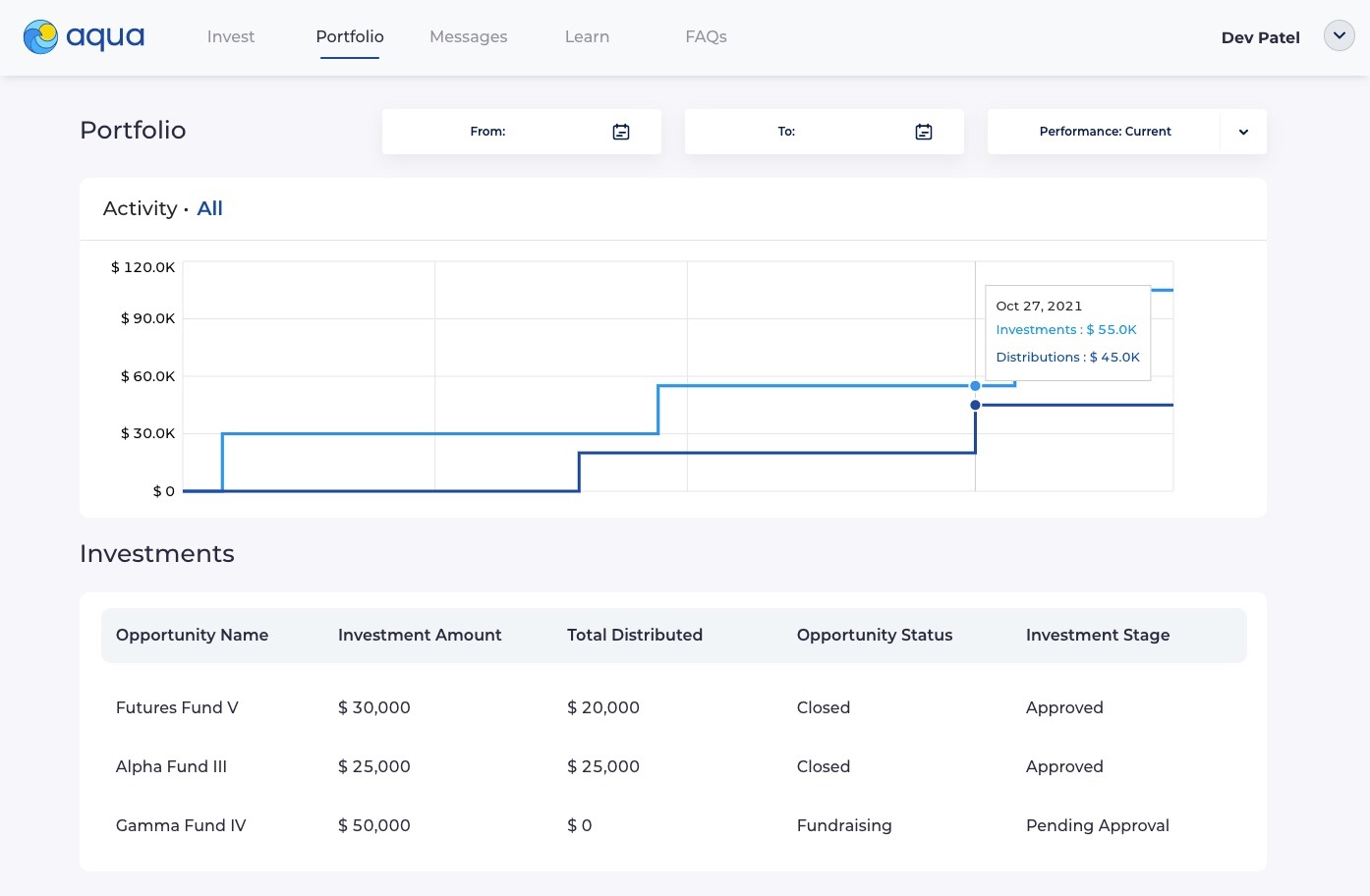 Aqua is a two-sided marketplace. It helps private equity firms deal with the back office, logistical work of handling smaller investors, while giving those same investors access to opportunities with minimums of $10,000 — instead of a traditionally higher range between $250,000 and $25 million. The startup, still pre-launch, declined to share any information about early usage on its platform or customer engagement.

Marwaha saw inefficiencies within the private equity system while working as an analyst at Blackstone, an investment group where he worked for less than a year. He noticed that most processes within private equity firms are completed by hand, on paper or through fax machines. The archaic processes disincentivize PE firms from pursuing smaller investors, since coordination for capital calls and eventual returns is even harder to pull off. 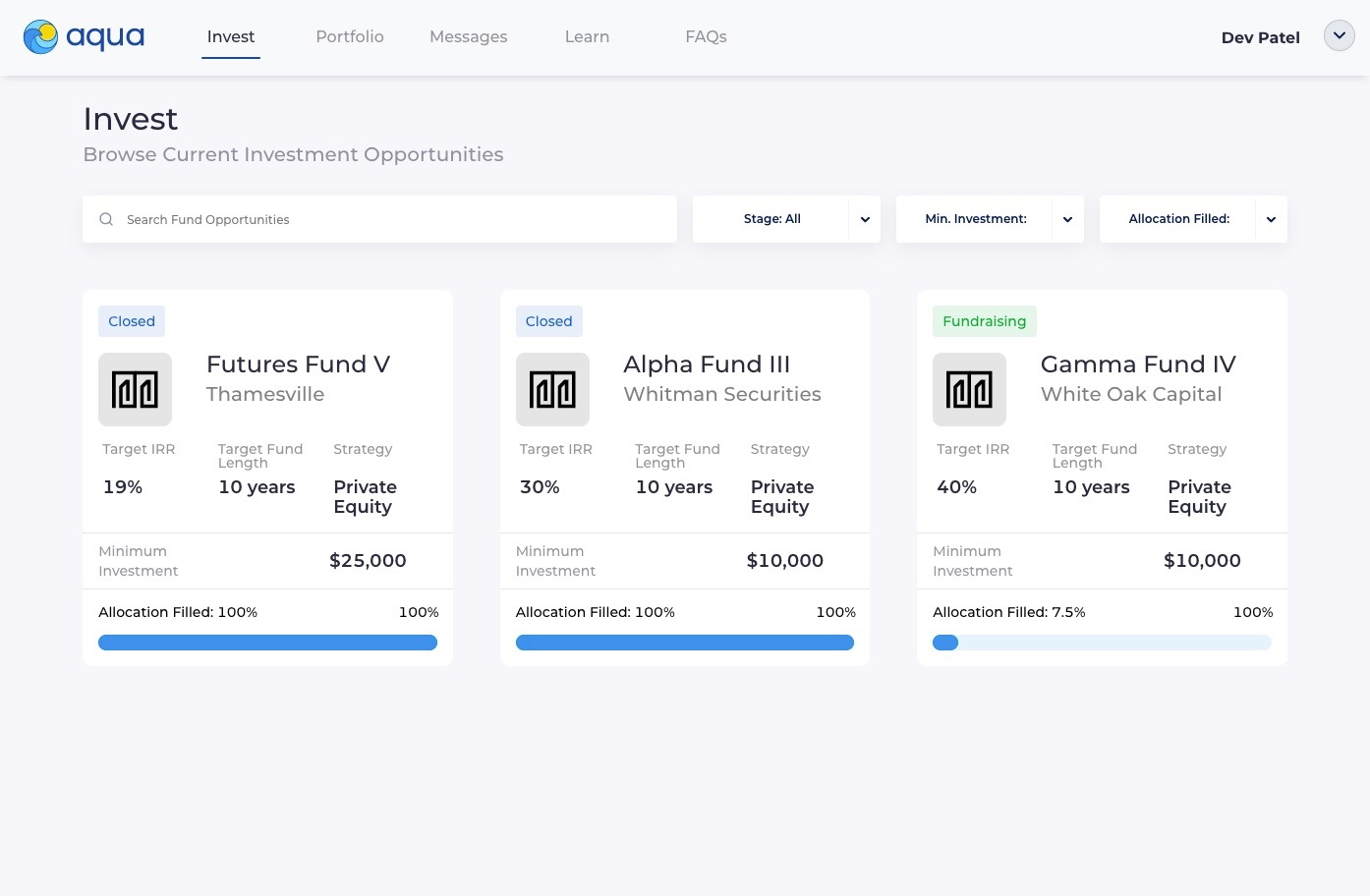 The co-founder argues that the logistical woes of dealing with smaller checks aren’t hindering interest from PE firms.

“A tech-enabled solution, where we deal with all the back office work of dealing with the smaller investors, would be a huge value add to private equity,” he said. “They want access to dollars to continue to grow their funds and new opportunities, they just don’t want to have to deal with administrative stuff.”

From an integration perspective, Aqua acts like an LP for PE firms. It operates a single entity on a PE firm’s cap table on behalf of the consumers that are pouring smaller checks into the fund. When and if returns come, Aqua then distributes the profits to every investor that puts money into the pipeline.

Persuading PE firms to use the service for fundraising will be the biggest early challenge for Aqua. After all, how can you bet that a firm will try out a new experimental service if its processes are built atop an entirely different ethos? Marwaha pushed back on this characterization, saying that “there were always people interested in [private equity funds] but it was just too difficult for the [firms] themselves to take on their capital.”

It doesn’t hurt that Aqua isn’t charging firms a dime for its services.

Aqua, at least for now, doesn’t cost a penny for PE firms to use. Instead, the startup makes money through normal return cycles, only cashing in when its customers do. Because distributions aren’t as predictable as, say, recurring revenue from a SaaS subscription, Aqua is exposing itself to some volatility: returns can take anywhere from seven to 10 years. The team is working to make sure it has a good diversity of assets, with rolling return options, for the health of its business (and I’m sure, the delight of its consumers). Aqua is also experimenting with options in which individuals can buy and sell portions of funds during designated times of the year.

The next big startup may just help venture back more startups

The strategy has convinced a slew of early backers and partners. Aqua has landed a partnership with Permira, an asset manager with over $50 billion under its umbrella. The company also announced that it has raised a $2.5 million seed round led by Gradient Ventures, Google’s AI-focused venture fund, with participation from Y Combinator. With the early validation, the two founders plan to hire eight more people within the next six months.