SVB Capital reinvested in this extension round and other existing investors such as Deciens Capital, Ribbit Capital, Bezos Expeditions, One Way Ventures and Tribe Capital.

While new investors also participated, they remain unnamed at the moment. The company’s total Series C stands at $250 million but its total funding to date is over $305 million.

During TechCrunch’s last conversation with CEO Ham Serunjogi, when the company announced its Series C round, he called Chipper Cash “the most valuable private startup in Africa” without specifics on the actual value.

The statement was left open for interpretation and several debates have sparked since then on whether Chipper Cash is a unicorn or not. Well, Serunjogi can confirm that Chipper Cash is indeed one now, as this extension round takes its valuation slightly above $2 billion.

This year, the company began to make strides outside the continent. In May, it expanded to the U.K., allowing people to send money from the European nation to Chipper Cash’s African markets. 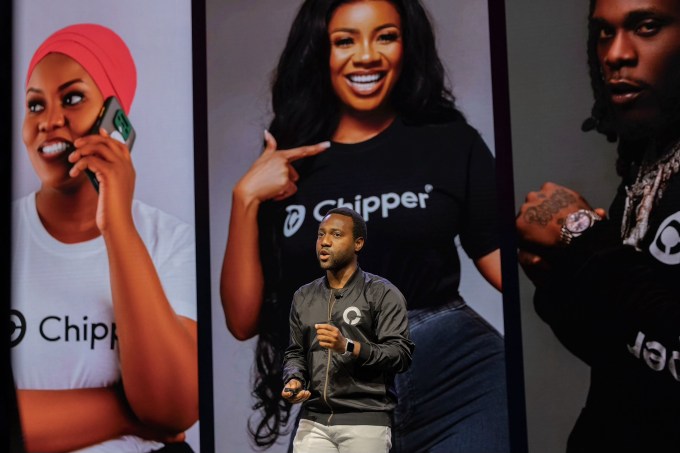 Last month, Chipper Cash, with over four million users, ventured into the already competitive U.S. to Africa corridor with established players such as Wise, MoneyGram, Sendwave and Remitly; the U.S. is responsible for almost 30% of the international remittances to sub-Saharan Africa.

Though the margins for remittances are small, the market has grown exponentially for the better part of the past decade, except last year when total remittances stood at $42 billion, down from $48 billion in 2020, per the World Bank.

Considering how expensive it is to send money to sub-Saharan Africa (it is the most expensive region to send money globally), Chipper Cash’s play is to offer the “best prices” and also facilitate money movement from Africa to the U.S.

“Chipper Cash is offering remittances considerably cheaper than anyone else,” Serunjogi told TechCrunch over a call. “More important to that is that we are now the first ones that I know honestly to be able to support Africa to the U.S. in terms of sending money.”

Platforms such as WorldRemit already allow specific African countries like South Africa to send money to the U.S., so Chipper Cash is not entirely the first to try to offer such a service.

With that said, Serunjogi says peer-to-peer money movement from the U.S. to Nigeria and Uganda is currently live for users in those markets. The company will roll out the service to users in Ghana, South Africa and Kenya before the end of the year.

For outflow payment services — sending money from Africa to the U.S. — the CEO says that users in Uganda, South Africa and Kenya will be the first to get access next year.

Chipper Cash has also been busy tapping into the world of social payments. Earlier this year, Twitter launched its Tips feature, also known as Tip Jar, to allow creators to receive money on its platform. The social media company integrated with some payments platforms to make it accessible in different regions.

As creators in developed markets can select PayPal, Patreon, GoFundMe, Cash App and Venmo to receive tips, Chipper Cash was picked to offer the service to African creators through its payments link.

“The idea for Twitter and ourselves is to offer multiple ways for creators to be able to be paid for their work and their contribution online,” said Serunjogi.

“And Twitter worked with us on this given our presence as the largest cross-border payments platform in Africa that could support multiple countries for Africans using Twitter.”

Chipper Cash plans to make its Tip Jar integration accessible for users in the U.S. by next year, said Serunjogi.

The partnership with Twitter and cross-border expansion to the U.S. shows the growth opportunity for Chipper Cash and the funding from FTX only makes it more glaring.

FTX is one of the largest cryptocurrency derivatives exchanges in the world. Last month, the company raised a $420 million round at a $25 billion valuation.

Sam Bankman-Fried runs the company and is also the co-founder of Alameda Research, a quantitative trading platform. Via FTX, he has invested in many businesses, including blockchain startups Sky Mavis and Circle and brokerage trading company DriveWealth (Chipper Cash recently partnered with DriveWealth to offer U.S. stocks to Ugandans).

Chipper Cash is FTX’s first investment in Africa and continues the plethora of signs pointing to serious crypto growth and recognition on the continent. This past year, crypto adoption in Africa grew more than 1,000% from peer-to-peer transaction volume totaling $105 billion, according to Chainalysis.

But Bankman-Fried maintains there is yet more room for adoption. “Despite the recent growth in Africa, moving money across the continent is still slow and expensive. Unsurprisingly it is the fastest growing market with grassroots crypto adoption,” he told TechCrunch.

The FTX boss added that FTX’s partnership with Chipper Cash is to “make money transfer as simple as a text message and accelerate the adoption of crypto within Africa and beyond.”

Given Bankman-Fried’s statement and Chipper Cash crypto tests in Uganda and South Africa, it is hard not to see the company using crypto to effect its peer-to-peer money movement within and outside the continent.

Another instance where the partnership proves beneficial is with Chipper Cash’s Network API. It fundamentally allows developers to leverage the company’s infrastructure to collect and disburse payments into Chipper wallets. In essence, Africans who use FTX will have the option to “Pay with Chipper Cash” on the crypto trading platform.

“That’s going to be a compelling use case for both of our companies as we keep scaling and as FTX keeps scaling their geographical coverage,” the CEO said. “They do some of the most innovative work in the crypto space, so working with them is going to be quite exciting.”

Serunjogi says the investment is a crucial repricing event for the company and gives it a strong balance sheet to continue scaling and “maintain our lead in the space.”

Closing back-to-back equity rounds in months, to an extent, has become the norm in markets like the U.S., Europe, India, and Latin America. However, it’s only just picking up speed in Africa.

The sector remains the most funded on the continent. It has produced the most unicorns, with Chipper Cash — the most valuable startup on the continent alongside OPay — officially becoming the fourth this year after Flutterwave, OPay and Wave. It’s the fifth overall unicorn after tech talent company Andela reached the status in late September.

In general, however, the continent has six current unicorns, including Interswitch, a fintech giant that attained a billion-dollar valuation in 2019.