Major League Baseball is experimenting with robot umpires to make games more interesting, but when it comes to sporty shenanigans, Internet League Blaseball has got you more than covered. After going on hiatus at the end of its public beta, the free, browser-based, absurdist baseball simulator is coming back. On November 1, the Hugo- and Nebula-nominated game will launch Short Circuits, a “short, low-stakes, mini-series of temporary universes” designed to onboard new fans into the delightfully messy realm of Blaseball.

Developed by The Game Band, Blaseball is just a fantasy fantasy sport at first glance — you pick your team and bet on games, but players are named Peanut Bong, PolkaDot Patterson and Jaylen Hotdogfingers instead of something like… David Ortiz? Derek Jeter? Alex Rodriguez? But with its broad world-building, rogue umpires and high-stakes boss fights against peanut monsters, Blaseball is just as appealing to “Dungeons & Dragons” roleplayers as it is to people who know what an RBI is. There’s a detailed plot to all this, which fans influence through voting in end-of-season elections. The developers say that the key difference between baseball and Blaseball is player participation — fan decisions can impact the course of the league, even changing the rules of the game. The collaborative nature of the game helped Blaseball develop a deeply devoted fanbase — there are podcasts, musicals, fan-run charity shops, data analysis hubs and news outlets, even a prolific, international rock collective. 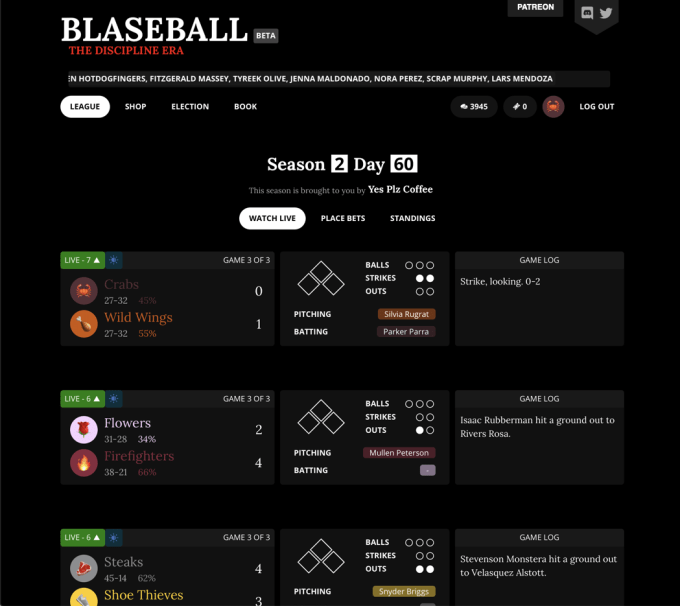 But if “broad world-building, rogue umpires and high-stakes boss fights against peanut monsters” has you feeling confused, you’re not alone. As the small team of developers found their footing over 24 week-long seasons, the lore and plot of the game started to become too confusing for even the most devoted fans to follow.

So, with a $3 million seed round in tow, the Blaseball developers are exploring ways to make the game more manageable to run and more accessible for new fans. They nullified the existing story line by absorbing the league into a Black Hole (don’t worry about it) and went on hiatus in July.

Now, Blaseball will attempt to woo fans new and old with Short Circuits. This series of short tests will bring Blaseball back to basics, making it easy for new fans to get into the game. Each Short Circuit will last two weeks, and after each one wraps, The Game Band will send users surveys about their experience with mechanics new and old. Short Circuits will also allow Blaseball to test new betting and election systems, integral parts of the game that haven’t been meaningfully updated since Blaseball first launched in July 2020.

To check out the first Short Circuit, users can sign up on blaseball.com, where the games will kick off on November 1 at 8 AM PT.