Chinese smart electric vehicle startup XPeng has announced a series of innovations that it says will help it craft the mobility ecosystem of the future.

“Our exploration of more efficient, safer, carbon-neutral mobility solutions goes far beyond just smart EVs, and is the cornerstone of our long-term competitive advantages,” said He Xiaopeng, chairman and CEO of XPeng, at the startup’s 2021 Tech Day in Beijing on Sunday. “We strive to implement cutting-edge mobility technologies in mass-production models for the benefit of our customers.”

Xiaopeng went into detail on the company’s latest versions of its advanced driver assistance system (ADAS), its supercharger network, a next-generation flying car built with HT Aero and its robotic unicorn for kids.

Xpilot 3.5 will be designed for city driving 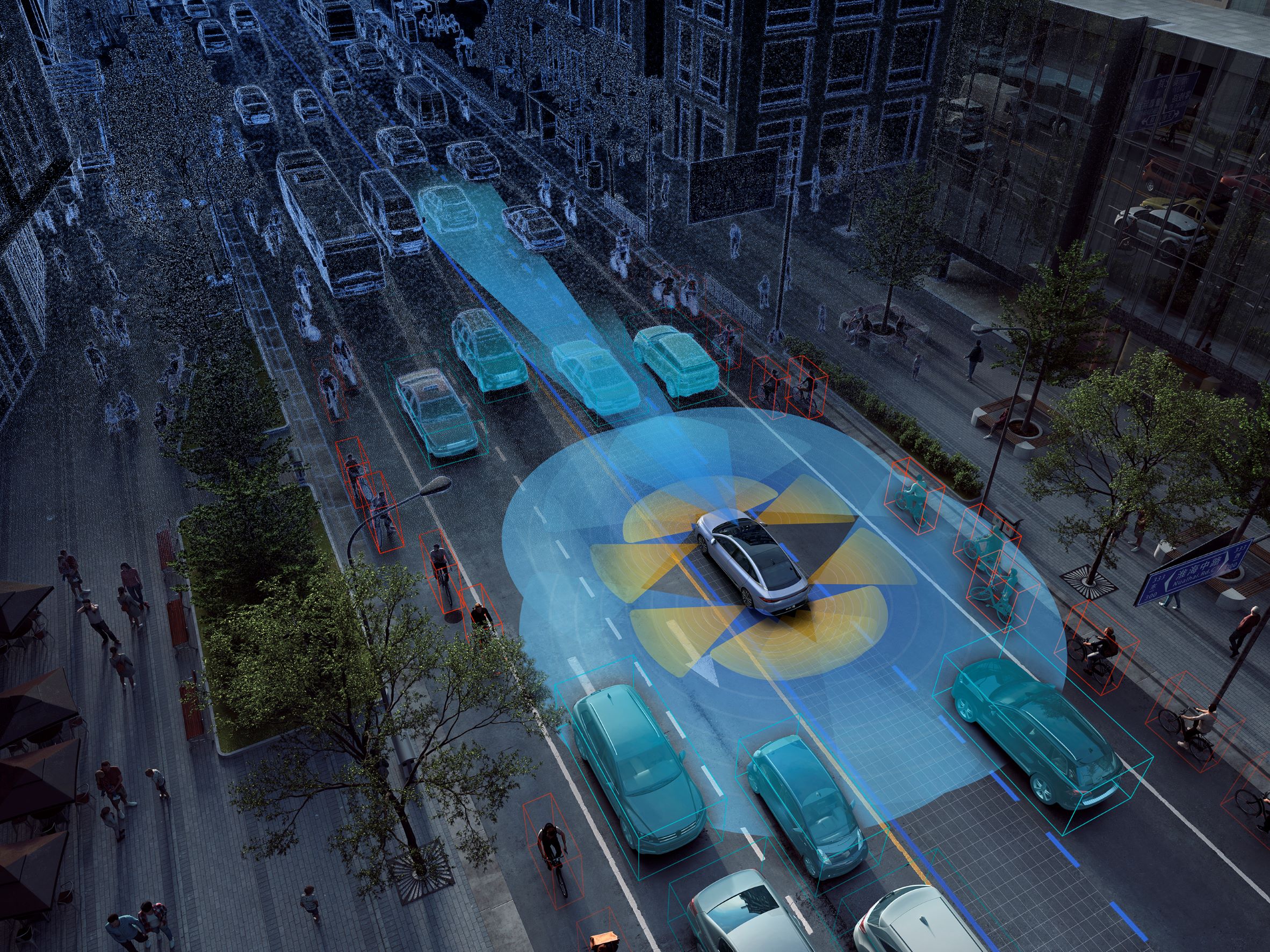 XPeng is planning to roll out the next generation of its ADAS, called Xpilot, to drivers in select cities during the first half of 2022. Xpilot 3.5 will feature “City Navigation Guided Pilot (NGP)” and will only be available to drivers of XPeng’s P5 family sedan, which can be built with lidar, millimeter-wave radar and a 3D visual perception network that can recognize, classify and position multiple targets — all of which is essential for city-level NGP.

The last Xpilot version, 3.0, which was available to drivers of XPeng’s P7 sedan, handled highway-level NGP, through which XPeng was able to gather nearly 12 million kilometers, or 7.5 million miles, of data.

Xpilot 3.5 will have a strategic planning module with advanced prediction capabilities that uses a combination of rule-driven and data-driven AI to handle city scenarios, like avoiding static objects and vulnerable road users, as well as lane changing at any speed, according to XPeng.

XPeng’s approach to reaching full autonomy is similar to Tesla’s, in that it aims to go through Level 2 autonomy, or ADAS systems, on its way to reaching Level 5. (SAE International describes Level 2 autonomy as a system that mainly has support features, like adaptive cruise control and brake support. It describes Level 5 autonomy a system that can drive anywhere under all conditions.) Last month, Tesla released a software update that allows customers to request access to its Full Self-Driving Beta (FSD Beta) software. FSD includes capabilities like automatic lane change, moving into and out of parking spots and autosteering, which is currently not yet available for city streets. Tesla has given no date as to when it will bring this capability to cities, but it will be powered using only vision and neural network processing.

“Human-machine co-pilot functions will remain critical for the foreseeable future,” said XinZhou Wu, VP of autonomous driving at XPeng, during the event. “Our mission is to progressively transition from advanced driver assistance to full autonomous driving, with a clear roadmap to first completely connect all driving scenarios. Our closed-loop data operation, software iteration and mass production capability — all created in-house — put us in pole position to significantly improve safety and resolve the industry’s long-tail issues.”

Just as Tesla charges for its FSD software, so does XPeng for its Xpilot. XPeng didn’t say how much version 3.5 would cost, but version 3.0 currently costs about $3,200 (RMB 20,000), which can be purchased outright or paid for via annual subscription, an XPeng spokesperson told TechCrunch.

XPeng’s Xpilot 4.0, which is planned for a roll out in the first half of 2023, would give the startup an edge on its race to full autonomy. The plan is to be the first to deliver full-scenario assisted smart driving experiences, from turning the vehicle on to parking it and everything in between.

This version of Xpilot will require a lot of compute power, so XPeng is building a hardware upgrade for version 4.0, “with 508 TOPS ECU compute power supported by two Orin-X autonomous driving system-on-a-chip (SOC) units, 8-million-pixel front-view binocular camera and 2.9-million-pixel side-view cameras (covering front, rear, left and right view), and a highly integrated and expandable domain controller,” the company said in a statement.

A spokesperson for XPeng told TechCrunch Xpilot 4.0 will not go into any of the automaker’s existing vehicles, but rather will end up in an as yet unannounced vehicle. It’s likely that this new model will be an SUV, says the spokesperson, but XPeng hasn’t released any information about it so far.

By the end of next year, as XPeng prepares to bring Xpilot 4.0 to market, the automaker aims to have 75 million miles of highway NGP driven and 22 million miles of city NGP driven, as well as a 90% penetration rate of its memory parking function, Valet Parking Assist (VPA).

XPeng also stressed the importance of safety when churning out all of this ADAS, and smart driving is only one aspect of that. The startup announced an upgrade to its user interface and operating system. The Xmart OS 4.0 promises a detailed display complete with a 3D rendering of the environment surrounding the vehicle. The OS will roll out next year in new vehicle models, said Xiaopeng. XPeng is also rolling out version 2.0 of its voice assistant, which it says can listen, process and execute at the same time, to help make rides smoother for drivers.

Finally, just as Tesla has released a safety score for drivers looking to test its FSD Beta software, and also get heaps of data for its budding insurance line, XPeng is unleashing a safety test to help drivers understand the boundaries of the Xpilot before activating it. Drivers will receive a smart driving score before they are able to use Xpilot, and if the driver monitoring system finds them to be driving irresponsibly down the line, it will deduct points from their overall score and possibly revoke Xpilot access.

Superchargers that give up to 125 miles range in five minutes

If XPeng wants to create the smart mobility ecosystem of the future, it needs to power it. The startup already has 1,648 free charging stations in its network and 439 branded supercharging stations throughout China, but during its Tech Day, XPeng revealed plans to produce its next generation “X-Power” superchargers based on a 800V high-voltage mass-production Silicon Carbide charging platform.

The X-Power chargers will be able to give EVs enough juice to go up to 200 kilometers, or 125 miles, in just five minutes, and an average of 30 vehicles can be charged on one supercharger at a time, says XPeng. The startup is also planning to roll out lightweight 480 kW high-voltage supercharging piles, which come with XPeng vehicles so owners can charge their cars, for the first time. In order to support this supercharging network, XPeng says it will launch power storage facilities in both piles and mobile vehicles.

XPeng did not share when this new charging tech will make it to market.

A flying car that also drives

At the event, XPeng revealed its new goal to become the world’s top low-altitude manned flying vehicle manufacturer, in large part fueled by its mission to create its sixth generation flying car. But this is not just any flying car. This one will also be able to drive on the road.

A video presented during the event showed a rendering of a very sexy looking car, even sexier than the XPeng P7, that converts from a normal car to a flying car through a foldable rotor mechanism. XPeng says the low-altitude flying vehicle will be 50% the weight of the P7 and be about 18 feet in length at first with plans to make it shorter eventually. It’ll have both a steering wheel for road operations as well as a single lever for flight modes.

The new flying car will also feature an advanced environmental perception system that can fully evaluate the surrounding environment and weather conditions to conduct safety assessments before take-off, says the company. The system will evaluate the data it picks up against driving objectives to ensure a safe take-off and landing, and during the flight the advanced perception and flight control algorithm will be used to avoid obstacles.

XPeng is planning to begin mass production for this contraption, which is being developed by XPeng affiliate urban air mobility (UAM) company HT Aero, as soon as 2024. The final design, which Xiaopeng said would be more understated than the current renderings, is to be decided sometime next year. The CEO also said XPeng is aiming for the cost to be lower than $157,000 (RMB 1 million).

Last week, XPeng led HT Aero’s $500 million Series A raise, and HT Aero has produced other UAM vehicles for XPeng, most recently the XPeng X2, which is XPeng’s fifth gen flying car that can seat two people. A spokesperson from XPeng told TechCrunch the sixth gen flying car will be built for similar city use cases, like going from the office to the airport, or other similar trips under 30 minutes of flight time. XPeng’s philosophy is to sell direct to consumer, so it’ll be interesting to see how low-altitude air regulations shift to handle a rather fast go-to-market strategy. Xiaopeng said he hopes to work with regulators to get to a place where XPeng can legally mass-produce flying cars for private use by 2024, but didn’t go into more detail.

Riding the path to smart mobility on a robotic pony

Last month, XPeng teased a pony-style robot that kids could ride and interact with. The quadruped would ideally be so perceptive that it would be able to detect human emotions. During its Tech Day, XPeng went into further detail about how it foresees smart robots like this pony becoming an intelligent platform for an integrated smart mobility system that can address far more complex autonomy challenges than vehicles. 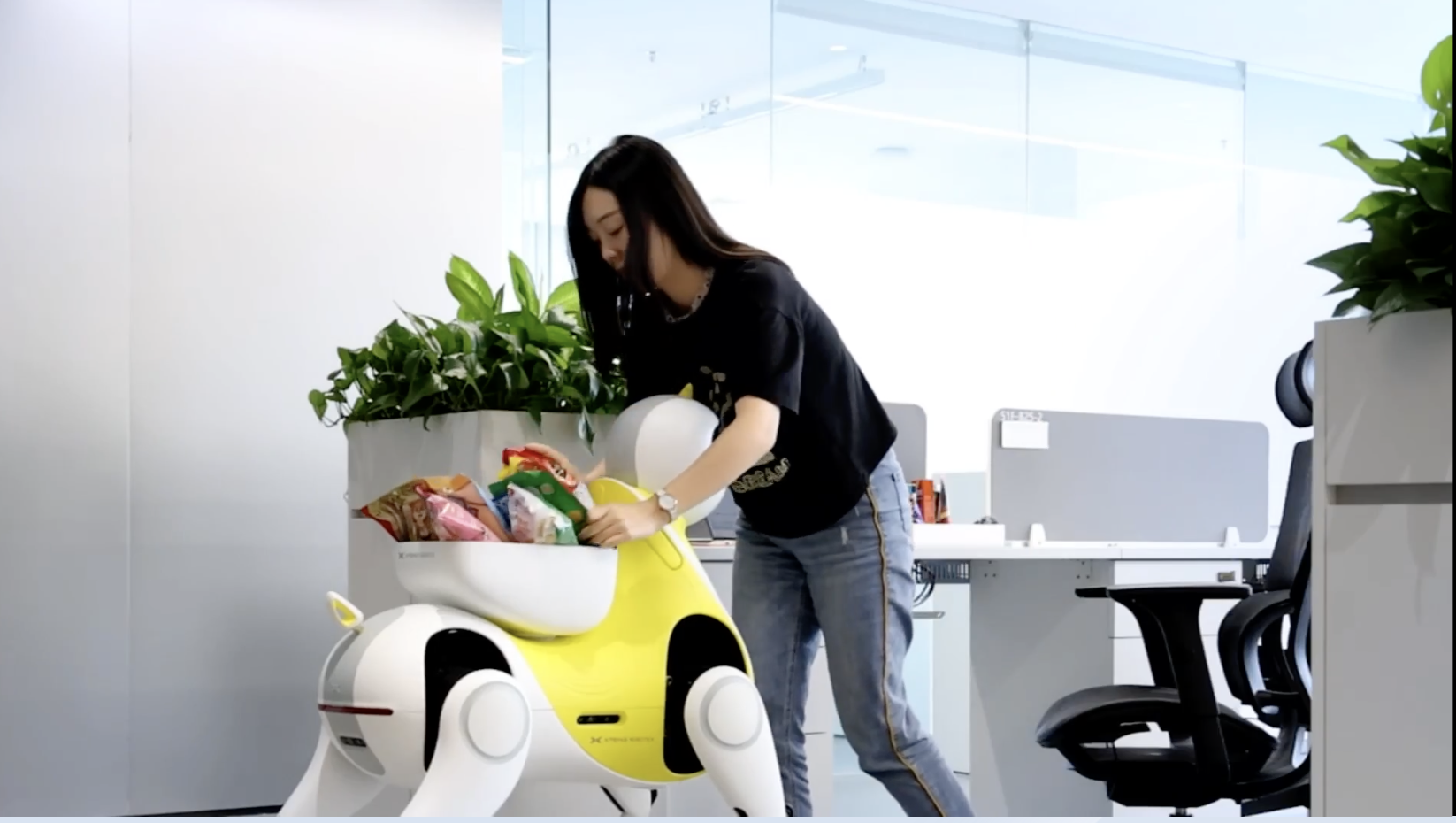 Woman in office loads XPeng robotic pony with treats to be delivered in a video presented during XPeng’s 2021 Tech Day. Image Credits: XPeng

And it’s not just for kids. During the presentation, XPeng played a video demonstrating how the cute robotic pony could be used to deliver snacks and other parcels in an office setting – a nod to the horse’s historic role in mobility history to transport objects. (In that same video, XPeng possibly teased another robotic animal that was also hanging out in the fictional office, and this one looked a bit like Xiaomi’s creepy robot dog.)

Xiaopeng said XPeng is leaning towards creating a quadruped like a pony rather than a bipedal robot because four legs are more stable than two. During Tesla’s AI Day, the company announced its plans to create a bipedal humanoid robot to handle human tasks like grocery shopping.

The robot will be trained to perceive a diverse environment and multiple targets with 3D route planning, and it’ll be able to recognize users through facial, body and voiceprint, says XPeng. It is also experimenting with technologies like dynamic acoustic mapping, bionic hearing, a bionic sense of smell and even a bionic tactile experience through plantar and fingerprint touch and skin sensing. XPeng’s robots will have a 360-degree camera module and lidar sensing system, as well as object recognition and sound field sensory technology so that it can get the most precise model of the environment to interact with.

During the event, Xiaopeng mentioned that by next year, two major iterations to the robotic pony would make it look completely different than the renderings XPeng has displayed today. A spokesperson for XPeng told TechCrunch that there’s no timeline on a path to market for the robotic pony, as of yet, but there is a prototype that’s still in the development stage. Given the immense AI and hardware challenge for XPeng to create a fully autonomous robot and the price tag associated with that challenge, it’s safe to assume the company is many years out from commercializing this tech.

This news is developing. Please check back in for updates.