Ishveen Anand grew up in England playing sports all of her life, including during her time at Oxford. She wanted to do something sporty for a career and “fell in love” with sponsorship marketing.

However, what she found was that the process was inefficient — the sports world was slow-moving in terms of brands getting contracts with athletes. She thought with the rise of influencers, there should be something like an “Airbnb meets LinkedIn” for the industry, Anand told TechCrunch.

Combining both of her passions, in 2016, she started OpenSponsorship, a sports sponsorship company, with Ron Nesbitt, and today, announced a $4 million growth round. 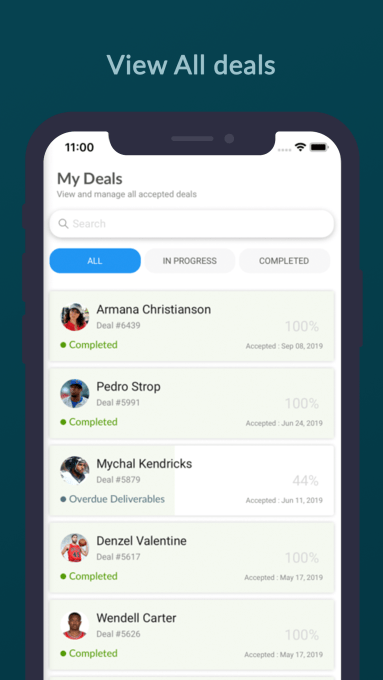 The round is led by Philadelphia 76ers owner David Blitzer, who is joined by Eric Stern and executives from WWE and Excel Sports Management. Other notable investors include Jeffrey Talpins, Alex Jung with Isos Capital, NHL player Alex Killorn, and Nike director Shaherose Charania.

The new funding will be used to continue building out the product and integrations. Anand plans for expansion into new verticals, sales and marketing.

OpenSponsorship has 15 employees and is on target to do $5 million in top line revenue and $1.5 million in net revenue this year, and has facilitated over 10,000 deals across 400 brands.

Brands create an account on OpenSponsorship by choosing a subscription plan. Then they can search through athletes, teams and events, including filtering down to those that fit a need, like social media, logo placement or appearances. Then the user will create a campaign and either choose an athlete or let OpenSponsorship do the work. From there, the brand can launch and measure the success of the campaign.

“Sponsorship is a $60 billion industry, and we are redefining what sponsorship means,” Anand said. “It can be digital, repurposing content and photoshoots. We want to make sponsorship cool and accessible.”

Prior to this latest funding, the company raised a pre-seed round of $1.3 million from investors that included 500 Startups after being in their program in 2016. Since then the company touts the largest marketplace of athletes, over 11,000, and works with companies like Walmart, Foot Locker and Levi’s.

Anand finds that local advertising benefits from sports sponsorships because athletes often stay in their hometowns. And with influencer marketing skewing female, some of her clients find athletes help them reach male audiences.

The additional funding will enable the company to test new verticals, like music, which she finds has a similar supply and demand.

“People want to have flexibility, but traditional sponsorship didn’t always allow for that,” she added. “Instead, brands were locked into multiyear contracts with one athlete. We have come a long way, and if you have a $100,000 budget, you can now spread it over 10 athletes and have variety across the industry.”