Prior to the COVID-19 pandemic, TripActions was primarily known for merging many aspects of corporate trip booking — flights, hotels and rental cars — with expense tracking.

But Palo Alto-based TripActions was among the startups that was hit very hard by the COVID-19 pandemic. In fact, the global crisis resulted in its revenue dropping to $0, according to CEO and co-founder Ariel Cohen. In March 2020, the company made headlines for laying off nearly 300 employees in the face of a slowdown in business related to the pandemic.

It was at that point that TripActions made the decision to accelerate the timeline for its fintech expense product, TripActions Liquid, which had launched only a month before the pandemic. As the pandemic led to increased digitization across the board, employees were suddenly making spend decisions from outside the office and more merchants were accepting digital payments.

“We realized quickly that we needed to meet the needs of our customers to manage not only travel spend, but all employee spend of company money,” Cohen told TechCrunch. “We knew that employees were dispersed and that, instead of travel, they would now be expensing home office equipment and virtual software. And so we broadened the types of expenses employees could submit.”

That pivot has proven to be a smart move for the company, which today announced it has raised $275 million in a Series F “growth” funding round at a $7.25 billion valuation. Greenoaks led the financing, which also included “strong participation” from Elad Gil, Base partners and “all key existing financial investors.” Previous backers in the company include Andreessen Horowitz (a16z), Zeev Ventures, Lightspeed Venture Partners and Group 11.

TripActions closed a $155 million Series E investment earlier this year at a valuation of nearly $5 billion. With the latest round, the company has raised a total of $1.3 billion since its 2015 inception — about $780 million of which was secured during the pandemic.

The latest financing is notable for a few reasons. For one, it signals an expansion for TripActions from being a primarily “corporate travel” startup to also, more broadly, a spend management company. This means it is in the same category as fast-growing fintechs such as Brex and Ramp. But the biggest difference, in Cohen’s view, is that those two companies “are disparate from travel” and thus focus more on SMEs while TripActions is more focused on enterprise companies.

“Just as TripActions continues to disrupt the corporate travel market, TripActions Liquid is set to replace traditional spend management solutions,” he said. “No other company is able to provide a single, unified T&E [Travel & Expense] solution for enterprise companies on a global scale.” 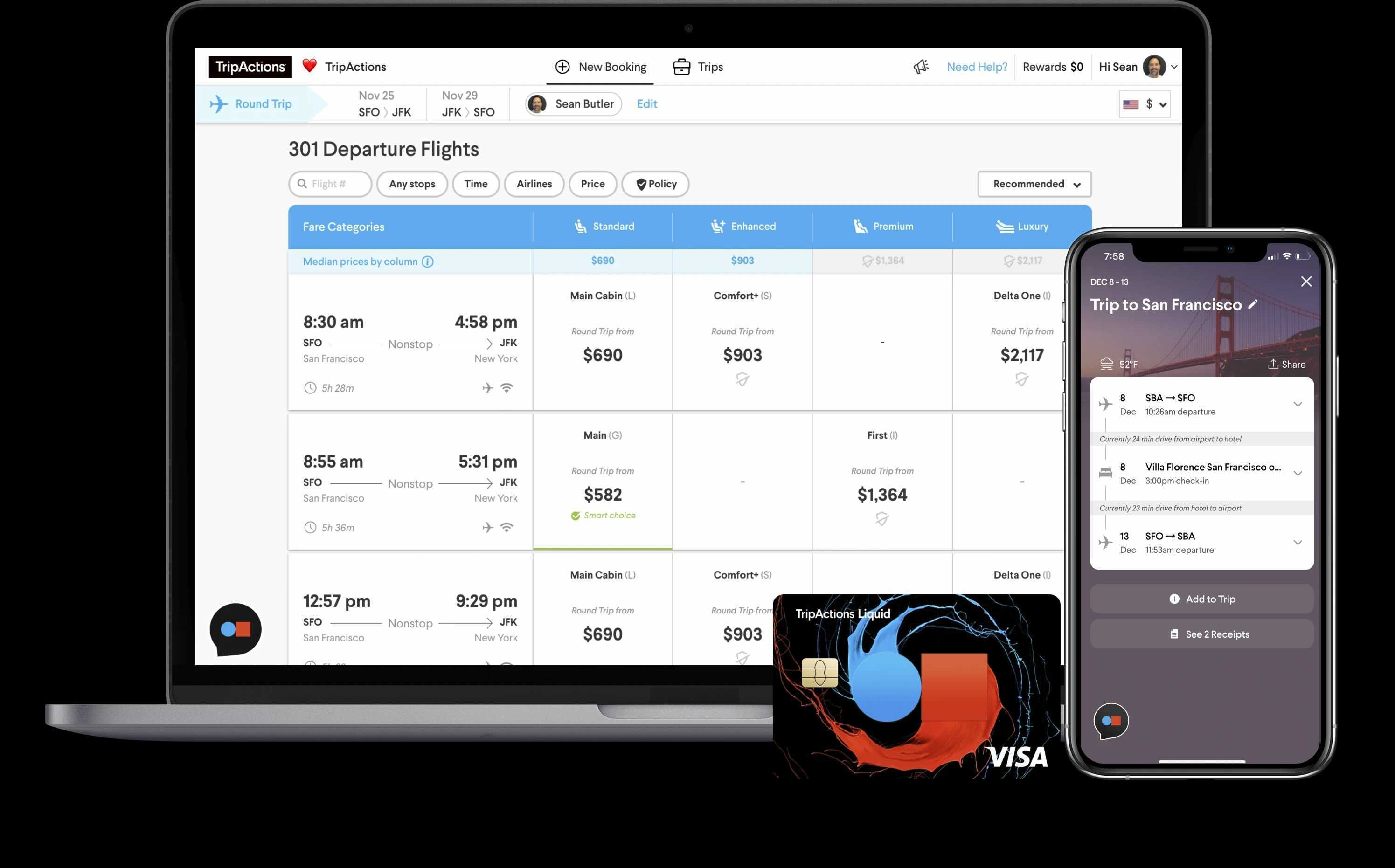 While Cohen declined to reveal hard revenue figures, he said TripActions has now exceeded pre-pandemic levels in terms of booking volume and revenue. The startup, Cohen added, has more than doubled its aggregate travel budget under management, while expense budget under management grew 1,400% over the same period. And, in the past six months, TripActions Liquid has recorded more than 500% growth in transaction volume and nearly 400% growth in active users. Recent enterprise customer wins include Heineken, Snowflake, Thomson Reuters and Adobe.

TripActions presently has 1,500 employees compared to about 800 when it conducted layoffs in March of 2020.

The company plans to use its new capital primarily to double down on TripActions Liquid, its fintech payments and expense management solution, with the goal of expanding more globally.

It is also planning a “deeper” investment in Reed & Mackay, an agency that it recently acquired that provides high-end support (including VIP and M&E for TripActions). TripActions is also planning a broader expansion in Europe, which has grown to represent 30% of its business. Specifically, the company intends on adding more than 150 headcount in the United Kingdom, Israel and across Europe this fiscal year.

The company also plans to continue to invest in core travel with the goal of becoming “an essential tool for companies as they enter the future of work.” In particular, it will continue to ramp its personal travel booking offering, Lemonade, which Cohen says has grown nearly 10x in booking volume this fiscal year.

“A sea change is underway in the corporate travel and spend industries as companies look for powerful and streamlined travel solutions in the post-pandemic economy,” said Neil Mehta, founder and managing partner of Greenoaks, in a written statement. “TripActions is rapidly gaining traction among some of the world’s largest enterprises, and no company is better positioned to lead the way as global travel recovers.”

Investor Elad Gil, who recently raised his own fund, describes TripActions as “an N-of-1 company in a massive TAM.”

The company has executed well and continues to do so, he said.

“You’re starting to see corporate travel snap back, and TripActions is well positioned to capture the opportunity,” Gil wrote via email. “And, new add-on businesses like Liquid are scaling nicely.”

In general, he believes the startup offers “lots of great features to make the travel experience much better, including clever features around COVID-related trip planning.”