Cord, a startup that offers a single API to add Slack-like collaboration features to any app, has bagged $17.5 million in Series A funding.

The round — which is pegged to fund product development, including by hiring engineers, designers and product managers — was led by European VC Index. Other investors participating include NFX and Stride, along with angel investors Elad Gil, Jeff Morris Jr., Charlie Songhurst, Guy Podjarny and Matt Robinson.

The London-based startup was only founded last year. It’s not disclosing customers’ numbers yet but has today revealed a partnership with the “conversational data collection” platform Typeform — which is using Cord’s API to offer its customers the ability to collaborate as they design online forms.

Cord says a private beta it was running, which ended in August when it opened up for general access, has involved “hundreds” of clients — including other undisclosed SaaS makers, startups and scale-ups.

“Our best markets are really B2B SaaS that’s used by teams, so we see everything from people using it in CRMs like HubSpot, CMSs like Webflow or WordPress, marketing tools like Mailchimp, BI tools like Amplitude, no-code tools like Retool and everywhere else you work with other people you need approval, or help, or feedback from,” the startup tells TechCrunch.

“Right now it’s more heavily taken up by teams that are from early-stage startups to scale up, we do see use amongst Typeform’s enterprise clients so some very big multibillion-dollar tech companies and consumer brands that are Typeform users or a big motion picture studio who uses Cord in their BI tools.”

Cord’s API — which it touts as a single line of JavaScript — enables paying customers to quickly add a range of collaborative features to their own products, taking the strain out of developing social add-ons like real-time chat, presence, annotations, integrations with task managers and Slack, screen recordings, audio messages, live co-browsing and video chat. 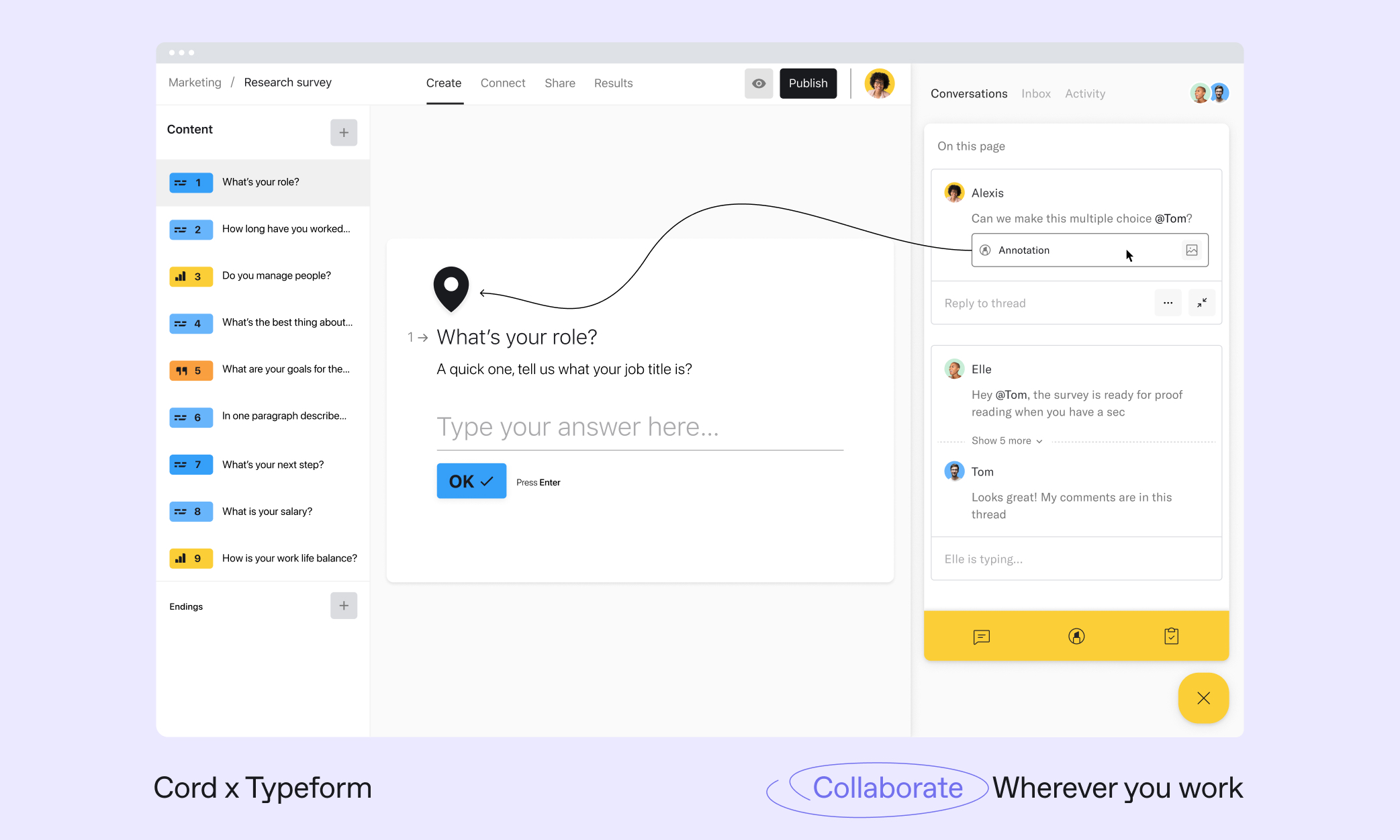 Information workers of the world who already find themselves struggling to stay on top of all the channels they need to check for Slack-style notifications, pings and other digital chatter should prepare for this kind of social noise to get exponentially worse; essentially it could end up like omnipresent background radiation — spread across every piece of business software.

Commenting on Cord’s raise in a statement, Jan Hammer, partner at Index Ventures, predicted resistance to this trend will nonetheless be futile.

“The growth of remote working, combined with a proliferation of software-as-a-service tools, means that teams lose time moving back and forth between productivity and communications applications, such as Slack. Cord allows users to stay within the app that best supports their workflow but still get the benefits of collaboration,” he suggested. “We like that Cord adds to existing apps – it’s not yet another solution customers will have to adopt, it’s a solution inside what they’re already used to. Eventually, we believe SaaS tools will ship with Cord straight out of the box.”

Cord’s pitch is that its API saves companies “years” of development time by making it super simple for them to add a social dimension — and thereby steal a competitive march on more siloed peers.

“Most web products will become a multiplayer experience in the coming years,” suggests Nimrod Priell, Cord’s CEO and co-founder, in a statement. “We already see it happening: Figma reached 4 million users in 4 years and decimated Adobe, Invision and Sketch to become the dominant prototyping design app — in major part thanks to its built-in collaboration.

Priell is a former Facebook product manager. While another Cord co-founder, Jackson Gabbard, who is also its CTO, was an early Facebook engineer who worked on some formative features of its platform and an internal suite of tools used by tens of thousands of Facebook employees.

On the competitive front, Cord is not the only startup trying to sell other companies an easy route to adding real-time collaborative features — it points to roomservice.dev as another team building similar APIs, for example.

There are other startup too, such as Liveblocks — or, at the lower level of the collaboration pipe, Ably.

While Google has been offering an API for devs to add Google Docs-style collaboration to their own apps for the best part of a decade.

But Cord also argues its main competition is internal dev efforts to build collaboration tools in-house — making a SaaS-style pitch to other businesses not to bother investing precious time and money away from their “core experience and mission”, and instead outsource the building of a “high quality communication experience”, which integrates with core services like Slack and Teams and is kept up to date by a dedicated team of API builders, to yet another third-party provider.