The Ford F-series pickup is America’s truck. At least, that’s what the numbers tell us.

It’s been America’s top-selling vehicle for close to half a century. While the Chevrolet Silverado and Ram’s series of pickups are worthy competitors, Ford still sells tens of thousands more units than either one.

If you spend any time with one, you might recognize the appeal. The large, powerful truck can function as both a mobile office and workbench; it can tackle just about any job as well as most terrains. And yet, Ford recognizes this all-in-one utility vehicle isn’t for everyone.

For the detractors, the F-series is too large, cumbersome and wasteful. It may even come off as a little obnoxious. Ford needed a truck for those dead set against Ford’s No. 1 seller — a vehicle that would go against the norm and stray from the typical expectations of what a pickup can and should be.

The Maverick is Ford’s return to the North American compact pickup truck market after abandoning it for the better part of a decade. Its previous model, the Ranger, has recently returned with an upgrade to a midsize truck, while the all-new Maverick picks up (heh) where it left off. Fittingly, the “Maverick” nameplate was first used by Ford in the 1970s for a series of compact sedans. 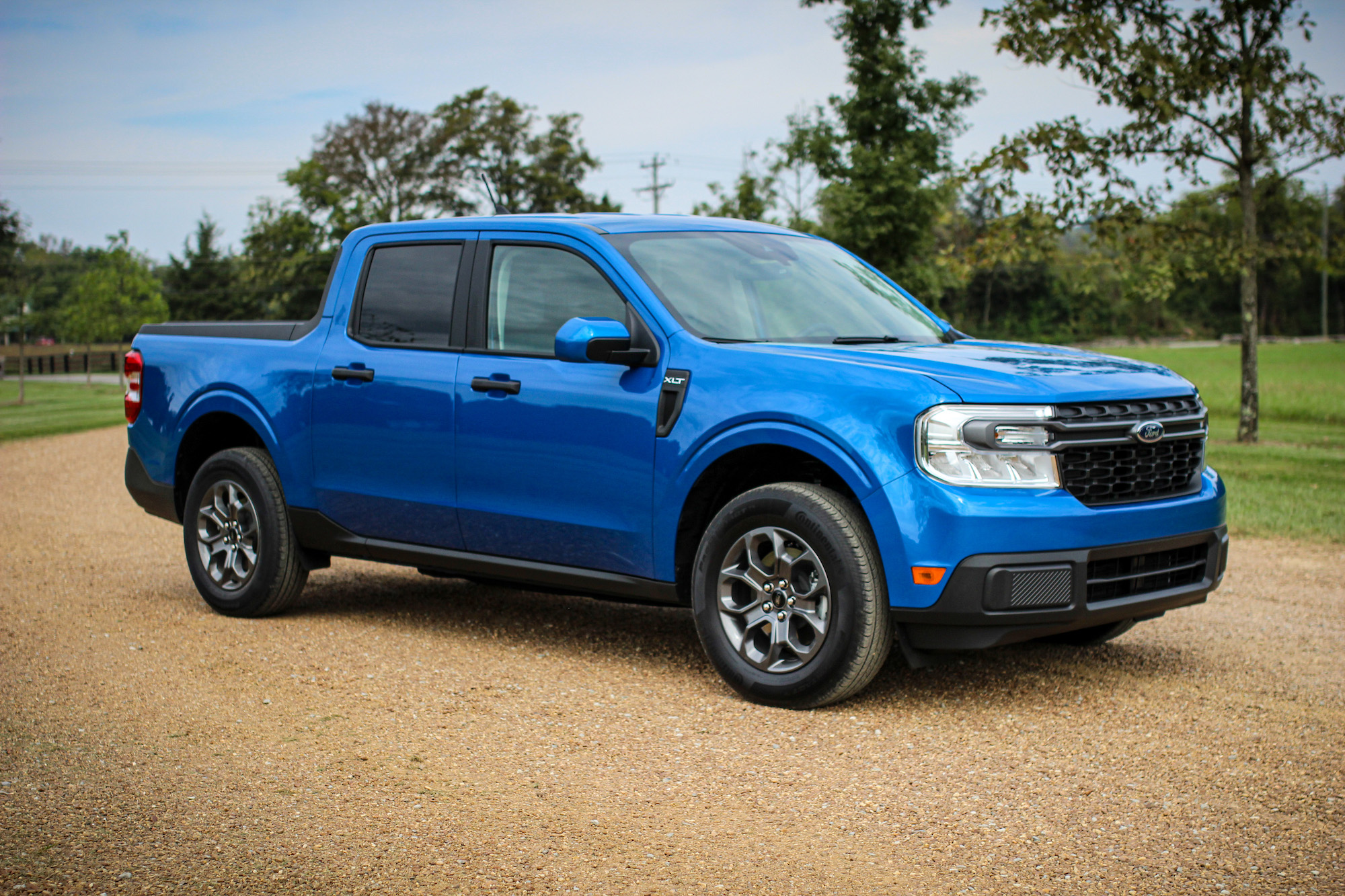 This all-new truck is a unibody construction with one configuration on offer, a four-door “SuperCrew” cabin that seats five and a truck bed that’s about 54.4 inches or just a smidge over 4.5 feet long. For comparison, that’s half a foot shorter than the Ranger box with a SuperCrew cab.

The Maverick, which TechCrunch had an opportunity to test, comes standard with a hybridized 2.5-liter four cylinder engine that produces 191 horsepower and 155 pound-feet of torque. It’s married to a continuously variable transmission and sends power to the front wheels.

In this standard configuration, the tiny truck is meant to deliver big on fuel economy, with an estimated 40 mpg of city miles and 500 miles of range on a single tank. It’s capable of carrying 1,500 pounds of cargo and towing 2,000 pounds of whatever you want behind it.

Anyone seeking a bit more grunt can upgrade to an optional 2.0-liter EcoBoost engine that provides 250 horsepower and 277 pound-feet of torque. This engine is linked to a more traditional 8-speed automatic gearbox and can drive either the front or all four wheels. In terms of capability, its payload numbers stay the same but it tows 2,000 pounds of cargo on its own, or twice that amount with the optional 4K Tow Package (AWD-models only).

An EcoBoost-powered Maverick with AWD is eligible for the FX4 package, which adds underbody protection for off-road activities, as well as adjustments to the suspension tuning and additional, off-road focused drive modes.

The XL, XLT and Lariat trim levels are familiar Ford family fare. On the Maverick, the XL and XLT don’t differ drastically, with the latter simply unlocking a handful of neat accessories. Both have cloth seats and come with whichever powertrain configuration appeals to you.

The Lariat trim has a few more bells and whistles, along with an “activeX” synthetic material to give the cabin a slightly more premium feel. In its base hybrid configuration, the Maverick’s starting price is below $20,000, with the rest of the trims being in the $20,000 to $30,000 range. Fully loaded, the Maverick’s bottom line maxes out in the $35,500 range. 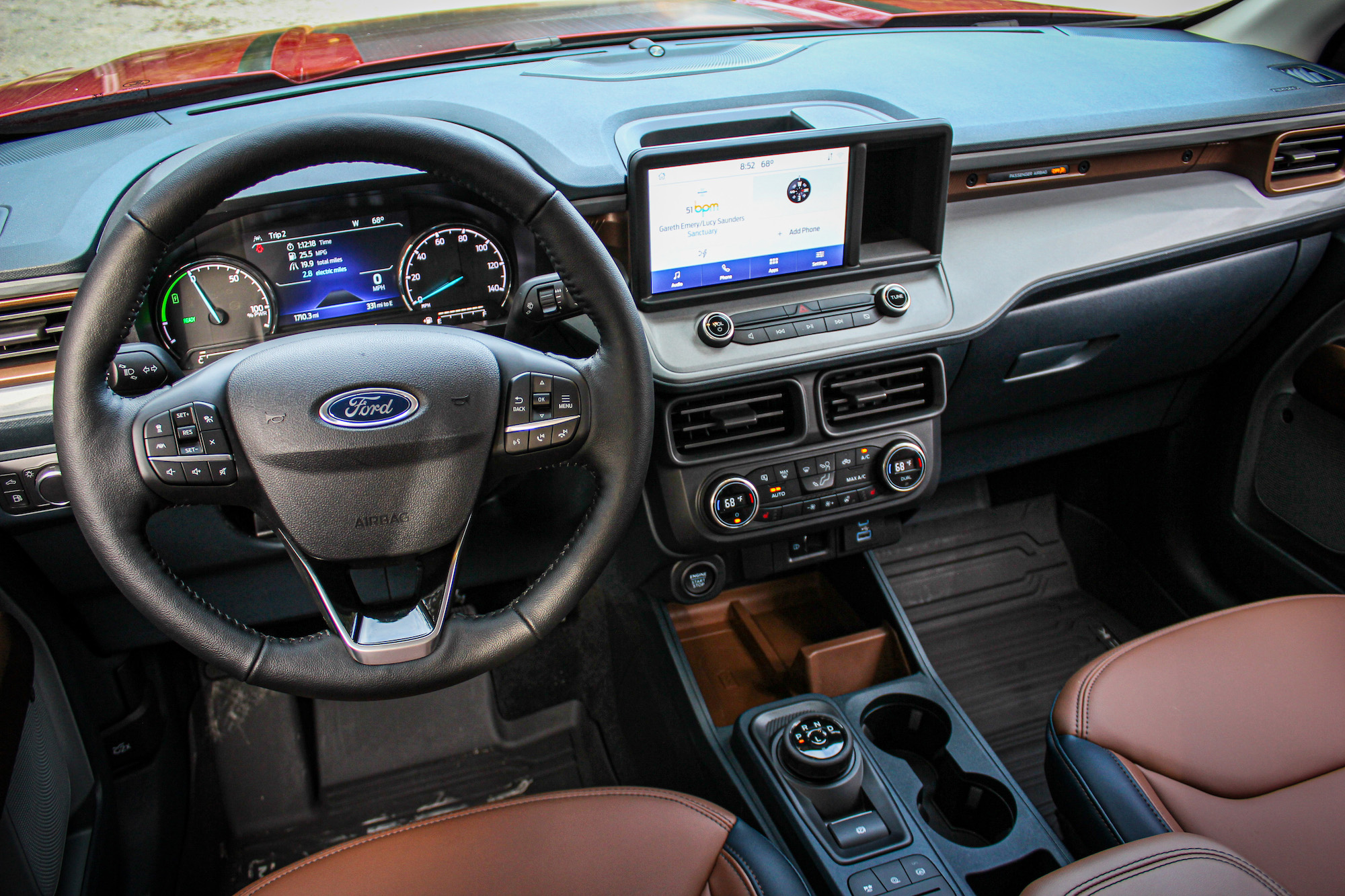 Like its larger siblings, the compact truck is fitted with most modern safety and convenience technologies, though the more impressive stuff is largely optional. Automatic emergency braking with pedestrian detection and collision warning is standard, but drivers who want adaptive cruise control, lane-keep assist or even hill descent control, plus a handful of other helpful driving aids will have to add them on as part of an extra technology package.

Inside the cabin, passengers will be treated to an 8-inch touchscreen that’s Apple CarPlay and Android Auto compatible. A built-in WiFi hotspot gives up to 10 devices internet access through FordPass Connect, which has a three-month free trial before a subscription is required.

Other FordPass conveniences, however, are complementary, such as access to the car via a smartphone app. From here, drivers can connect to their car remotely for starting it up, unlocking the doors and vehicle status updates.

The Maverick’s true party trick is its “Flexbed,” a standard truck bed constructed to meet a multitude of different needs. It does this with a few nuanced tweaks like having a multiposition tailgate, an incorporated storage cubby, slots for false load floors and several attachment points to tie down rear cargo.

Flexibility is the name of the game for Maverick as a whole, as every aspect of the car was designed to maximize utility throughout. For instance, the unibody construction allowed for the fuel tank to be shifted to the back enough to allow for a substantial amount of storage underneath the rear seats. Doors were designed with the now-popular multiuse drinking bottles in mind and every free cavity of space has been converted into some sort of storage function.

The DIY spirit of Ford’s truck owners was top of mind when it came to designing the Maverick.

After observing the unique solutions users came up with to get the most out of their truck, Maverick was laid out to make things easier, saving customers having to hack into tail lamps for wiring solutions or drill into the truck bed for mounting brackets. QR codes throughout the Maverick will lead handy Maverick owners to a site filled with several video how-tos, plus CAD files of certain components will eventually be uploaded to allow 3D printers to come up with their own accessories.

Anyone turned off by the driving characteristics of larger trucks like the F-150 would find the Maverick refreshingly approachable. By design, its half-car/half-truck nature keeps it from driving like its body-on-frame siblings and feels more like a subcompact car with a raised seating position. The unibody construction feels solid on its suspension, and the body roll one would expect to feel in a ponderous pickup simply isn’t there. It’s no sports car, but the ride is competent, and fun roads don’t feel wholly wasted on this truck.

The front-wheel drive hybrid pulls well in either normal or sport mode, the latter of which is there for those who might seek a touch more throttle response from the efficiency-oriented Atkinson-cycle engine. It pairs well with the CVT transmission, which is largely unremarkable, but in a positive way. This could actually be the best way to sum up the hybrid Maverick’s driving experience — inoffensive. As a daily driver, the Maverick simply does its job and doesn’t disappoint but it’s also not particularly exceptional in that department, which, in a way, is a win in terms of nailing expectations.

It performed well enough that I was never longing for the extra power that the EcoBoost-fitted Maverick provided, which was confirmed when I switched vehicles. Having a bit of extra power on hand is nice, but it didn’t change the dynamics on the road so drastically that I would be compelled to choose it over the hybrid. Off road, it would be a different, if slightly more complicated story.

Go-anywhere adventurers should seek the Bronco. Even casual overlanders would be better served by the Bronco Sport. Even though it and the Maverick share the same platform, the shorter wheelbase and clearance alone puts it ahead of the compact truck.

In practice, the added drive modes to control throttle and wheel slip, paired with more capable tires served the Maverick well for the off-road portion of the test drive. The terrain was a mix of flat gravel and well-trodden paths through grassy country land. None of it was particularly challenging save for a very boney hill climb made up of large loose rocks.

The Maverick had no issues surmounting the rough stuff, and though the path itself would be considered light by experienced off-roaders, it was certainly rocky enough to give anyone a moment of pause, particularly if they were in a car they weren’t confident in.

There was little doubt the AWD EcoBoost version of the Maverick would be able to tackle a few light obstacles. The hybrid was another story. For now, Ford isn’t offering the hybrid as an AWD. And I wasn’t able to put the front-wheel version through off-road portion of the drive.

Mechanically speaking, the mild hybrid system is fairly low impact. In broad terms, it’s a small motor integrated into the drivetrain partnered with a small battery for some light power recovery, as opposed to multimotored PHEVs laden with massive power packs. It seems there’s little preventing the hybrid Maverick from getting its own AWD setup. Would it be less capable than the EcoBoost off road and hurt the MPG numbers? Most certainly, though the drop-off would presumably be within a very reasonable margin.

Let’s look at the mpg for an example. Ford is very pleased to state that the hybrid FWD Maverick is capable of 40 mpg. The heavier and more power demanding AWD system would very likely reduce that return, but to what? 30 mpg? 25? It’s not 40, but for a compact truck, that would still be pretty good.

As for off-road prowess, the most rugged Maverick is still by Ford’s own admission limited, and while 277 pound-feet of torque — the number that matters most in off-roading — is undoubtedly better than 150 pound-feet, it’s not nothing, and certainly enough given the parameters the Maverick can work within.

There’s no question the FX4-fitted EcoBoost AWD Maverick is better at such things, but given that the hybrid system is standard and the most appealing, it stands to reason this is the version of the Maverick that will sell the most, and thus the one drivers will want to take off the tarmac — or at least try.

Ford has designed the Maverick to appeal more to car upgraders than truck downgraders, meaning that while there might be some overlap in terms of customers between it and the midsize Ranger, they’re not strictly at odds with each other.

Meant for more urban and suburban settings, the Maverick’s closest rival pickup would be the Honda Ridgeline. It’s proven track record as an urbane, car-like midsize truck is currently unmatched, though the Maverick and all-new Hyundai Santa Cruz could shake its solid footing.

The Ford Maverick is an intriguing “blank slate” of a vehicle sold more on its potential rather than what it actually is.

On its own, it’s either a cost-effective, fuel-efficient compact utility vehicle or a modestly capable off-roader. It will surely catch the eye of buyers looking for the utility of a truck without the premium price and spatial demands, the same way those seeking a dog for companionship might opt for a terrier rather than a Saint Bernard.

Its car-like handling makes it accessible for new drivers as well as anyone put off by piloting hefty SUVs or full-sized pickups. What the Ford Maverick is, is “just fine,” but what it can be, is limitless.