Honda R&D Co., Honda Motor Company’s (HMC) innovations arm, will be leading the effort on “outside-the-box research on technologies that will bring about new value for people by expanding the potential of mobility into the third dimension, then the fourth dimension, which defies the constraints of time and space, and ultimately into outer space,” according to the company.

It sounds like the stuff of a sci-fi novel, and indeed some of these innovations might not end up panning out in the end, but during Thursday’s briefing, the company demonstrated how its core technologies developed over the past 73 years — like combustion, electrification, control and robotics — could evolve to suit the purpose of a future world with vastly different mobility needs.

The difference between an eVTOL and a helicopter is mainly that the former has multiple propellers, each of which have an independent motor driven by electricity from a battery, whereas the latter has one large, and loud, rotor at the top. As a result, eVTOLs are generally expected to be safer, quieter and cleaner.

While most of the eVTOLs being developed around the world are all-electric, HMC aims to “leverage its electrification technologies and develop a Honda eVTOL equipped with a gas turbine hybrid power unit,” according to a statement from the company. The company first announced its intentions to develop technologies in this space during a press conference in April, in which HMC also stated its goals to sell 100% EVs by 2050.

Marcos Frommer, manager of corporate communications at HMC, explained during the press briefing that all-electric eVTOLs have a very short range due to the battery capacity per mass, which means most use cases for these new vehicles will be limited to short-distance flights, such as intercity transportation and shuttle flights. Even Joby Aviation, which recently announced plans to commercialize by 2024, only recently completed the longest test flight of an eVTOL to date, and that was about 150 miles on a single charge.

“According to the results of our market research, the largest demand for mobility by eVTOL aircraft is for longer distances such as intercity transportation with a range up to 250 miles,” said Frommer. “Due partly to the electrification of our automobiles Honda is putting its effort in research and development of lithium-ion batteries. However, advancement based on the current lithium-ion battery is expected to increase the energy density per capacity by only about several times in the next 20 years. So we believe that for mobility in the skies, which requires further weight reduction, it’s difficult to achieve long distance using batteries only.”

Frommer said if batteries advance more in the future, HMC can choose to make its eVTOLs all-electric by removing the gas turbine generator. 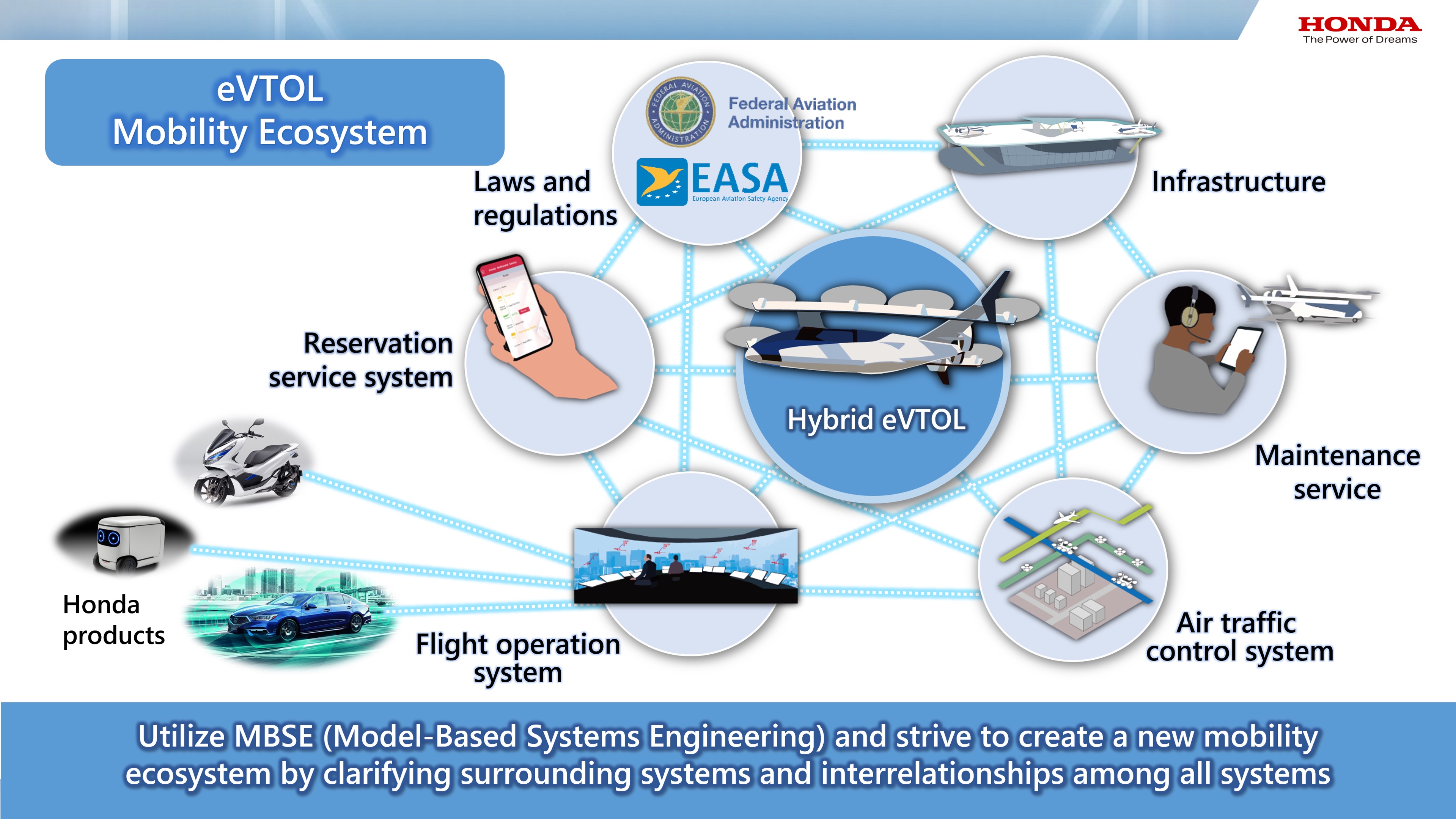 The company says it wants to create a new “mobility ecosystem” that features eVTOLs at its core and is connected to mobility products on the ground. Per the animated example HMC showed during the briefing, a business executive living in Cape Cod might be able to use a single app to book a hybrid eVTOL to take them to their office in New York City, which would be a mere two-hour commute by air. The app might be connected to their personal autonomous Honda vehicle, which would chat about the weather as it drove to a mobility hub for takeoff. When they landed, an autonomous shuttle would be there waiting in the Big Apple to take them to their office. After a day of easy commuting, they’d be home in time for dinner on the veranda with the family.

“By utilizing the model-based systems engineering, or MBSE, method, this will be a challenge Honda will take on to transform ourselves from a conventional manufacturing company to a new company that will also design and commercialize systems and services,” said Frommer. “We will be able to deliver new value to our customers only when we complete one big system consisting of various elements, including a reservation system infrastructure, air traffic control, flight operation and existing mobility products such as automobiles. It’s impossible for Honda to handle all of these elements alone and we will need to collaborate with many companies and government agencies.”

HMC plans to conduct technology verification with prototypes in 2023 and conduct flight tests of a hybrid demonstration model in 2025. It will then make a decision on commercialization. If HMC decides to move forward, it hopes to obtain certifications by 2030 so it can launch in the following decade. The company told TechCrunch if it reaches commercialization, customers can expect prices for eVTOLs, which can more than seat four passengers at a time, to be lower than business class on commercial passenger planes.

“Details about possible commercialization are still being discussed. However, we are striving to enable all customers to use our eVTOL aircraft at prices lower than the prices of flying business class on a commercial passenger plane,” Frommer said. HMC expects eVTOL to be the norm by 2040 and has forecasted a market size of about $269 billion by then.

Transcend time and space with the Honda Asimo robot 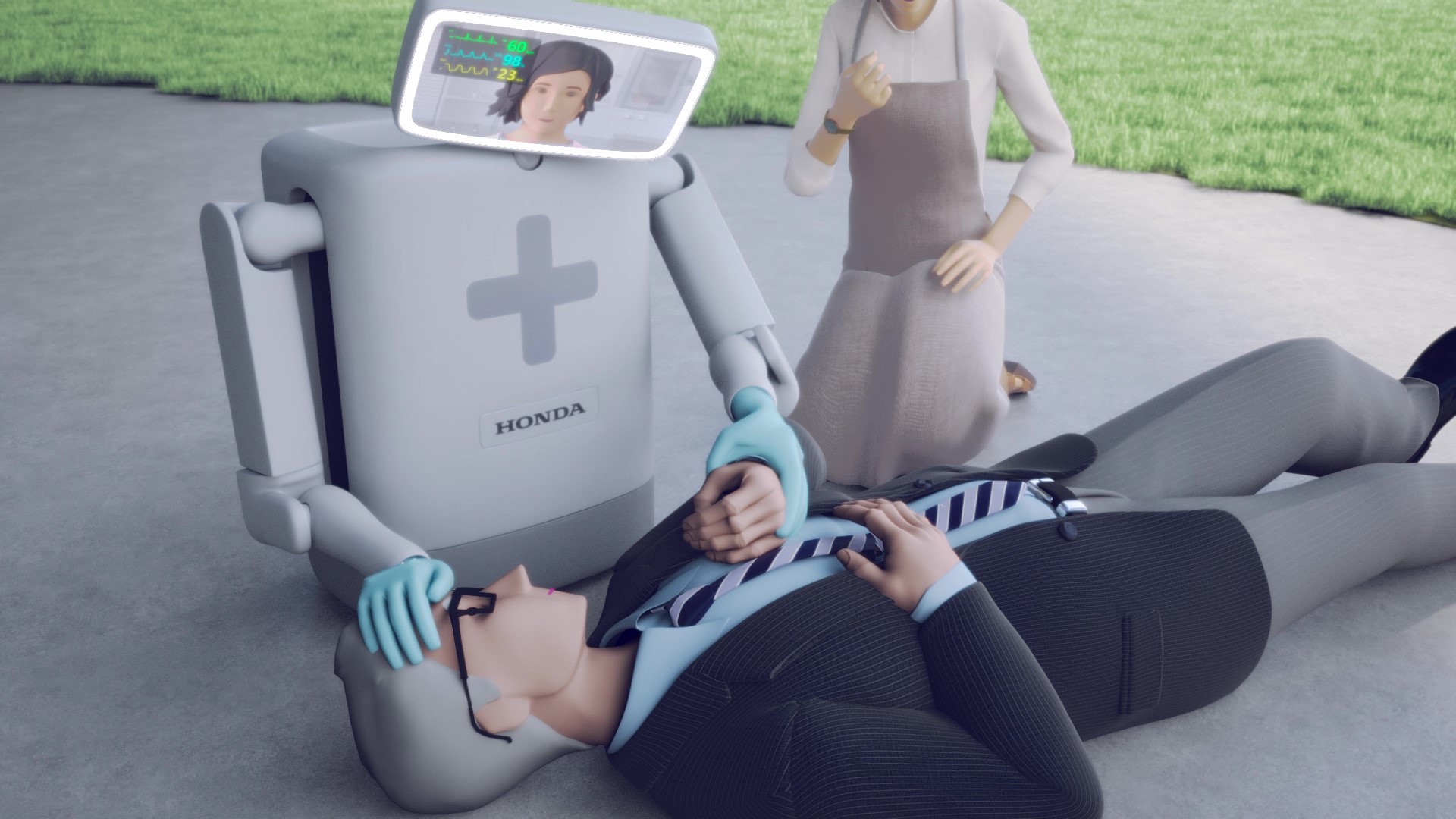 Honda’s avatar robot concept, Asimo, would allow the user to have a second self that performs tasks and experiences things without being there in person. Users connect and remotely control the avatar by wearing a VR headset and a tactile glove that will ultimately be able to mirror precise hand movements.

“We position this as four-dimensional mobility, which transcends time and space going beyond 2D and 3D mobility,” said Frommer.

The company envisions Asimo robots being used for applications like remote surgery, which will likely be very popular in developing nations that don’t have access to world-class surgeons, or space exploration, enabling an avatar version of a person to go to places that are uninhabitable or difficult to reach by humans.

“What will become the core of the realization of such an avatar robot is the multifingered robotic hand developed while leveraging Honda’s strengths in robotics technologies and Honda’s original AI-supported remote control function,” according to the company. “Therefore, Honda strived for an avatar robot that is capable of using its multifingered hand to make full use of tools designed for human use and performs complex tasks quickly and accurately based on the AI-supported and more intuitive control by the user.”

Toyota also has a similar bipedal avatar robot controlled by telepresence called the T-HR3, and Tesla recently unveiled its plans for a humanoid robot, although the Tesla bot doesn’t appear to be based on remote controlled technology. If Honda goes through with its plans for Asimo, it stands to reason that it would use teleoperation both for easier manipulation and robotic learning. Showing a robot how to do something could just be the best way to train it.

Honda says it wants to put Asimo into practical use in the 2030s and is hoping to conduct testing before the end of the fiscal year ending March 31, 2024. 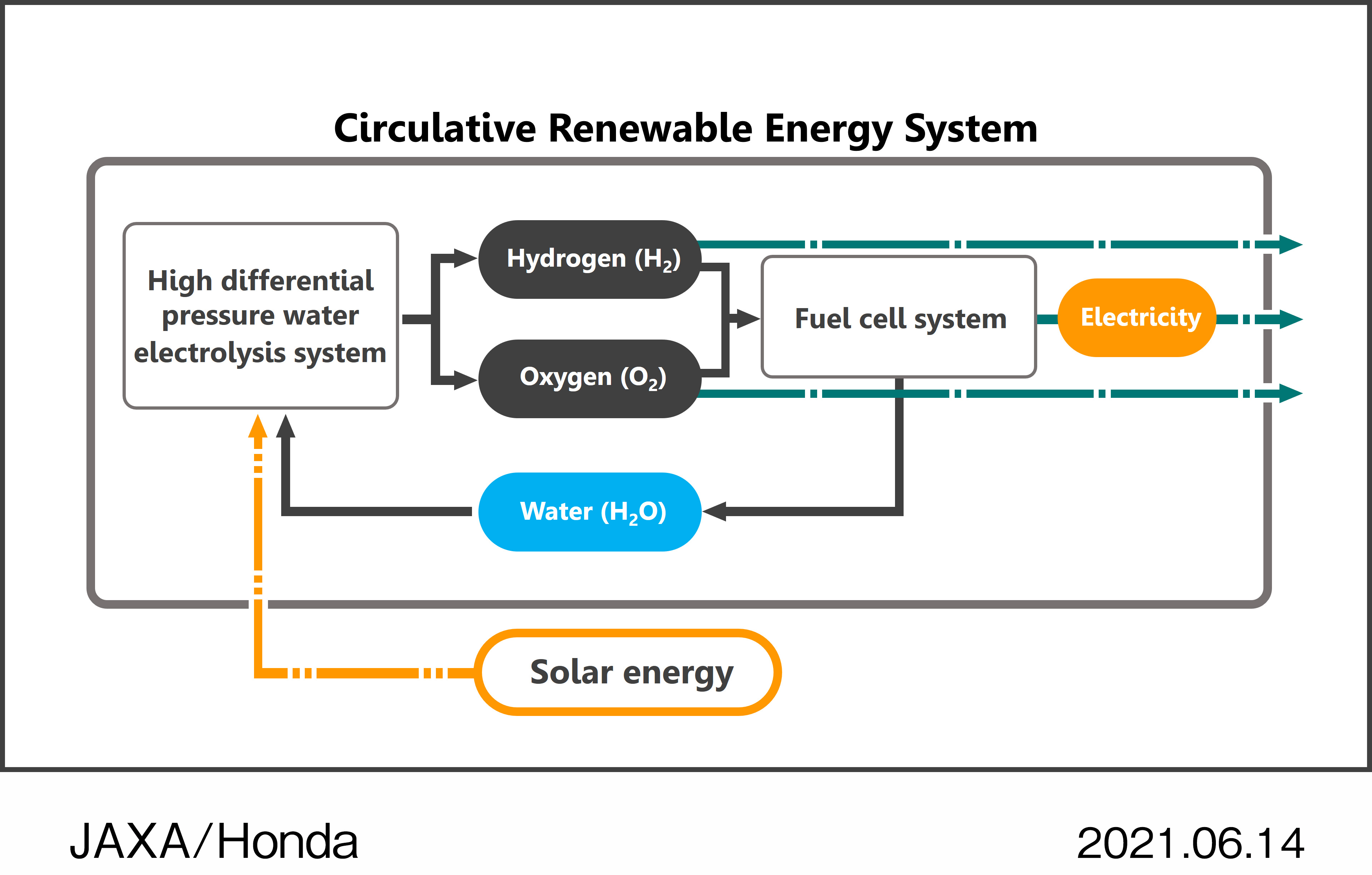 Honda also announced plans to accelerate R&D in the field of space technology, specifically in lunar development. One theme Honda touched on briefly was its previously announced circulative renewable energy system. In June, Honda R&D Co. and the Japan Aerospace Exploration Agency announced a joint feasibility study on the system, which is designed to supply oxygen, hydrogen and electricity for human outposts and rovers on the moon so that people can live in space over an extended period of time. The system would leverage Honda’s existing fuel cell technologies and high differential pressure water electrolysis technologies, according to the company.

Honda also discussed using remote-controlled robots on the lunar surface to minimize the risks associated with astronauts being blasted into space and to even allow people to virtually explore the moon from Earth. The moon robot would include the same multifingered hand technology and AI-supported remote control technology that’s being developed for the avatar robot, as well as torque control technology that Honda uses for collision mitigation.

The automaker also hopes to use its core technologies in fluid and combustion as well as guidance and control to build reusable rockets.

“If we can use such rockets to launch small low-orbit satellites, we can expect to evolve our core technologies into various services, including connected services,” said Frommer. “All such services will be compatible with Honda technology.”

Frommer said Honda gave its “young engineers” with dreams of building a rocket the go ahead at the end of 2019 to begin R&D. Honda did not provide any further specifics about either of its space initiatives.