Today, Stark launched a private beta for its Stark for Mac app, which streamlines accessibility compliance to make products more inclusive while allowing everyone involved in a project to easily collaborate. Companies can upload their design files into Stark’s tool, which then identifies accessibility issues and suggests changes.

Stark started in 2017 when Cat Noone and her team realized that there wasn’t an easy solution for designers to make sure their creations were accessible and inclusive. Now, more than 500,000 people have used Stark’s integrated plug-ins for apps like Adobe XD, Figma, Sketch and Google Chrome, which offer checks and suggestions to make sure that visual materials meet accessibility standards for visually impaired people.

“We started with the plugins, and they’re still a great way of creating awareness by surfacing issues that are happening in your product,” Noone told TechCrunch. “But they don’t solve accessibility issues for you in a way that scales, or in a way that ensures everyone is involved in the product.”

But Noone says that the Stark for Mac app will “supercharge accessibility” by making it even easier to address sweeping problems across swaths of design files. For example, if an app like Twitter were to change its font (which it recently did, sparking conversation about the need for customization in accessible design), the designers would have to arduously change the typeface on hundreds of different screens within the app. But Stark makes that process much faster. 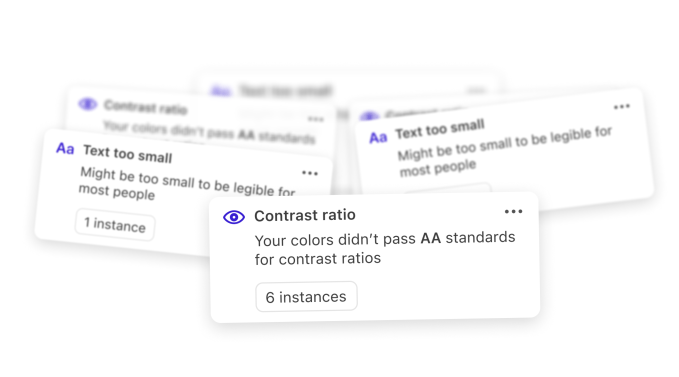 “What Stark does is, for any instance that the issue occurs, it allows you to take that suggested change, open up the design file, make the change, and go ahead and sync it,” Noone said. “So at that point, you have not just this one individual screen, but you have your entire design system, every screen where this instance shows up rectified. That’s massive, because it takes your design development time and completely squashes it, and our goal is to decrease your time to compliance, all the while educating you about why this was rectified.”

Noone has been saying since last year, when Stark raised $1.5 million in seed funding, that the product can be the Grammarly of accessible design, functioning on both a consumer and enterprise level. Though the company isn’t yet profitable, some of Stark’s existing customers include Microsoft, Pfizer, Instagram and ESPN. Plus, Stark hosts a Slack community for people interested in accessible design, as well as a public library of accessibility resources that Noone says is the largest on the internet. Stark has a limited free plan that allows users to try out the product and join its Slack, but access to its existing suite of tools costs $60 per year. Teams can request a quote for a custom plan, which adds access to unified billing and multi-team management. 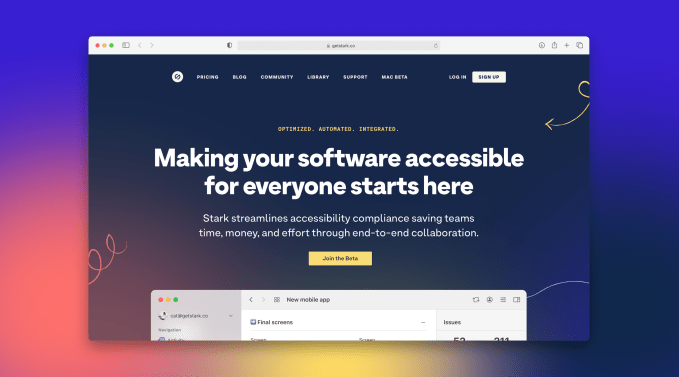 Accessibility is crucial for tech companies, because if their products aren’t usable by people with certain disabilities, then they’re missing out on a massive customer base. But, if being inclusive isn’t a good enough motivator (sigh), then money is.

“Especially in recent events, the pandemic pushed so many businesses to increase their digital presence. We reached a point where tech companies that don’t make their products accessible to all possible users are excluded from the market, and they miss out on this windfall,” Noone said. But Stark makes it easier to retrofit years of old design files to be compliant with accessibility standards. “The Stark for Mac app ensures that you no longer need to employ these 10 or 20 consultants, because the individuals that are building the product are educated, and the tools sit with them.”

For now, the private beta version of the Stark for Mac app will work with Sketch, but Noone says the app will quickly roll out compatibility with other popular design tools like Figma and Adobe XD. Then, it will allow users to assign tasks to others within the app by integrating with project management tools. People who want to try the private beta can contact Stark for access on its website. The beta will be free, but once it launches publicly, Stark will announce a pricing plan.

“We’ve had the luxury of building this alongside a very vocal community,” Noone said. “Granted, we’re rolling out into private beta, but it’s still very much beneficial for engineers and designers.”

“We have a team from all around the world, with so many languages, so many skin colors, so many orientations — just the way we view ourselves and the way we navigate the world is inclusion in itself, which I think is pretty magical,” Noone said. She wants Stark to be able to adapt to emerging technologies like VR and AR, while also addressing that accessibility looks different across cultures — what makes a typeface legible in English, for example, may not necessarily hold true for writing in Arabic or Thai. “We are a reflection of the product we built, and I think that makes it ridiculously easy to put our money where our mouth is, because it’s something we as a collective live every day.”