A 22-month-old startup that is helping millions of blue- and gray-collar workers in India learn new skills and find jobs has become the youngest firm to join the coveted unicorn status in the world’s second-largest internet market.

Apna announced on Thursday that it has raised $100 million in a round led by Tiger Global. The new round — a Series C — valued Apna at $1.1 billion. TechCrunch reported last month that Tiger Global, an existing investor in Apna, was in talks to lead a $100 million financing round in the startup at the unicorn valuation.

Owl Ventures, Insight Partners, Sequoia Capital India, Maverick Ventures and GSV Ventures also participated in the new round, which is the third investment secured by Apna this year. Apna was valued at $570 million in its Series B round in June this year.

The investors’ excitement comes as Apna has demonstrated an impressive growth in recent months. The startup has amassed over 16 million users on its 15-month-old eponymous Android app, up from 10 million in June this year.

Indian cities are home to hundreds of millions of low-skilled workers who hail from villages in search of work. Many of them have lost their jobs amid the coronavirus pandemic that has slowed several economic activities in the South Asian market.

Apna has built a platform that provides a community to these workers. In the community, they engage with each other, exchange notes to perform better at interviews and share tips to negotiate better compensation. 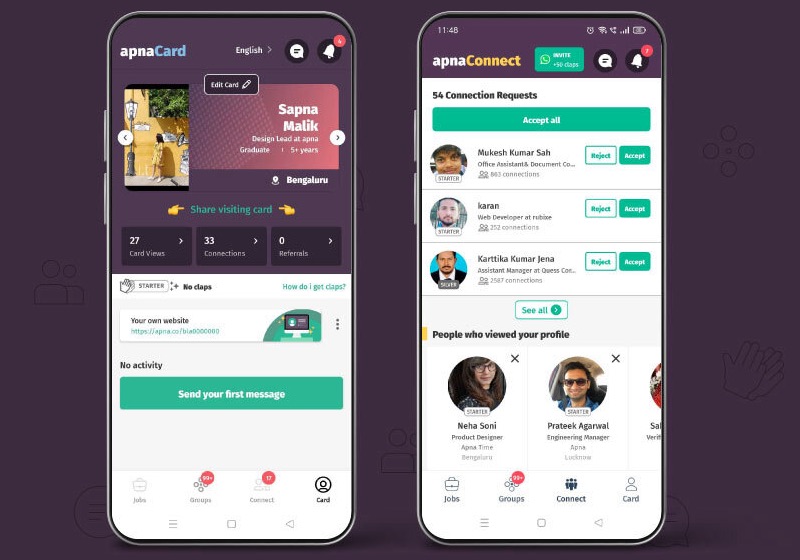 On top of this, Apna connects these workers to potential employers. In an interview with TechCrunch, Apna founder and chief executive Nirmit Parikh said more than 150,000 employers — including Zomato, Bharti AXA, Urban Company, BYJU’S, PhonePe, Burger King, Delhivery, Teamlease and G4S Global — are on the platform, and over 5 million jobs are active.

The startup, whose name is inspired from a cheerful 2019 Bollywood song, has facilitated over 18 million job interviews in the past 30 days, he said. Apna is currently operational in 28 Indian cities.

The idea for Apna came, Parikh has said, after he was puzzled to find that even as there are hundreds of millions of blue- and gray-collar workers in India, locating them when you need assistance with a task often proves very difficult.

Prior to starting Apna, Parikh, who previously worked at Apple, met these workers and went undercover as an electrician and floor manager to understand the problems they were facing. The problem, he found, was the disconnect. Workers had no means to find who needed them for jobs, and they were also not connected with one another. The community aspect of Apna, which now has over 70 such groups, is aimed at addressing this challenge.

The Apna app allows these workers to learn new skills to become eligible for more work opportunities. Apna has emerged as one of the fastest growing upskilling platforms — and that would explain why GSV Ventures and Owl Ventures, two high-profile firms known to back edtech startups, are investing in the Bangalore-based firm.

“Apna’s viral adoption is driven by a novel social and interactive approach to connecting employers with job seekers. We expect job seekers in search of meaningful connections and vetted opportunities to drive Apna’s continued explosive growth across India — and the world,” said Griffin Schroeder, partner at Tiger Global, in a statement.

Now the startup, which has started to monetize the platform, is ready to aggressively expand. Parikh said Apna will continue to expand to more cities in India and by early next year, Apna will begin its global expansion. Parikh said the startup is eyeing expansion in the USA, South East Asia and Middle East and Africa.

“We have already created a dent. Now we want to impact the lives of 2.3 billion,” he said. “We will require crazy amounts of resources and a world-class team to deliver. It’s a herculean task, and is going to take a village. But somebody has to solve it.”