Affinity wants to take what Ray Zhou, co-founder and CEO, refers to as “data exhaust,” all of those daily interactions and communications, and apply machine learning analysis and provide insights on who in the organization has the best chance of getting that initial meeting and closing the deal.

Affinity, based in San Francisco, is focused on industries like investment banking, private equity, venture capital, consulting and real estate, where Zhou told TechCrunch there aren’t customer relationship management systems or networking platforms that cater to the specific needs of the long-term relationship.

Stanford grads Zhou and co-founder Shubham Goel started the company after recognizing that while there was software for transactional relationships, there wasn’t a good option for the relationship journeys.

He cites data that show up to 90% of company profiles and contact information living in traditional CRM systems are incomplete or out of date. This comes as market researcher Gartner reported the global CRM software market grew 12.6% to $69 billion in 2020.

“It is almost bigger than sales,” Zhou said. “Our worldview is that relationships are the biggest industries in the world. Some would disagree, but relationships are an asset class, they are a currency that separates the winners from the losers.”

Instead, Affinity created “a new breed of CRM,”  Zhou said, that automates the inputting of that data constantly and adds information, like revenue, staff size and funding from proprietary data sources, to assign a score to a potential opportunity and increase the chances of closing a deal. 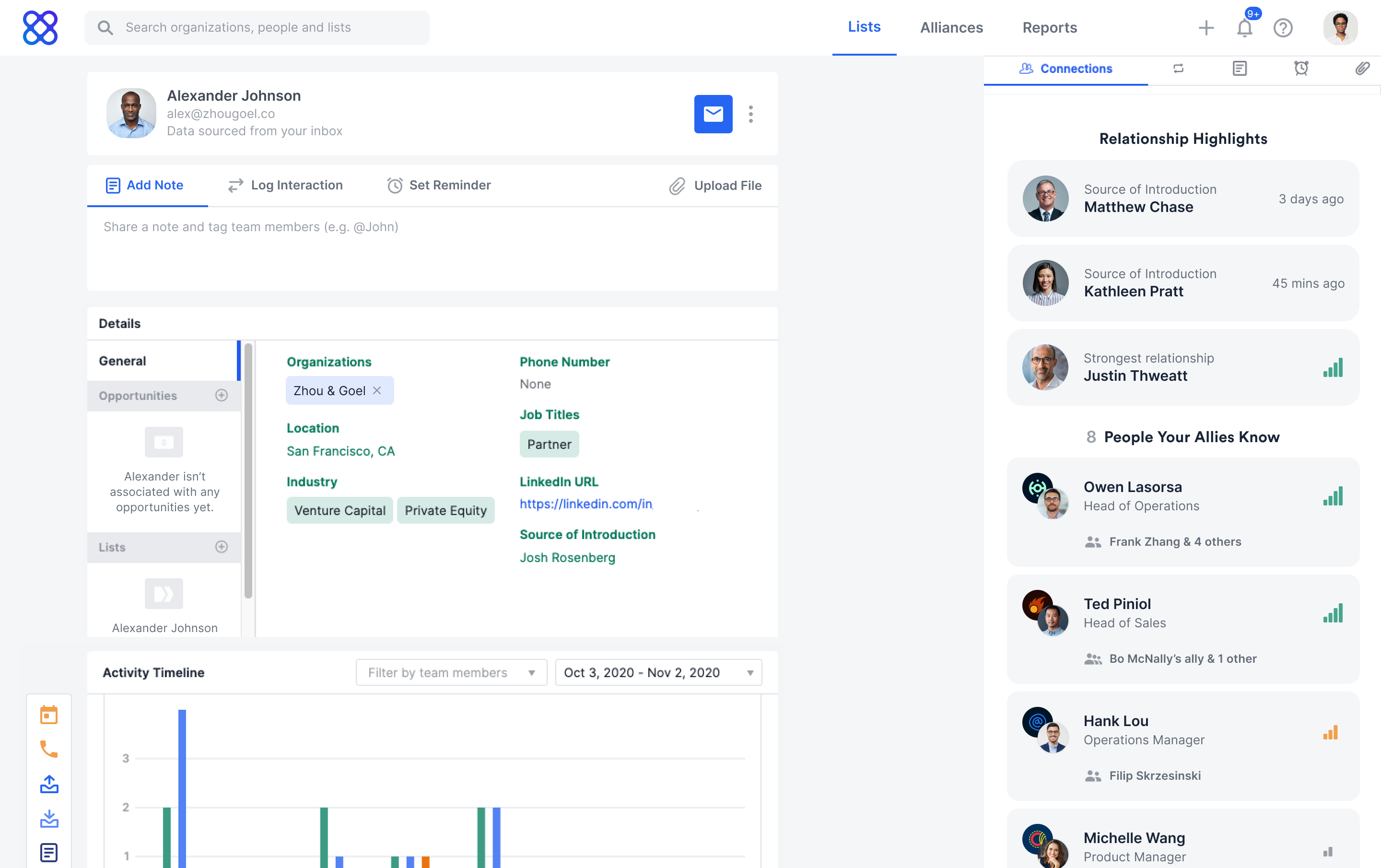 He intends to use the new funding to expand sales, marketing and engineering to support new products and customers. The company has 125 employees currently; Zhou expects to be over 200 by next year.

To date, the company’s platform has analyzed over 18 trillion emails and 213 million calendar events and currently drives over 500,000 new introductions and tracks 450,000 deals per month. It also has more than 1,700 customers in 70 countries, boasting a list that includes Bain Capital Ventures, Kleiner Perkins, SoftBank Group, Nike, Qualcomm and Twilio.

Tyler Sosin, partner at Menlo Ventures, said he met Zhou and Goel at a time when the firm was looking into CRM companies, but it wasn’t until years later that Affinity came up again when Menlo itself wanted to work with a more modern platform.

As a user of Affinity himself, Sosin said the platform gives him the data he cares about and “removes the manual drudgery of entry and friction in the process.” Affinity also built a product that was intuitive to navigate.

“We have always had an interest in getting CRMs to the next generation, and Affinity is defining itself in a new category of relationship intelligence and just crushing it in the private capital markets,” he said. “They are scaling at an impressive growth rate and solving a hard problem that we don’t see many other companies in the space doing.”