When it comes to contactless, automated supermarket shopping, Imagr is backing a vision-based approach. But unlike Amazon Go stores, which use cameras and sensors to monitor the shopper as they walk in and out without scanning or paying at checkout, this New Zealand-based company thinks the only images that should be captured and analyzed are those of products going into a shopping cart.

The early-stage startup has invented tech that attaches to the trolley and uses cameras to detect and label products, adding them to a virtual cart where shoppers can checkout without ever interacting with a human or waiting in a line.

The contactless shopping space has been growing slowly for years, but more recently it has seen a boost in the pandemic era, where the less we share air with another human, the better. The value of transactions processed by frictionless checkout technology is estimated to reach $387 billion by 2025, according to a 2020 study from Juniper Research.

“With COVID, I think what you probably saw was a huge rush on supermarkets that really exposed a number of things retailers weren’t prepared for,” Will Chomley, CEO and co-founder, told TechCrunch. “It also really highlighted the fact that the end user wanted a solution that was completely frictionless, and it demonstrated that their infrastructure was not capable of handling that sort of thing. But it also showed that as staff started to refuse to turn up to work because they didn’t want to catch it, retailers needed solutions to be able to run these stores on less staff.”

Amazon’s branded “Just Walk Out” technology is expanding internationally via its Amazon Fresh convenience stores, which can be found in the U.S. and the U.K. Chomley says this scares retailers who fear competition from the tech giant. At the same time, countries around the world are looking at going cashless, making this a ripe moment to focus on the frictionless checkout space.

Imagr, which recently had a pop-up shop in London to demonstrate its tech, is currently raising its Series A after it raised $9.5 million in seed funding at the end of November 2019 in a round led by Toshiba Tec. Chomley says Imagr has raised a total of $12.5 million to date, and as it raises its next round, is in the market for strategic partners rather than just VC money. The company says the tech is there, it just needs to scale.

The startup’s original smart shopping carts, complete with a halo on top that houses cameras and lights to detect products going in and out of the cart, can be seen in Japan’s 150 H2O Retailing stores, and the company says it has one contract due to go live this year in the U.K., as well as another two in the works and some other plans in Europe that can’t yet be confirmed publicly.

The haloed version of the shopping cart is not, however, the end product for Imagr. The plan is to roll out a more modular version by Q4, where instead of an entire cart, you get three pieces of hardware that attach to a standard cart. Each module will have its own set of lights and cameras, as well as a microprocessor where data is analyzed, then sent up into the cloud and back to the shopper’s app and virtual cart with less than one second latency. Chloe Lamb, brand and communications lead, says Imagr has built a prototype that’s currently for sale.

Lamb also said the modular method just makes more sense when scaling. Smart carts can cost retailers between $5,000 and $10,000 per unit and require a lot of maintenance compared to simple shopping carts, which tend to cost retailers less than $100 and will get beat up for years before being replaced. Amazon’s “Just Walk Out” tech is expected to cost retailers upwards of $1 million for installation and hardware, and that doesn’t include maintenance over time. Currently, the full system that it’s piloting is about $75,000 and includes 10 carts, an imaging station, a server station to run the system, full integration into a customer-facing store and Imagr support over the duration of the pilot. Imagr didn’t share how much its current model of trolleys cost versus its modular system, but says it’ll be a cheaper endeavor.

Shopic, an Israeli smart trolley company, also has a smaller piece of hardware that attaches to a cart and uses computer vision to detect products, but the difference is it includes a touchscreen display on the cart where you can see your constantly updated receipt. Shopic also uses the screen for an additional revenue stream in the form of advertising dollars, displaying ads based on the customer’s shopping history.

“They have the hardware, but we have the software,” said Lamb. “Our vision/AI is better. Like, we’ve cracked the hardest part of it and it’s the AI, and for us it’s been figuring out how we put that in a smaller vessel.”

Shopic and Amazon aren’t the only other hopefuls in this space. Standard Cognition has copied Amazon’s style of walk-out tech to distribute to stores. Earlier this year, the San Francisco-based company, which is now valued at $1 billion, raised $150 million in a Series C and announced a partnership with Circle K, the convenience store chain owned by Alimentation Couche-Tard Inc.

Aside from being kind of creepy — the all-seeing cameras may be trained on what you are buying but also are scanning the store, and you, at large — Lamb says the walk-out tech that Standard is offering is incredibly expensive and not at all scalable in the short term.

“You couldn’t overhead that,” said Lamb. “The maintenance alone, having to have AI engineers on site, plus the storage capacity needed for all the data you collect. The server room you would need would be intense.”

Running the Imagr system in one store uses the same amount of data as streaming HD Netflix for a day, the company said.

“Shopping carts just made sense to me because everyone already used carts or baskets, they were what retailers were comfortable buying and what users were comfortable using,” said Chomley. “It didn’t require a huge overhaul of the systems. It’s the method of least disruption, faster payback period, better customer experience and no privacy concerns.”

And while it’s within the realm of possibility that the approach of above-head tech gets cheaper over time, it’s not as quick or clear of a path to market, claimed Chomley.

“Amazon proved the market; it proved that the end user wants something frictionless, and I think that’s really healthy for our business,” said Chomley. “But what Amazon did is they built a supermarket for the technology, whereas we have built technology for a supermarket. And that’s where retailers will say we can’t process 1.6 terabytes of information every second. We need something that fits into our store and our operations.” 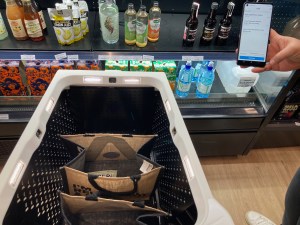 Lamb says many retailers look at Imagr as an elevation from the scan-and-shop because it’s not too far off in terms of pricing, but the difference is retailers get to see what’s in the cart. It’s a lot harder to shoplift by pretending to scan an item when the cart is watching and making a record of what goes in and out.

Imagr offers a white-label solution for retailers that they can own, operate and scale themselves. This means the retailer would own all the hardware, software and the white-labeled app. Imagr has a shared licensing agreement for data with retailers because it needs to get smarter and keep training its models. Lamb said that Imagr hopes to offer inventory analytics in the future to help retailers avoid inventory distortion.

“Our intention would be to essentially provide them the ability to track everything that comes in and out,” said Lamb. “In a perfect world, like, I don’t know all the Coke sells out, and it pings one of the retail workers in the store and she’s got to restock shelf 7A. That’s what we’re working towards. We don’t have a hard solution for it but there’s definitely demand for that.”

Corrections: A previous version of this article stated Shopic used barcode scanners but has since been updated with the correct information. This article has been updated to reflect that Amazon’s “Just Walk Out” technology is expanding internationally via its Amazon Go and Amazon Fresh stores.