Wildfires are burning in countries all around the world. California is dealing with some of the worst wildfires in its history (a superlative that I use essentially every year now) with the Caldor fire and others blazing in the state’s north. Meanwhile, Greece and other Mediterranean nations have been fighting fires for weeks to bring a number of massive blazes under control.

With the climate increasingly warming, millions of homes just in the United States alone are sitting in zones at high risk for wildfires. Insurance companies and governments are putting acute pressure on homeowners to invest more in defending their homes in what is typically dubbed “hardening,” or ensuring that if fires do arrive, a home has the best chance to survive and not spread the disaster further.

SF-based Firemaps has a bold vision for rapidly scaling up and solving the problem of home hardening by making a complicated and time-consuming process as simple as possible.

The company, which was founded just a few months ago (in March), sends out a crew with a drone to survey a homeowner’s house and property if it is in a high-risk fire zone. Within 20 minutes, the team will have generated a high-resolution 3D model of the property down to the centimeter. From there, hardening options are identified and bids are sent out to trade contractors to perform the work on the company’s marketplace.

Once the drone scans a house, Firemaps can create a full CAD model of the structure and the nearby property. Image Credits: Firemaps.

While early, it’s already gotten traction. In addition to hundreds of homeowners who have signed up on its website and a few dozen that have been scanned, Andrew Chen of a16z has led a $5.5 million seed round into the business (the Form D places the round sometime around April). Uber CEO Dara Khosrowshahi and Addition’s Lee Fixel also participated.

Firemaps is led by Jahan Khanna, who co-founded it along with his brother, who has a long-time background in civil engineering, and Rob Moran. Khanna was co-founder and CTO of early ridesharing startup Sidecar, where Moran joined as one of the company’s first employees. The trio spent cycles exploring how to work on climate problems, while staying focused on helping people in the here and now. “We have crossed certain thresholds [with the climate] and we need to get this problem under control,” Khanna said. “We are one part of the solution.”

Over the past few years Khanna and his brother explored opening a solar farm or a solar-powered home in California. “What was wild, whenever we talked to someone, is they said you cannot build anything in California since it will burn down,” Khanna said. “What is kind of the endgame of this?” As they explored fire hardening, they realized that millions of homeowners needed faster and cheaper options, and they needed them sooner rather than later.

While there are dozens of options to harden a home to fire, some popular options include constructing an ember-free zone within a few feet of a home, often by placing gravel made of granite on the ground, as well as ensuring that attic vents, gutters and siding are fireproof and can withstand high temperatures. These options can vary widely in cost, although some local and state governments have created reimbursement programs to allow homeowners to recoup at least some of the expenses of these improvements. 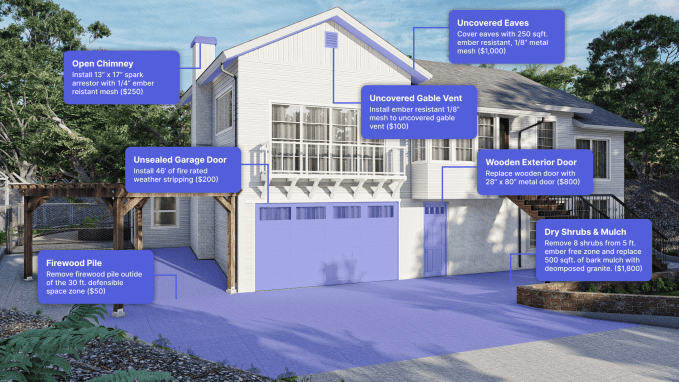 The company’s business model is simple: vetted contractors pay Firemaps to be listed as an option on its platform. Khanna believes that because its drone offers a comprehensive model of a home, contractors will be able to bid for contracts without doing their own site visits. “These contractors are getting these shovel-ready projects, and their acquisition costs are basically zero,” Khanna said.

Long-term, “our operating hypothesis is that building a platform and building these models of homes is inherently valuable,” Khanna said. Right now, the company is launched in California, and the goal for the next year is to “get this model repeatable and scalable and that means doing hundreds of homes per week,” he said.

Following the IPCC’s report, we need more technology to respond to more disasters