Amid a year of editorial pivots and employee exits, Medium announced today that it will make significant changes to its Medium Partner Program, which allows writers on the platform to monetize their content.

Founded in 2012, Medium launched its Partner Program in 2017. Since then, the platform has paid out $28 million to over 200,000 contributors. Initially, it offered payouts based on how much time Medium members spent reading a writer’s content. For $5 per month or $50 per year, Medium members could read all posts on the platform without hitting a paywall. Plus, part of each member’s subscription was split among the writers they read; so, if a Medium member spent 10% of their time reading one writer’s work, for example, that writer would get 10% of the subscriber’s revenue share.

Medium said that earnings based on read time will remain the same. But now, Medium will offer a new way to make money with the launch of a referral program.

Previously, if a reader converted to a paying member within 30 days of reading a writer’s story, that writer would get credit for the amount of time the reader spent reading their work. Under the new model, Partner Program writers will now have a personalized referral landing page — for any reader who purchases a Medium subscription via their page, the writer will get half of that member’s subscription fee for as long as they remain a paying member, minus the standard 2.9% + $0.30 in payment processing fees. So, if a writer got 100 readers to sign up for a monthly Medium membership through their referral, that would net the writer $227 per month. 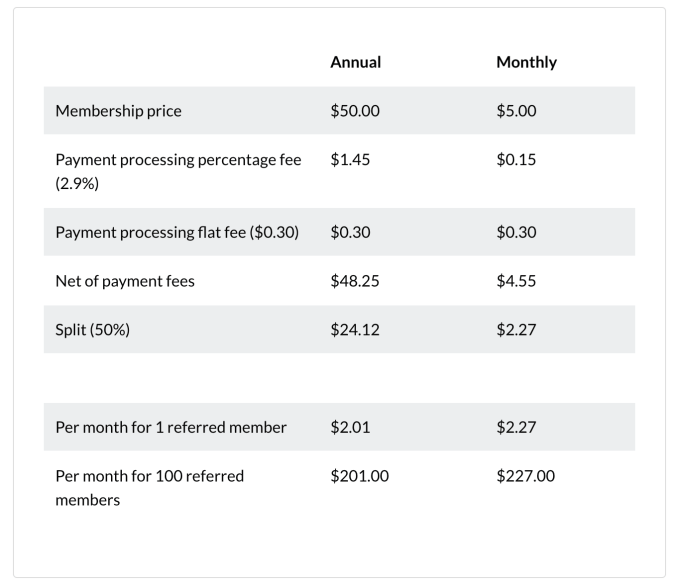 However, now it’s more difficult for a writer to join the Partner Program — writers must have 100 followers, at least one published Medium story, and they must live within specific geographic regions. Even if a Partner meets the new eligibility requirements, they might lose their status if they don’t publish anything new in a six-month period. Still, under the previous structure, just becoming a Partner didn’t guarantee financial rewards — some Partners with smaller followings would make pennies each month. Existing Partners will retain their status through the end of 2021, and if they haven’t reached 100 followers by then, they will be removed.

Also, Medium will soon institute a minimum payout threshold of $10, meaning that if a writer makes less than $10 in a month, that pay will roll over to the next month until they amass at least $10.

Medium has been reticent about its member numbers in the past, but CEO Ev Williams told TechCrunch in November that its member numbers were in the “high hundreds of thousands.” In March 2021, Medium had 725,000 members per Axios, but Digiday previously reported that Medium had hoped to reach 1 million members by 2020. As of September, its competitor Substack, founded in 2017, had 250,000 paid subscribers and raised a $65 million series B round two months later. Medium last raised venture funding in 2016 with a $50 million series C round.

Creators can now monetize their expertise on Quora

Platforms like Substack and the newer Ghost pay writers based on how many paying subscribers they have. Medium’s new revenue sharing model similarly incentivizes writers to corral readers to the platform, but Medium takes about 50%. For direct subscriptions to a writer’s individual newsletter, Substack takes 10%, and Ghost takes $9 per month. While Substack or Ghost readers might subscribe to multiple individual newsletters, Medium subscribers pay just one $5 monthly or $50 yearly fee to access all of the website’s content.

The newsletter business is competitive — in June, Facebook launched a newsletter platform called Bulletin with hand-picked contributors, and Twitter acquired Revue earlier this year. Then, last week, Quora unveiled a monetization platform called Quora+, which costs the same as a Medium membership. Similar to Medium, Quora+ subscribers get access to all content any writer chooses to put behind a paywall, and writers are paid based on engagement with their content. But writers can also write paywalled posts on Spaces, which are like user-created publications on Quora — Quora takes a 5% cut of those payments.