Sam Richard Contributor
Sam Richard is VP of Growth at OpenView.
More posts by this contributor

Everyone at an organization should own growth, right? Turns out when everyone owns something, no one does. As a result, growth teams can cause an enormous amount of friction in an organization when introduced.

Growth teams are twice as likely to appear among businesses growing their ARR by 100% or more annually. What’s more, they also seem to be more common after product-market fit has been achieved — usually after a company has reached about $5 million to $10 million in revenue. 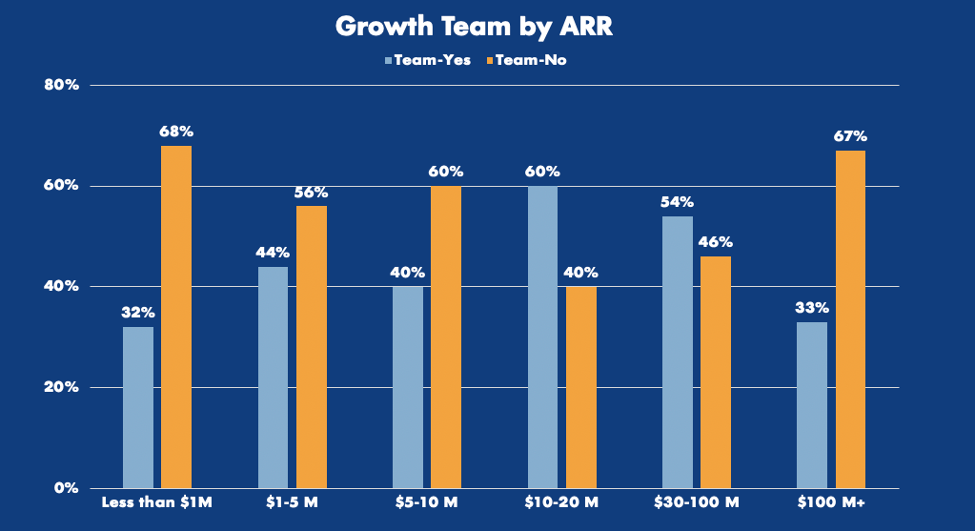 I’m not here to sell you on why you need a growth team, but I will point out that product-led businesses with a growth team see dramatic results — double the median free-to-paid conversion rate.

How do you hire an early growth leader?

According to responses from product benchmarks surveys, growth teams have transitioned dramatically from reporting to marketing and sales to reporting directly to the CEO.

Some of the early writing on growth teams says that they can be structured individually as their own standalone team or as a SWAT model, where experts from various other departments in the organization converge on a regular cadence to solve for growth.

My experience, and the data I’ve collected from business-user focused software companies, has led me to the conclusion that growth teams in business software should not be structured as “SWAT” teams, with cross-functional leadership coming together to think critically about growth problems facing the business. I find that if problems don’t have a real owner, they’re not going to get solved. Growth issues are no different and are often deprioritized unless it’s someone’s job to think about them.

Becoming product-led isn’t something that happens overnight, and hiring someone will not be a silver bullet for your software.

I put early growth hires into a few simple buckets. You’ve got:

Product-minded growth experts: These folks are all about optimizing the user experience, reducing friction and expanding usage. They’re usually pretty analytical and might have product, data or MarketingOps backgrounds.