More than one smartphone app startup has tried to convince you that by using their app you will miraculously stave off the ravages of age and flab. All I need to do is flip open my phone and reel off a few: Gyroscope, MyFitnessPal, Welltory, ActivityTracker, SleepCycle. The list goes on. You name it, there’s a health app for it.

But today you get to download and kick the tires on a new app that is laying claim to be able to literally slow your aging.

But now you can actually download the iPhone app here in the U.K. An Android version is on its way. The app will launch in the U.S./worldwide in the first week of September. A free version is available, but a premium subscription service of £30 a year will enable users to continuously monitor their biological age and the actions that are affecting it.

Humanity Inc. raises funding to allow us to monitor and affect our rate of aging

More on the app in a moment.

Meanwhile, the U.K.-based startup is clearly making waves amongst investors. It has now raised yet another seed funding round, this time totalling $2.5 million, from 65 health-tech and consumer-tech investors, taking its total raised to $5 million.

Humanity founders Pete Ward and Michael Geer have also built a “Science Advisory Board”, which includes Kristen Fortney, co-founder of BioAge; George Church, who helped map the Human Genome and a is a professor at Harvard Medical School; and Aubrey de Grey, a pioneer of the aging science movement and chief science officer at the SENS Research Foundation, amongst others.

Humanity has also been playing out the invite-only strategy famously employed by startups like Clubhouse to keep the hype building and users beta-testing the app, reaching over 10K users, with, they say, a “waiting list of tens of thousands”.

This strategy seems to have paid off. The startup says it’s now reached the maximum number of users on TestFlight (Apple’s app testing facility) and has steadily grown its waiting list.

Ward and Geer teamed up over two years ago with the idea of creating an app that could monitor your biological age and give out hints and tips on how to slow and — they say — possibly even reverse it. This is not beyond normal science. 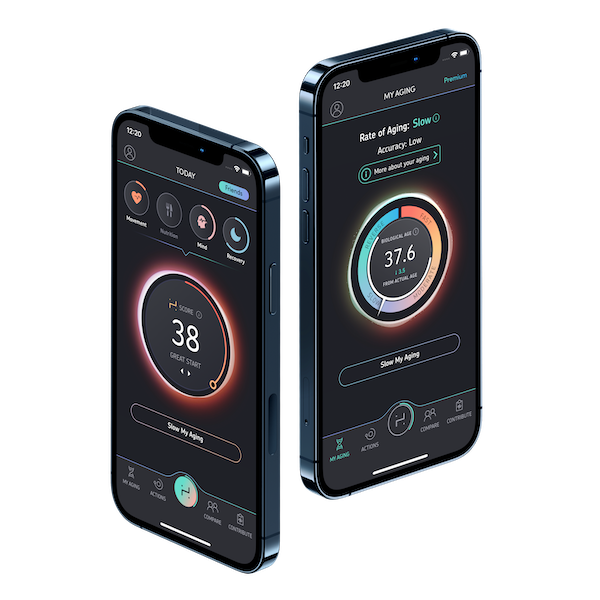 We are regularly told by doctors that you can extend your lifespan just by doing simple things like exercising regularly, cutting out fast food, and all that jazz. But what Ward and Geer realized was that you could take standard advice like “walk more” or “drink more water” and actually benchmark this stuff to a real-world population.

So the secret sauce in the Humanity app isn’t that it will tell you you’ve aged a little slower because you’ve had eight hours sleep, or similar. It’s because other people of your age and health profile did that, and you’re being compared to that real-world data. Because Humanity isn’t drawing on data of other users of its app, but on a scientific database.

Geer said: “Aging remains the leading cause of disease globally, but few people make the connection between aging and their overall health — and most feel ultimately helpless to tackle it. Being ‘healthy’ is quite a nebulous term as it is completely personal to each individual. Being able to monitor your aging provides a truly holistic indicator of health, which could help reduce your probability of disease and extend the healthy lives of millions.”

Humanity’s appearance is good timing. The Coronavirus pandemic appears to have cut life expectancy in England and Wales by one year, sending it back 10 years, with the poor hardest hit.

So how does the app actually work?

Humanity bills its app as being like the Waze traffic app, enabling you to navigate your way to a healthier lifestyle and “add years of fully functional, healthy life”, thus increasing your healthy lifespan, rather than living a reasonably long but unhealthy life.

After registering on the app, it takes you through the basics such as age and weight, and links into Apple Health.

You then get a “Humanity Score” (H Score) in the app under one of four key categories: movement, mind, recovery and nutrition. The higher the H Score the more likely you will see a slowing or reversal in the aging process over time, says the startup.

The app also connects with sensors in your smartphone and wearables to track data points such as heart rate, step rate, sleep and activity. This then feeds into your “rate of aging” and “biological age”, analyzing your profile and comparing it to data from the UK Bio bank.

The startup says it’s built algorithms validated against real-world outcomes from longitudinal biobanks (including the UK Biobank). These biobanks take anonymized data about the factors that affect a population’s lifespan. Humanity says it is drawing on in-house research and development alongside collaborations with the teams at Gero and Chronomics, and partnerships with companies like Illumina and Eurofins.

Using all of this data, the app then makes suggestions, such as to go for a run, meditate, get more sleep, etc. Admittedly any app could do this, but the fact that it is drawing on actual real-world data about what may really affect your lifespan does instill a great deal more confidence.

Geer told me over a call: “Health data is obviously some of the most personal data you can have. So we try to keep as much of that data actually just locally on your phone. We’re running our algorithms mostly on your phone. Some of that stuff will have to pass back to our servers, but that’s encrypted both at rest and when it’s in movement. The little that we do take to our servers we keep strictly secure.”

But, is Humanity trying to replace other health apps? What’s the long game here?

Ward told me: “We’re not trying to replace Calm or My Fitness Pal, etc. They’re actually part of the ecosystem that we will work with. What we want to do is really be a beacon for this way of using data, to actually know if people are getting healthier. Previously, this kind of health data was only available to study participants in universities, but we want everyone to be able to have this ability to compare their lifestyle to this real-world data. And we think this approach is far more powerful than the old-school ‘health app’ model of just telling you to ‘walk 10,000 steps’ or whatever.”

But there is a wider issue here. Are we looking at a new opportunity for startups to leverage this global Bio Bank data, which is generally held by academic institutions in almost every country? Perhaps we shall see more startups emerge, trying to use it in similar ways to the Humanity startup. Times, as is usually the case, will tell. However, at least for now, Humanity has the jump on that potential competition.