La Haus, which has developed an online real estate marketplace operating in Mexico and Colombia, has secured $100 million in additional funding, including $50 million in equity and $50 million in debt financing.

The new capital was obtained as an extension to the company’s Series B, the first tranche of which closed in January. With the latest infusion, Medellin, Colombia-based La Haus has now secured $135 million total for the round and over $158 million in funding since its 2017 inception.

The company declined to reveal at what valuation the extension was raised, with Sánchez-Ríos saying only that it was “a significant increase” from January.

The Series B extension follows impressive growth for the startup, which saw the number of transactions conducted on its Mexico portal climb by nearly 10x in the second quarter of 2021 compared to the 2020 second quarter. With over 500 homes selling on its platform (via lahaus.com and lahaus.mx) the company is “the market leader in selling new housing in Spanish-speaking Latam by an order of magnitude,” its execs claim. La Haus expects to have facilitated more than $1 billion in annualized gross sales by the end of the year.

The startup was founded with the mission of making it easier for people to buy homes and helping “solve Latam’s extreme housing inequality.” Its end goal is to accelerate access to new housing by both generating and curating supply and demand and then matching it with its technology, noted Sánchez-Ríos.

“In the last six months, our chief product officer has built a product that allows this to happen 100% digitally,” he said. “Before it would take a lot of time, people involved and visits. We want to provide people looking for a home a similar experience as to people looking for their next flight at delta.com.”

It has done that by embedding its software to developers’ new projects so that it can bring that digital experience to its users.

“They are able to view the projects on our sites, we match them and then they can see in real time which units of a particular tower are available, and then select, sign and pay for everything digitally,” Sánchez-Río said. 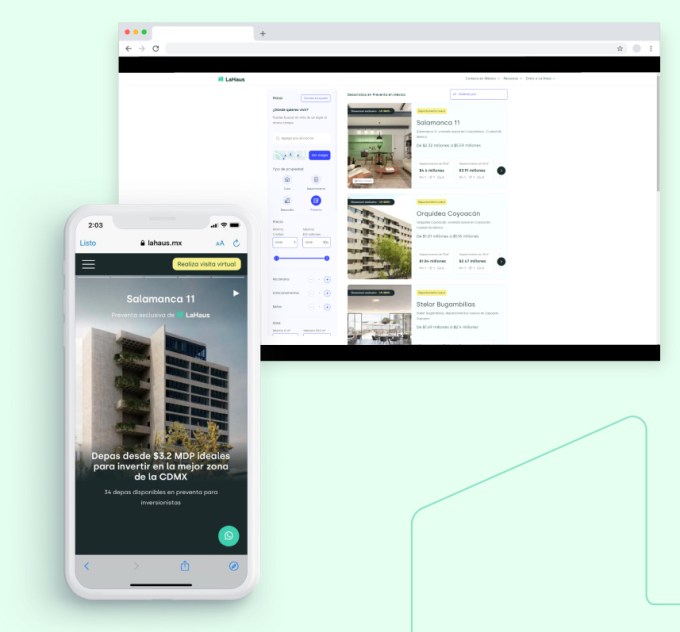 The need for new housing in the region and other emerging markets in general is acute, they believe. And the pace of building new homes is slow because small and midsized developers — who are responsible for building the majority of new homes in Latin America — are cash constrained. At the same time, mortgages are mostly not affordable for consumers, with banks extending only a fraction of the credit to individuals compared to the U.S., and often at far worse terms.

What La Haus is planning to do with its new capital — particularly the debt portion — is go beyond selling homes via its marketplace to helping extend financing to both developers and potential buyers. It plans to take the proprietary data it has been able to glean from the thousands of real estate transactions conducted on its platform to extend capital to developers and consumers “more quickly, with much lower risk and at better terms.

”Already, what the startup has accomplished is notable. Being able to purchase a home 100% digitally is not that easy even in the U.S. Pulling that off in Latin America — which has historically trailed behind in digital adoption — is no easy feat. By year’s end, La Haus intends to be in every major metropolitan area in Mexico and Colombia.
Its ultimate goal is to be able to help new, sustainable homes “to be built faster, alleviating the inequality caused by lack of access to inventory.”

To Acrew Capital’s Lauren Kolodny, La Haus is building a solution specific to the issues of Latin America’s housing market, rather than importing business models — such as iBuying — from the U.S.

“For many people in the United States home equity is their largest asset. In Latin America, however, consumers have been challenged with an impenetrable real estate market stacked against consumers,” she wrote via email. “La Haus is removing barriers to home ownership that stifles millions of people from achieving financial security. Specifically, Latin America has no centralized MLS, very costly interest rates, no transactional transparency, and few online informational tools.”

La Haus, Kolodny added, is breaking down these barriers by consolidating listings online, offering pricing transparency and educating consumers about their financing options.

Acrew first invested in the startup in its $10 million Series A and has been impressed with its growth over time.
“They have a unique focus on new housing — a massive industry worldwide, but especially in emerging markets where new housing is so necessary,” Kolodny said. “The management team … knows real estate in Latin America better than anyone we’ve met.”

For its part, the La Haus team is excited to put its new capital to work. As Sánchez-Río put it, “$50 million goes a lot further in Mexico and Colombia than in the U.S.”

“We are going to be very aggressive in Mexico and Colombia, and plan to go from four to at least 12 markets by the end of the year,” Jeronimo told TechCrunch. “We’re also excited to roll out our financing solution to developers and buyers.”

Brazilian proptech startup QuintoAndar lands $300M at a $4B valuation