Small and medium enterprises (SMEs) contribute heavily to the economic success of many countries, particularly those in the developing world. They are the backbone of most economies: Globally, SMEs represent about 90% of existing businesses and create more than 50% of employment.

In South Africa, these businesses contribute around one-third of the country’s GDP. Last year, the coronavirus pandemic threatened the existence of some of these SMEs, and its effects linger as owners worry about revenue, sales and cash flow.

Since launching in 2013, South African fintech Yoco has positioned itself as the go-to platform to access offline payments among merchants in the country. Today, the company is announcing $83 million in Series C funding to scale offline and online offerings and expand to new markets.

Despite South Africa’s high card and mobile penetration rates of over 70%, the country’s SMEs still struggle to accept cards. Yoco’s portable card machines have proved masterful in solving this problem; when TechCrunch covered the company three years ago after its $16 million Series B raise, it had little over 30,000 merchants using its platform. Now, that number has quintupled.

As Yoco grew exponentially in providing offline payments, it built an online offering. After being in beta for a while, the rollout came right on time some days into South Africa’s lockdown in March last year. This way, South African merchants could continue accepting payments on the platform.

“We want to offer whatever payment methods our merchants need. And we did start in the in-person payment space, focusing on terminals, which was where the biggest demand was,” chief business officer Carl Wazen said. “But the pandemic, which had a devastating effect on so many businesses that relied on in-person trade, accelerated the need for businesses to accept payments online.”

During the height of the lockdowns in South Africa, sentiment across SMEs owners on a scale of -100 to 100 dropped to an all-time low of -12 in Q2 2020, according to Yoco’s small business pulse monitor. It has since improved following the easing of the lockdowns, allowing businesses to move more freely and continue in-person payments. As a result, Yoco’s online payments account for a minute part of the transactions made on the platform.

But that’s not to say people are transacting with cash. In fact, it’s the opposite, according to Wazen. Wazen says one post-pandemic behavior he noticed was that once the lockdown was lifted, people came back to make in-person payments in an accelerated way because they stopped using cash. “Recent consumer behavior shows a shift away from cash, and businesses have to rapidly adapt to this change. This presents a huge opportunity, and it is our mission to support that transition,” he added.

Earlier this year, chief executive Katlego Maphai said Yoco was looking to expand its services into other aspects of digital payments. He listed mobile money, QR payments and electronic funds transfer (ETF) as offerings in its pipeline. Wazen corroborated this, but didn’t provide an update about where the company is with these offerings. He did mention, however, that the company is still very much a card-focused payment provider.

Yoco’s strategy as the foremost card payments provider in South Africa lies in creating access and removing barriers to adopting digital financial services. The company does that by focusing on product capabilities that Wazen claims are the most comprehensive for small and medium businesses. He adds that in terms of market presence, Yoco is also the easiest for merchants to access services through different channels seamlessly.

“We’ve got a brand that is recognized now. That’s how we win and it’s about staying as focused as possible on that part of the market that, in our opinion, people like other competitors are not focused on enough.”

South Africa has over 6 million small businesses that still transact only in cash; this provides a huge opportunity for Yoco. According to the company, the number of small businesses that were fully cashless jumped 300% from March to July 2020. Yoco currently serves 150,000 of these businesses and adds over 500 merchants per day. The company claims to be processing more than $1 billion in card payments per year, and in its six years of existence, it has processed over $2 billion in card payments. 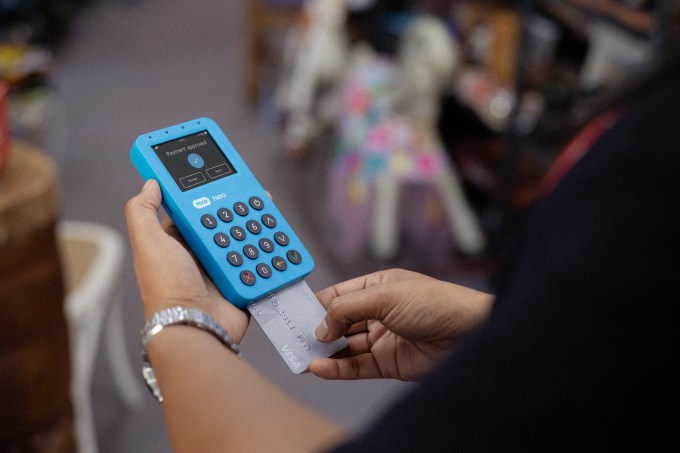 Yoco has raised a total of $107 million. The company’s Series C investment is the largest of its kind in South Africa and one of the largest for any African fintech (third only to Flutterwave and Chipper Cash). Wazen also claims it is the largest by any small business-focused payments platform in the Middle East and Africa.

Yoco is currently one of the most valuable startups on the continent, and as a fintech startup, it comes as no surprise. The sector continues to dominate startup venture capital funding in Africa while its heavy hitters bring first-time investors to the continent.

“We couldn’t be more excited to partner with the Yoco team,” Christian Jensen, co-head of private investments at Dragoneer, said in a statement. “At Dragoneer, we look for great teams that are building durable businesses with wonderful economic models, and that is exactly what we’ve found at Yoco. Yoco is already beloved by customers, and the product roadmap that the company is investing behind will drive even more value for merchants. While there is tremendous room for continued growth domestically, the opportunity for Yoco goes well beyond South Africa.”

There are three core enablers to Yoco’s thriving business, Wazen pointed out. First is its product capabilities, second is its platform and third is its market presence. This investment will be there to accelerate all three. Yoco is transitioning from a pure payment acceptance play into a full financial ecosystem on the product side. The platform play will see Yoco continue to integrate and take advantage of regulatory easing vertically, and Yoco is deepening its market presence in South Africa.

While Wazen believes Yoco has barely scratched the surface in South Africa, he’s looking forward to replicating its growth in other parts of Africa and the Middle East. With over 100 million SMEs transacting in cash across both regions, Yoco plans to reach at least a million within the next four years.

To accomplish this, Yoco is increasing its team by 200 people remotely and across its offices in Cape Town and Amsterdam within the next year. The company is also tapping into a current trend that has seen African soonicorns and unicorns hire former top employees from global companies to scale theirs to new heights. While it doesn’t mention names, some of Yoco’s new hires include a former VP of product at Monzo, a former product marketing director at Paypal and a former head of communications at Uber. The company has also brought on board a new chairman, Juan Fuentes, the former managing director of fintech unicorn Pagseguro.