Among Silicon Valley circles, a fun parlor game is to ask to what extent world GDP levels are held back by a lack of computer science and technical training. How many startups could be built if hundreds of thousands or even millions more people could code and bring their entrepreneurial ideas to fruition? How many bureaucratic processes could be eliminated if developers were more latent in every business?

The answer, of course, is on the order of “a lot,” but the barriers to reaching this world remain formidable. Computer science is a challenging field, and despite proactive attempts by legislatures to add more coding skills into school curriculums, the reality is that the demand for software engineering vastly outstrips the supply available in the market.

Coding is not a bubble, and Bubble wants to empower the democratization of software development and the creation of new startups. Through its platform, Bubble enables anyone — coder or not — to begin building modern web applications using a click-and-drag interface that can connect data sources and other software together in one fluid interface.

It’s a bold bet — and it’s just received a bold bet as well. Bubble announced today that Ryan Hinkle of Insight Partners has led a $100 million Series A round into the company. Hinkle, a longtime managing director at the firm, specializes in growth buyout deals as well as growth SaaS companies.

If that round size seems huge, it’s because Bubble has had a long history as a bootstrapped company before reaching its current scale. Co-founders Emmanuel Straschnov and Josh Haas spent seven years bootstrapping and tinkering with the product before securing a $6.5 million seed round in June 2019 led by SignalFire. Interestingly, according to Straschnov, Insight was the first venture firm to reach out to Bubble all the way back in 2014. Seven years on, the two have now signed and closed a deal.

Bubble lets you create web applications with no coding experience

Since the seed round, Bubble has been expanding its functionality. As a no-code tool, any missing feature could potentially block an application from being built. “In our business, it’s a features game,” Straschnov said. “[Our users] are not technical, but they have high standards.” He noted that the company introduced a plugins system that allows the Bubble community to build their own additions to the platform. 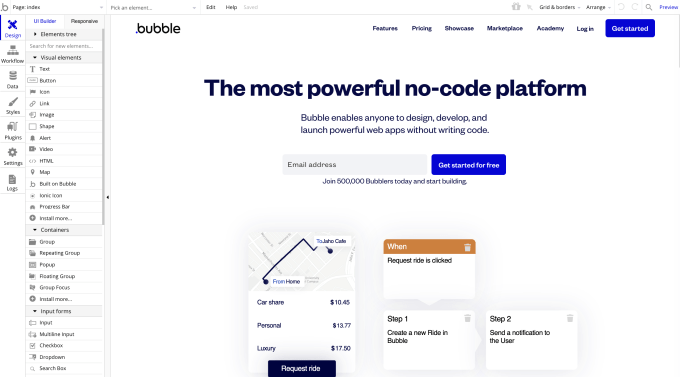 As the platform matured, it happened to nail the timing of the COVID-19 pandemic last year, which saw people scrambling for new skills and improving their prospects amid a gloomy job market. Straschnov says that Bubble saw an immediate bump in usage in March and April 2020, and the company has tripled revenue over the past 12 months.

Bubble’s focus for the past eight years has been on helping people turn their ideas into startups. The company’s proposition is that a large number of even venture-backed companies could be built using Bubble without the expense of a large engineering team writing code from scratch.

Unlike other no-code tools, which focus on building internal corporate apps, Straschnov says that the company remains as focused today on these new companies as it has always been. “[We’re] not trying to move upmarket just yet — we are trying to do the same thing that AWS and Stripe did five years ago,” he said. Instead of trying to dominate the enterprise, Bubble wants to grow with its nascent customers as they expand in scale.

The company today charges a range of prices depending on the performance and scale requirements of an application. There’s a free tier, and then professional pricing starts at $25/month all the way to $475/month for its top-listed offering. Enterprise pricing is also available, as is special pricing for students.

On the latter point, Bubble is looking to invest heavily in education using its newly raised capital. While the platform is easy to use, the reality is that any design of a web application can be intimidating for a new user, particularly one who isn’t technical. So the company wants to create more videos and documentation while also heavily investing in partnerships with universities to get more students using the platform.

While the no-code space has seen prodigious investment, Straschnov said that “I don’t look at all the no-code players as competition … the true competition we have is code.” He noted that while the no-code label has been assumed by more and more startups, very few companies are focused on his company’s specific niche, and he believes he offers a compelling value proposition in that category.

The company has doubled headcount since the beginning of the pandemic, growing from around 21 employees to about 45 today. They are lightly concentrated in New York City, but the company operates remotely and has folks in 15 states as well as in France. Straschnov says that the company is looking to aggressively hire technical talent to build out the product using its new funds.