More doesn’t necessarily mean better — and that’s a lesson for life and for tech. To focus on the latter, the startup ecosystem is experiencing a boggling influx of capital right now. However, the increase in dollars isn’t being evenly distributed to all founders. For the vast majority of people, especially women and nonbinary entrepreneurs, it’s still hard to raise money — and perhaps even harder than before the pandemic.

All Raise, a nonprofit that has for years worked to advance women and nonbinary folks within tech, has been watching closely the dip in funding for female and nonbinary founders. Per VP of Marketing Caroline Caswell, while pockets of progress do exist, funding for female founders is still “lukewarm.” She noted how in the first half of this year, 1.6% of venture capital went to female founders, down 30% from 2.3% in 2020, which was already a dip from the year prior, per PitchBook.

“The narrative that ‘VC is back?’ ” Caswell said. “It is back for the same people as it was before.”

The misconception that the hot-deal summer is benefitting everyone has given All Raise some urgency to launch a new product for women and nonbinary founders, which it’s announcing today.

The nonprofit is releasing a series of master classes meant to give an inside glimpse at raising first institutional rounds and scaling companies. The material, which includes pre-recorded sessions from All Raise’s in-person Founder Bootcamp, will be free to access for anyone interested.

Instructors include checkwriters such as Cowboy Ventures’ Aileen Lee and Benchmark Capital’s Sarah Tavel, as well as seasoned executives like Figma’s VP of Communications Nairi Hourdajian and Solv Health co-founder and CEO Heather Fernandez. All Raise said that it did not track ethnicity or racial data of its instructors, however it did offer a breakdown of the 400 beta users who tested the master class series. 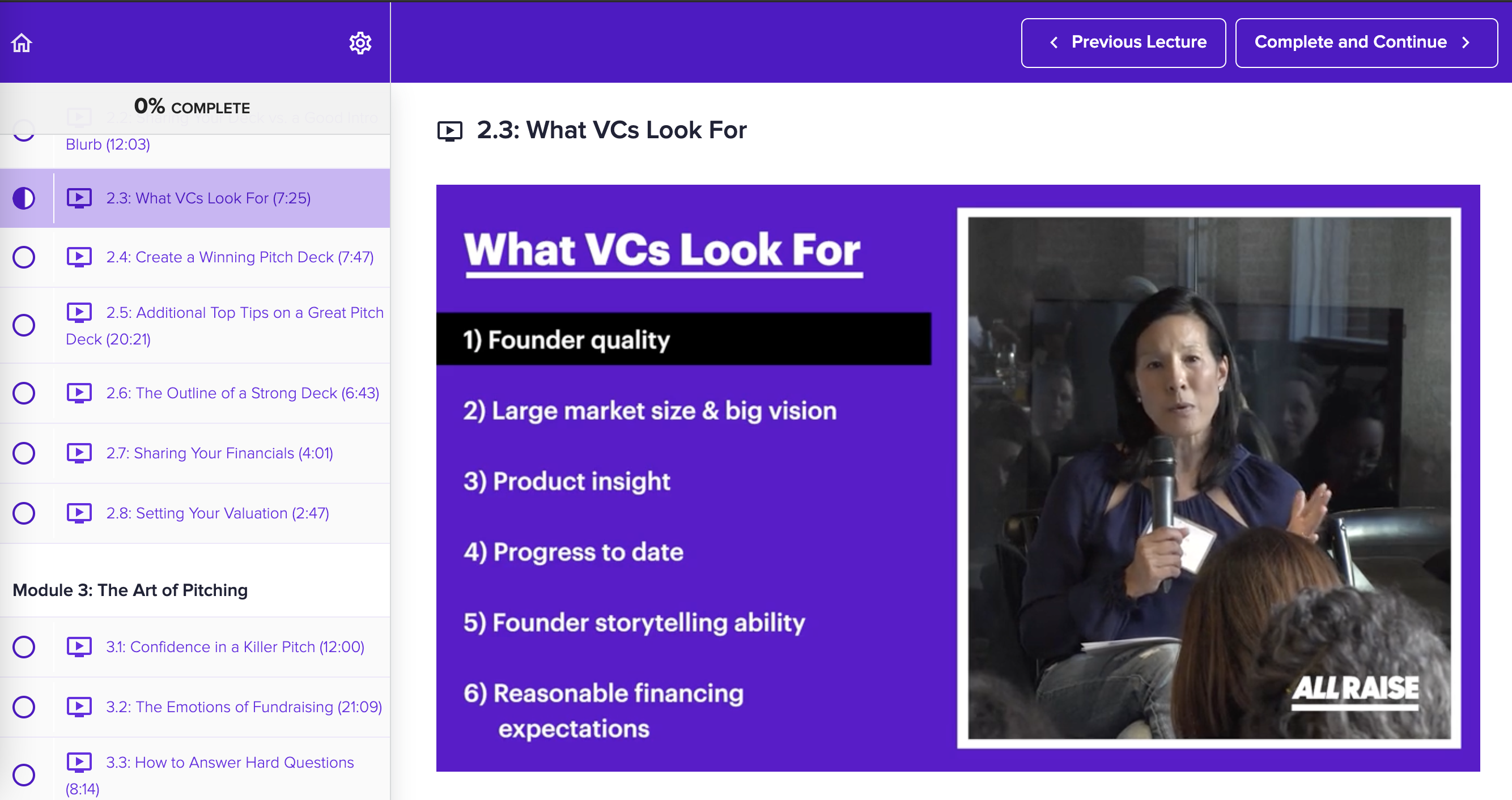 Users’ self-reported data shows that the largest concentration — 39% — of users are White, while 11% are African-American/Black and 6% are Latinx and Hispanic. Most users don’t identify as white.

There’s constantly a disconnect between tactical content on how to fundraise and true access to capital; tips don’t necessarily lead to a closed check, which leaves some founders skeptical of yet another launch of resources.

That said, Caswell says that the master classes are trying to move beyond the “typical Sandhill Road Medium post” or Twitter threads, and thinks that the explicitness and real-world examples could serve as an empowering tool to founders.

Topics range from basics like how to prepare for your Series A to more nuanced thoughts like the emotions of fundraising, and how to say goodbye to a team. The programming is meant to be a more intimate look at early-stage tech, beyond what you’d find on a Twitter thread, Caswell explains.

“When it comes to resources and insight for typically underrepresented founders, more is more is more,” she added. Lessons range between three to 60 minutes, and amount to some 15 hours of content.

The structure of All Raise’s master classes looks similar in format to what Y Combinator offers in its free series Startup School, which includes some light content specifically targeted toward female founders. Long-term, it’d be interesting to see how All Raise refreshes material to work more for online learning, as it already has an engaged community that it could easily turn into a living, breathing class that filters through the nonprofit’s other tools.