As we move toward a privacy-centric, less targeted future of growth marketing, the biggest lever will become creative on paid social channels such as the Facebooks of the world. The loss of attribution from our good friend iOS 14.5 has accelerated this trend, but channels have increasingly placed efforts toward automating their ad platforms.

Due to this, I believe that every growth marketing engine should have a proper creative testing framework in place — be it a seed-stage startup or a behemoth like Google.

After three years at Postmates, consulting for various startups, and most recently at Uber, I’ve seen the landscape of marketing change in a multitude of ways. However, what we’re seeing now is being orchestrated by factors out of our control, causing a dawn of shifts unlike anything I’ve seen. Creative has subsequently risen to become the most powerful lever in a paid social account.

If you’re looking to leverage the power of creative and succeed with paid social marketing, you’re thinking right. What you need is a creative testing framework: A structured and consistent way to test new creative assets.

Here’s a breakdown of the pieces a creative testing framework needs to be successful:

Creative has become the most powerful lever in a paid social account.

Testing creative should be a constant and iterative process that follows a defined testing schedule. A goal and structure can be as simple as testing five new creative assets per week. Inversely, it can be as complex as testing 60 new assets consisting of multiple themes and copy variations.

For a lower spending account, the creative testing should be leaner due to limited event signal and vice versa with a higher spending account. The most important aspect is that the testing continues to move the needle as you search for your next “champion” asset.

After setting a testing schedule, define the core themes of your business and vertical rather than testing a plethora of random ideas. This applies to the creative asset as well as the copy and what the key value props are to your product or service. As you start to analyze the creative data, you’ll find it easier to decide what to double down on or cut from testing with this structure. Think of this as a wireframe that you either expand or trim throughout testing sprints.

For a fitness app like MyFitnessPal, it can be structured as follows:

It’s vital to make sure you have a channel-specific approach, as each one will differ in creative best practices along with testing capabilities. What works on Facebook may not work on Snapchat or the numerous other paid social channels. Don’t be discouraged if creative between channels perform differently, although I do recommend parity testing. If you already have the creative asset for one channel, it doesn’t hurt to resize and format for the remaining channels.

Equally important to the creative is proper event selection and a statistically significant threshold to abide by throughout all testing. When selecting an event to use for creative testing, it’s not always possible to use your north-star metric depending on how high your CACs are. For example, if you’re selling a high-ticket item and the CACs are in the hundreds, it would take an enormous amount of spend to reach stat-sig on each creative asset. Instead, pick an event that’s more upper funnel and a strong indicator of a user’s likelihood of converting. 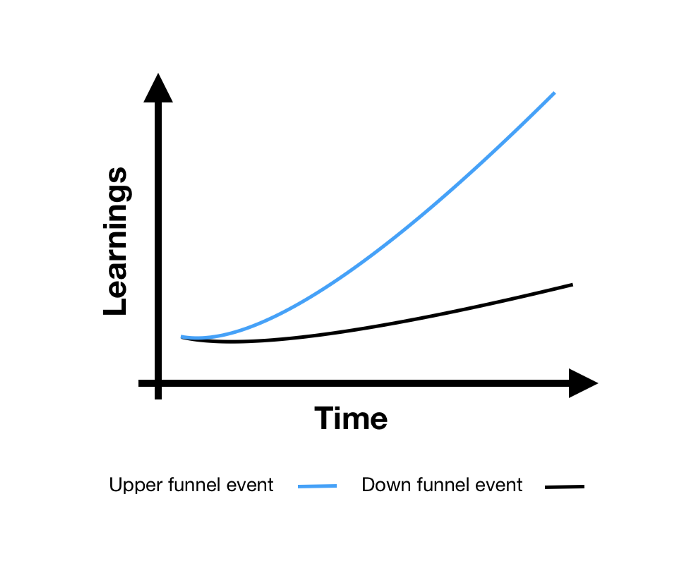 It’s important to select a percentage that stays consistent across all creative testing when deciding on which statistically significant percentage to use. As a rule of thumb, I like to use a certainty of 80%+, because it allows for enough confirmation along with the ability to make quicker decisions. A great (and free) online calculator is Neil Patel’s A/B Testing Significance Calculator.

You’re scrolling through a social feed, a sleek gold pendant catches your eye, but all the messaging has is the brand name and product specifications. It hooked your attention, but what did it do to reel you in? Think about it: What are you doing to not only hook, but reel people in with “creative” — the make or break it factor in paid social growth marketing?

Creative testing is only getting tougher for mobile campaigns as iOS 14.5 obfuscates user data, but that doesn’t equal impossible and simply means we need to get craftier. There are a variety of hacks that can be implemented to help gain clear insight on how creative is performing — some may not last forever and others may be timeless.

Amid all the privacy restrictions, we still have access to a huge population of users on Android that we should take advantage of. Instead of running all creative tests on iOS, Android can be used as a clear way to gather insights, as privacy restrictions haven’t rolled out on those devices yet. The data gathered from Android tests can then be taken directionally and applied to iOS campaigns. It’s only a matter of time until Android data is also at the mercy of data restrictions, so use this workaround to inform iOS campaigns now.

If running Android campaigns isn’t a viable option, another quick and easy solution is to throw up a website lead form to gauge the conversion rate from creative asset to a completed form. The user experience will certainly not be nearly as amazing as evergreen, but this can be used to gain insight for a short period of time (and small percentage of budget).

When crafting the lead form, think of questions that are both qualifying and would indicate someone completing your north-star event on the evergreen experience. After running people through the lead form, communications can be sent to convert them so ad dollars are being put to good use.

The testing efforts for creative asset types should differ widely by account stage and can be broken down into three I’s: imitation, iteration, innovation. 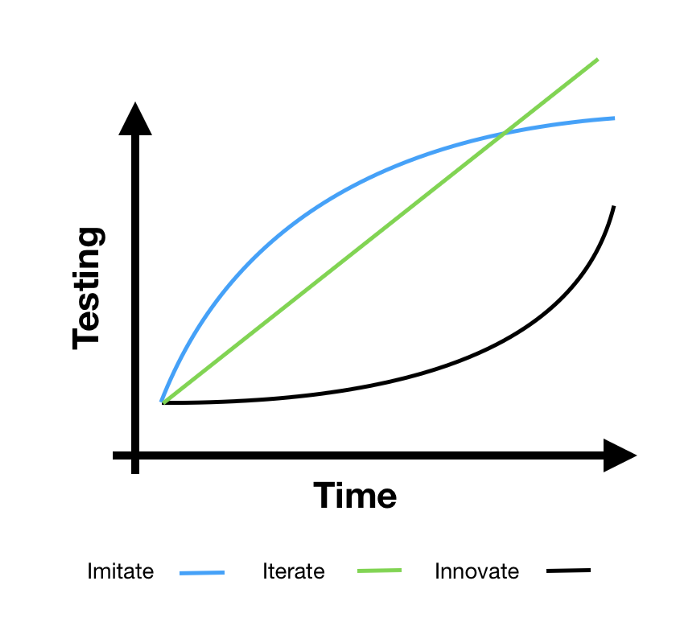 The type of creative testing should vary over time. Image Credits: Jonathan Martinez

The earlier an account stage, the more your creative direction should rely on what’s proven to work by other advertisers. These other advertisers have spent thousands proving performance with their assets, and you can gain strong insight from them. As time passes, you can slightly slow derivation from other advertisers while focusing on iterating on the best performers. If I had to place a percentage, 80% of the effort should be on imitation early on. Iteration will naturally gain steam as winners are deemed, and innovation will be the final, heavy-lagging prong.

This isn’t to say that innovation can’t be attempted early on if there are great ideas, but generally, a more mature company can afford to spend heaps to validate their innovative ideas. Whether you have an in-house design team or are working with freelancers, it’ll also be much easier to spin up 50 variations than it will be to think of and design 50 different innovative assets. Imitating and iterating will make your early testing exponentially more efficient.

Brainstorming and trying to imagine the most beautiful, eye-catching, hook-inducing creative doesn’t always happen within seconds, let alone minutes or hours. This is where utilizing competitor insights comes into play.

The most abundant resource is the Facebook Ads Library, because it contains all the creative assets every advertiser is using across the platform. It always surprises me how few actually know of this free and powerful tool.

When browsing through competitors or best-in-class advertisers in this library, a sign of a great performing creative is how long an advertiser has been running specific assets. How does one find that? The date of when an advertiser started running their creative is stamped conveniently on each asset — this is beyond powerful. I can spend hours scanning through creative assets, and each advertiser provides even more intel and inspiration.

Creative should be at the top of the list as you think of where to place efforts on your paid social growth marketing. We must have a hacky mindset as data becomes more obscure, but with that mindset comes separating the winners from the losers. The types of strategies put in motion will vary over time, but what won’t vary is the importance on strong creative, the make it or break it factor to success.