Titan, a startup that is building a retail investment management platform aimed at the new generation of “everyday investors,” has closed on $58 million in a Series B round led by Andreessen Horowitz (a16z).

The financing comes just over five months after Titan raised $12.5 million in a Series A round led by General Catalyst, and brings the startup’s total raised since its 2017 inception to $75 million. It values the company at $450 million.

General Catalyst also put money in the Series B round, along with BoxGroup, Ashton Kutcher’s Sound Ventures and a group of professional athletes and celebrities including Odell Beckham Jr., Kevin Durant, Jared Leto and Will Smith.

The startup, which describes itself as “a new-guard active investment manager,“ launched its first investment strategy in February of 2018 and today has 30,000 users. Titan’s platform grew by 500% in the last 12 months, largely organically, according to the company, which expects to cross its first billion in assets under management later this year. At the time of its last raise in February, Titan co-founder and co-CEO Joe Percoco said the startup was approaching $500 million in assets under management and was cash flow positive last year.

“What Fidelity and its iconic mutual funds were for baby boomers, Titan is for new generations. Titan is the first DTC, mobile-first investment platform where everyday investors, irrespective of wealth, can have their capital actively managed by investment experts in long-term strategies,” Percoco said.

He went on to describe the mutual fund or an ETF as “fundamentally just a piece of technology for an investment manager to accept money from someone in order to invest in securities.” He likened that piece of technology to a VHS tape that “does the job, but is archaic for a few reasons.” Those reasons, he said, are that the investor is an “anonymized dollar value” and the products have layers of costs with high minimums and are difficult to create.

“The factory that creates the mutual fund itself is very old. The entire investment management industry is predicated on these VHS tapes,” Percoco said. “These are the archaic technologies being used. We’re rebuilding it entirely. Fidelity is an old factory. Titan is effectively a new factory.” 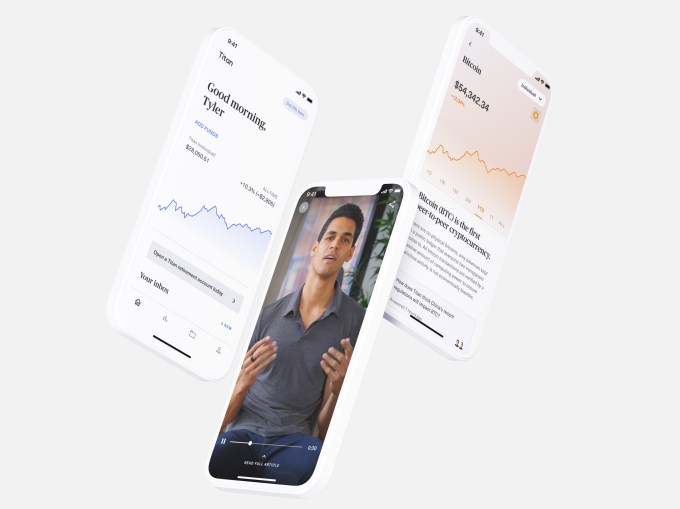 On August 3, Titan plans to launch its cryptocurrency offering, which the company claims will be the first and only actively managed portfolio of cryptocurrency assets available to U.S. investors. At launch, Titan Crypto will be available to all U.S. residents except those with home addresses in New  York. Access for NY-based residents will be provided once Titan’s custodial partner receives regulatory approval for the state’s jurisdiction.

Looking ahead, Titan said it plans to allow other investment managers to launch their products from its “factory.”

“The initial strategies on Titan’s platform are predominantly in stocks,” Percoco said. “We’re already getting in-bounds from multibillion-dollar managers asking to launch products on Titan.”

The company plans to use its new capital toward continuing to build out its underlying platform and suite of investment products as well as hiring. It currently has about 30 employees, up from seven a year ago. Percoco expects that Titan will have 100 employees by this time next year.

How to attract large investors to your direct investing platform

“If we pull back and look at trends happening in consumer investing, we can see that younger generations are embracing more risk in investing, that they demand easy to navigate, mobile-first interfaces and transparency from their banks, and that they want to deeply understand how their money is being invested and participate in the learnings from that process,” said Acharya, who will be joining Titan’s board as part of the financing.

In his view, Titan sits at an “interesting intersection” between passive robo-advisors and active stock-pricing, “allowing their customers to ride shotgun alongside some of the best fund managers in the world, thus achieving the returns and knowledge of stock picking without having to make the decisions themselves.”