Get your spool-of-yarn emojis ready — threads might be coming to Facebook soon. Facebook has been spotted testing a new feature that gives public figures on Facebook the ability to create a new post that’s connected to a previous one on a related subject. This feature ties the posts together more visually so fans can more easily follow updates over time. When the new post appears on followers’ News Feeds, it will be shown as being connected to the other posts in a thread.

Social media consultant Matt Navarra first spotted this feature in action, and shared several screenshots of how it looks. Reached for comment, Facebook confirmed to TechCrunch it’s testing the feature with a small group of “public figures” on Facebook for the time being. A public figure is a specific type of Facebook Page category aimed at high-profile individuals or anyone else who wants to establish a more public presence on Facebook. 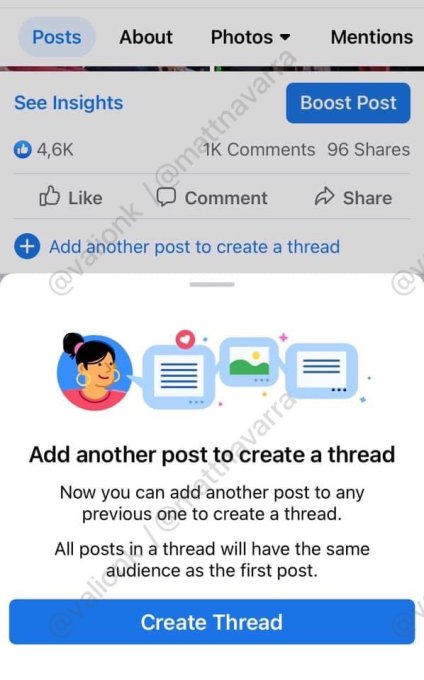 Facebook explained these threaded posts will have a “View Post Thread” button, which lets followers easily navigate to see all of the posts in the thread. When you tap on the button, you’ll be shown where you can see all the threaded posts connected together in one place.

Facebook was unable to confirm if or when the test would roll out more broadly to other public figures on its platform or if it would later expand to other Page categories, like Businesses, or to Facebook Groups.

Threads are useful on sites like Twitter, where the character limit makes it harder to have more nuanced conversations — that’s why we end up with those oh-so-beloved “notes app apology” posts on Twitter. (Now, Twitter promotes its Revue newsletter app when you write a thread). But on Facebook, your posts can be up to precisely 63,206 characters long (or, about 225 tweets).

Rather than inspiring longer posts, Facebook threads could be used for live commentary on an event like an award show. Or, users could post updates to their existing posts in a thread, rather than updating the original and making a clunky “edited to add…” announcement. Given that Facebook is testing this feature with public figures, perhaps its intended use is to make the sharing of news more streamlined.

It’s no secret that Facebook has dealt with some misinformation issues in the past, so for journalists or government officials sharing information about developing news events, threads could provide useful context.

This testing comes after Facebook announced its Bulletin newsletter offshoot earlier this week.