Starting today, Pinterest will prohibit all advertisers from sharing ads that promote weight loss. This includes any language and imagery that encourages weight loss, promotes weight loss products, idealizes certain body types, or references the BMI (which is often a poor indicator of overall health). This makes Pinterest the first major social media platform to take this stance.

Social media has played a role in promoting harmful beauty standards for as long as it’s existed. But even as “body positivity” has eclipsed the “thinspo” that proliferated on Tumblr a decade ago, sometimes, the trend can be a thin veil for weight stigma. Take a company like Weight Watchers, for example, which re-branded to WW (“Wellness That Works”) in 2018, yet continues to boast its members’ weight loss stories on its website. Even when online content about weight loss is well-meaning, it often contributes to a rise in disordered eating behavior rather than healthy habits, which is why the wellness industry can be so harmful.

Pinterest developed its updated ad policy with guidance from the National Eating Disorders Association (NEDA), which has also worked with platforms like Tumblr and Facebook in the past. Since March 2020, the onset of the pandemic in the US, NEDA has experienced an increase in activity on its helplines for people struggling with eating disorders. As Vox’s Rebecca Jennings pointed out, people started spending even more time online during lockdown, which means more exposure to content that makes us feel bad about ourselves. Even the TikTok-famous sixteen-year-old actress Sissy Sheridan tweeted, “i liked my body before i downloaded tik tok.” 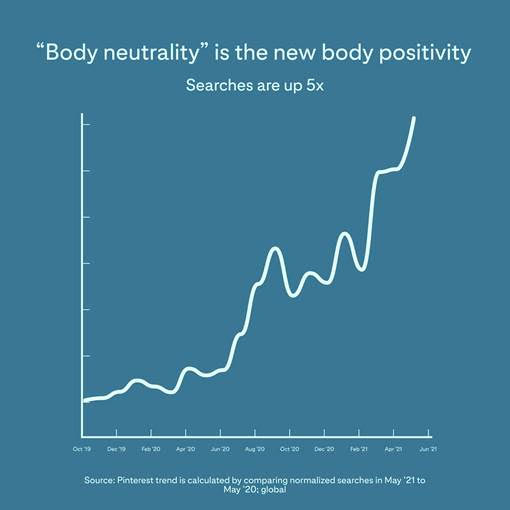 Pinterest’s new policy can make a tangible difference, especially if it sets a precedent for other major platforms to follow suit. Social media platforms have a responsibility to minimize the harmful activity that happens on their apps, but how far can the impact of these new policies extend? Pinterest reported that searches for “body neutrality” are up 5x since last year, offering an alternative to the “body positivity” movement, which is often just diet culture in a trench coat. But especially on algorithm-driven apps like TikTok, we can’t always control the content that comes up on your For You page. If you like to cook, TikTok will show you cooking videos, but the AI isn’t smart enough to filter out cooking accounts with “weight loss” in their bios if you don’t engage with that content. Pinterest recently launched its own TikTok competitor, and of course, Instagram is trying to capture the success of TikTok through its Reels.
Pinterest’s ad policy update is a good start, and one that can only have a positive impact if other platforms follow its lead. But social media reflects our culture back to us, and until there’s a broader cultural shift to understand that “weight loss” and “wellness” aren’t synonymous, an ad policy can only go so far.