SmartAsset, a marketplace that connects consumers to financial advisors, announced today that it has raised $110 million in a Series D round of funding.

The financing values New York-based SmartAsset at over $1 billion, and brings its total raised since its 2012 inception to just over $161 million, according to Crunchbase.

The company last raised in June of 2018 – a $28 million Series C led by Focus Financial Partners. Since then, it says it has grown revenue “by 10 times” and is now on the cusp of reaching $100 million in ARR (annual recurring revenue). It recently made its one millionth consumer/advisor match on its SmartAdvisor platform. Also in 2020, SmartAsset says it referred $10 billion in new, closed assets under management (AUM) to financial advisors and firms across the U.S.

Besides pairing consumers with advisors with its Automated Financial Modeling software, SmartAsset claims to reach over 100 million people each month through its personal finance content, tools and “personalized” calculators.

Prior to starting the company, Carvin worked in finance. In an interview with Y Combinator (one of its backers), he shared how his frustration in finding information about buying a home and getting a mortgage “that was useful, accurate and unbiased” led him to join forces with Philip Camilleri to found SmartAsset.

“Calculators had obvious errors and the content seemed like it was all written by people that wanted me to take out the largest mortgage possible,” he added. So the pair launched SmartAsset in an effort to provide people with the tools and content to help them make better decisions around topics such as retirement, taxes, savings, homeownership and insurance. 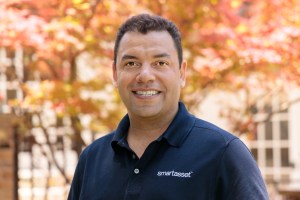 The company plans to use the new capital to invest in new product offerings, technology infrastructure and data partnerships. It also plans to boost its current headcount of 202 by more than 75% this year.

TTV Capital Partner Mark Johnson said the company “is quickly expanding its lead in one of the largest markets in the U.S. by providing an incredibly valuable resource for both consumers and financial advisors alike.”

The funding and its flashy valuation comes with a certain weight, even in the growing world of unicorn companies.

The company claims that, with today’s news, co-founder Michael Carvin now becomes the third Black founder and CEO of a company valued at over $1 billion. Others include Compass CEO and founder Robert Reffkin, whom we recently profiled here, and Calendly CEO and founder Tope Awotona, who we have also profiled.

While exciting, the unfortunate rarity of Black-led unicorns is a symptom of historical underfunding in Black or African-American startup founders. Crunchbase estimates that in 2020, 1% of total venture capital funding, or $1 billion, went to this cohort of founders.

“I hope seeing more successful Black founders inspires more people of color to start companies so that one day this is not news,” Carvin told TechCrunch.

A number of Black-led venture capital firms have closed investments in the past year, which could change this number, including Collab Capital’s $50 million investment vehicle, Harlem Capital, which closed a $134 million seed fund earlier this year; Cleo Capital, which set a $20 million target for Fund II; and MaC VC, which landed $103 million for its inaugural fund.

With a Series D under its belt, SmartAsset is working on taking out the bias from personal finance – while it itself is a case study in how overlooked founders, which routinely suffer from this exact phenomenon, continue to lead strong businesses.