This weekend, all of your friends morphed one by one into animated, Pixar-inspired characters. This isn’t a fever dream, and you’re not alone.

On Thursday, Snapchat released a Cartoon 3D Style Lens, which uses AR to make you look like a background character from “Frozen.” On Snapchat, over 215 million users have engaged with the Cartoon 3D lens, and it’s been viewed more than 1.7 billion times. Naturally, even though TikTok’s own AR cartoon effects aren’t quite as convincing as Snapchat’s, people are turning to TikTok to share videos of themselves as Disney princesses, because of course they are.

This isn’t the first time that a Disney-esque AR trend has gone viral. In August 2020, Snapchat had 28.5 million new installs, which was its biggest month since May 2019, when it got 41.2 million new installs. It might not be a coincidence that in early August 2020, Snapchat released the Cartoon Face lens, which users realized could be used to “Disneyfy” their pets — the tag #disneydog got 40.9 million views across platforms on TikTok. Then, Snapchat struck viral gold again in December, when they released the Cartoon lens, which rendered more realistic results for human faces than the previous iteration.

According to Sensor Tower, Snapchat’s global installs continued to climb month-over-month throughout the rest of 2020, though installs slightly declined in December. Still, Snapchat got 36 million downloads that month. Now, after the newest Cartoon Style 3D lens went viral again, Snapchat hit No. 6 on the App Store’s free apps charts, compared to TikTok’s No. 2 slot. Still, Snapchat downloads in May were 32 million, down from 34 million in April, while TikTok saw 80.3 million installs in May, up from 59.3 million in April.

But there’s a new app in the No. 1 slot that also made an impact on this weekend’s cartoon explosion. Released in March, Voilà AI Artist is yet another platform that turns us into cartoon versions of ourselves. Unlike the AR-powered effects on Snapchat or TikTok, Voilà is a photo editor. Users upload a selfie, and after watching an ad (the ad-free version costs $3 per week), it reveals what you would look like as a cartoon.

Voilà AI Artist was only downloaded 400 times globally in March 2021. By May, the app surpassed 1 million downloads, and during the first two weeks of this month alone, the app has been downloaded more than 10.5 million times.

Again, like the repetitive iterations on the “Disneyfy” trend, apps like Voilà aren’t new. FaceApp went viral in 2019, showing people what they’ll look like when they’re old, graying and wrinkled. The app became the center of a privacy controversy, since it uploaded users’ photos to the cloud to edit their selfies with AI. FaceApp made a statement that it “might store updated photos in the cloud” for “performance and traffic reasons,” but that “most images” are deleted “within 48 hours.” Still, this ambiguous language set off the warning bells, urging us to think about the potentially nefarious implications of seeing what we’ll look like in 60 years. Two years earlier, FaceApp put out a “hotness” filter, which made users’ skin lighter — FaceApp apologized for its racist AI. Voilà, which is owned by Wemagine.AI LLP in Canada, has also been criticized for its AI’s eurocentrism. As these apps grow in popularity, they can also uphold some of our culture’s most harmful biases. 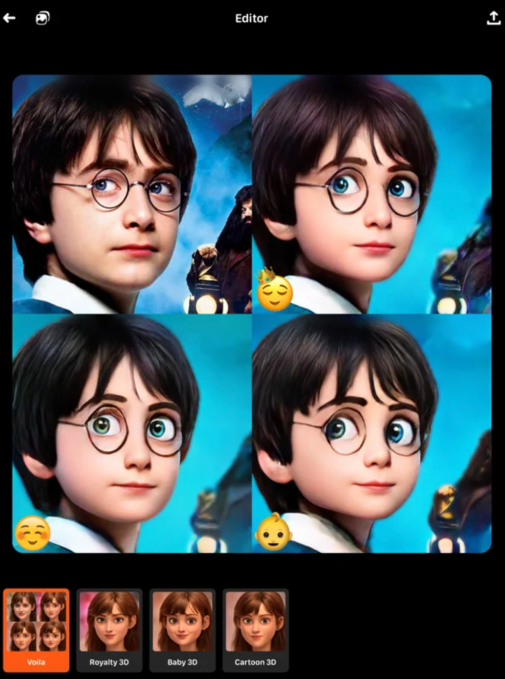 Like FaceApp, Voilà requires an internet connection to use the app. Additionally, its terms outline that users grant the company “a non-exclusive, worldwide, royalty-free, sublicensable, and transferable license to host, store, use in any way, display, reproduce, modify, adapt, edit, publish, and distribute Uploaded and Generated content.” Basically, that means that if you upload an image to the platform, Voilà has the right to use it, but they don’t own it. This isn’t abnormal for these apps — when we upload photos to Instagram, for example, we also grant the platform the right to use our images.

Still, it’s a good thing that apps like Voilà force us to consider what we give up in exchange for the knowledge that we’d make a good Disney princess. Earlier this month, TikTok updated its U.S. privacy policy to dictate that the app “may collect biometric identifiers and biometric information” from users’ content. This includes “faceprints and voiceprints,” terms that TikTok left undefined. When TechCrunch reached Tiktok for comment, they couldn’t confirm why the terms now changed to allow for the automatic collection of biometric data, which refers to any features, measurements or characteristics of our body that distinguish us, even fingerprints.

It’s no wonder that as Voilà climbed to the No. 1 slot on the App Store, Snapchat re-upped their Pixar-inspired AR lens. Facebook’s own Spark AR platform is rolling out new features, and last week at WWDC, Apple announced a major update to RealityKit, its AR software. But these trends reveal more about our growing comfort with face-altering AR than they do about our nostalgia for Disney.