Ford unveiled on Tuesday the Maverick, a new compact hybrid pickup truck for people who didn’t know they needed one.

The truck’s smaller more approachable size and its base price of $19,995 is geared toward entry-level customers who want that SUV or truck lifestyle as well as the ease of navigating and parking in tight urban centers. While it’s not an all-electric truck like the upcoming Ford F-150 Lightning, the Maverick is part of the company’s recently expanded plan to invest $30 billion investment in electrification by 2025.

The Maverick also has the distinction of being equipped with the first electric motor designed, developed, tested and manufactured in-house at Ford’s Van Dyke Transmission Plant. 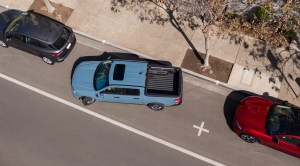 The electric motor and accompanying 2.5 liter engine produces 191 horsepower, 155 pound-feet of torque, and it can tow up to 2,000 pounds. That might not be attractive to those looking to haul one of the larger fifth-wheel campers on the market today. But with a targeted EPA fuel economy of 40 mpg in the city, Ford should find takers. Ford is also offering an option of the EcoBoost engine with an 8-speed automatic, that gives the Maverick 250 horsepower, 277 pound-feet of torque and towing capabilities of up to 4,000 pounds.

The Maverick will come standard as a front-wheel drive and be available in three trims, including the XL, XLT and the Lariat — similar to the F-Series variants. All-wheel drive upgrades are available.

A bed that’s also a “makerspace”

The bed of the truck comes in at a polite size of 4.5 feet high by 4 feet wide — as opposed to the F-150’s 5.5 by 4.3 foot bed — and is designed to be flexible. Ford, which wanted to be sure to get that message across, has branded it “flexbed,” because it’s, well, flexible to a range of needs.

Ford’s most popular pickup trucks, the F-150 series, are geared toward utility by providing plenty of wattage and storage for power tools. The Maverick is made with the DIY driver in mind. Ford has placed 12 available anchor points and slots that lets the owner subdivide as they might want. This so-called flexbed is equipped with two 12-volt 20-amp prewired sources, plus two 110-volt outlets for powering a “laptop or tailgate party,” as Ford suggests in a statement announcing the new vehicle.

Speaking of tailgates, the Maverick’s is multipositional, so the driver can adjust it to hold open at whatever position best suits whatever they’re hauling, giving the truck a bed extender functionality.

Another neat feature of the pickup being so small is that the bed is designed to be accessible by reaching over the bedside, and the designers specifically focused on ensuring things were within reach for the fifth percentile of female.

The Maverick is a fully connected vehicle, as we’ve come to expect with any new vehicle these days. Ford’s latest pickup has its own hotpot that can give blessed internet to up to 10 devices and it comes standard with Apple CarPlay and Android Auto. By connecting a smartphone, customers can access the FordPass app, which can be used to remote start the vehicle, lock and unlock doors, locate the truck and check fuel levels.

The compact pickup also has features of the Ford Co-Pilot 360, such as pre-collision assist with auto emergency braking, which alerts the driver through audio and visual signals. There are also high beam headlamps that flip on when no other cars are in front of you, a blindspot information system in case you just drift into another lane without checking over your shoulder, lane keep assist and adaptive cruise control. This tech also allows for five standard drive modes including normal, eco, sport, slippery and tow/haul.

The pickup’s interior has colorful accents that are used to denote a place that’s intended for human interface such as the center mat with a charging pad or the vents. Rather than fake leather and fake wood, the Maverick features stone-face textures and speckled plastic.

There are some Ford Integrated Tether Slots that allow for customers to mix and match with different accessories they want to add to the interior, like extra cupholders or an iPad holder to entertain the kiddos in the backseat. Because the fuel tank is located behind the cabin, rather than under the bench, customers have far more underseat storage space. Apparently that cabin can even hold buckets of ice for that tailgate Ford was talking about earlier.

The Maverick has also done away with the arm rests on the doors and speakers on the back doors, allowing more space for those tall S’well water bottles everyone loves.