Restrictions put in place by Nevada regulators are making it difficult for The Boring Company (TBC) to meet contractual targets for its LVCC Loop, Elon Musk’s first underground transportation system.

The Loop system at the Las Vegas Convention Center (LVCC) is supposed to use more than 60 fully autonomous high-speed vehicles to transport 4,400 passengers an hour between exhibition halls. However, TechCrunch has been told that Clark County regulators have approved just 11 human-driven vehicles so far, set strict speed limits and forbidden the use of on-board collision-avoidance technology that is part of Tesla’s “full self-driving” Autopilot advanced driver assistance system. Tesla’s Autopilot system technically does not rise to the level of fully autonomous, even though it is branded as such. It is considered — even internally, according to exchanges between Tesla and California regulators — an advanced driver assistance system that can automate certain functions.

LVCC’s parent body, the Las Vegas Convention and Visitor’s Authority, created a contract aimed at incentivizing Musk and ensuring promises are met. The contract is for a fixed price, and TBC has to hit specific milestones to receive all of its payments. The contract provides payments at different points in the process, such as completing the bare tunnels, the entire working system, finishing a test period and safety report and then demonstrating it can carry passengers. The final three milestones relate to how many passengers it can carry. If the Loop can demonstrate moving 2,200 passengers an hour, TBC will get $4.4 million, then the same payment again for hitting 3,300, and the same again for 4,400 passengers an hour. Together, these capacity payments represent 30% of the fixed-price contract.

Instead of moving more than 4,000 passengers an hour, the constrained system could limit the capacity to less than 1,000, exposing TBC to hefty penalties for missing contractual targets. TBC doesn’t generate revenue from charging passengers (the rides are free).

Update: Shortly after publication, Steve Hill, president of the Las Vegas Convention and Visitors Authority (LVCVA), tweeted that a Loop test this week, with a few hundred participants, had demonstrated its planned 4,400 passenger per hour capacity. This could release the additional construction funds mentioned below. TBC still has to achieve this figure during actual conferences in the months ahead to avoid penalties. TechCrunch shared its reporting with the LVCVA, Clark Country and TBC numerous times, over a period of weeks, prior to publication. Only LVCVA provided a substantive reply, and none addressed the question of capacity, nor the outstanding questions about children or passengers with mobility issues.

For instance, during a large trade show like CES, the LVCC will pay TBC $30,000 for every day it operates and manages the system, according to a management agreement newly obtained by TechCrunch. However, the original contract signed by TBC in 2019 specifies a $300,000 penalty for each large convention where TBC cannot move around 4,000 people per hour.

This means that over the course of a three- or four-day event, TBC stands to lose hundreds of thousands of dollars, above and beyond the cost of running the system. In a typical pre-pandemic year, LVCC would host around a dozen such large shows. It’s unclear if TBC is planning on another means of making money such as revenue from advertising in its cars.

The Boring Company goes brick-and-mortar with The Brick Store

This capacity issue is already costing TBC money. The contract states that if TBC misses its performance target by such a margin, Musk’s company will not receive more than $13 million of its construction budget. The convention center authority confirmed to TechCrunch that, per its contract, it is withholding that construction fee until TBC can demonstrate moving thousands of people an hour.

Smaller shows, numbering about 20 a year, carry no capacity penalties but earn TBC a much smaller fee of just $11,500 a day, according to the agreement. TBC also receives a monthly payment of $167,000 to keep the system ticking over, regardless of how many conventions are running.

A capacity test of the Loop this week reportedly involved just 300 people; a Convention Center official did say the 4,400 people-per-hour figure was “well within our sights.”

As well as its team of human drivers, TBC has to staff an operations center and a maintenance and charging facility, and provide uniformed customer service personnel, security staff and a full-time resident manager, according to the management agreement.

The fee structure is set to be renegotiated — presumably downwards — by the end of 2021, to incorporate the “expected transition to autonomous vehicle operations.” 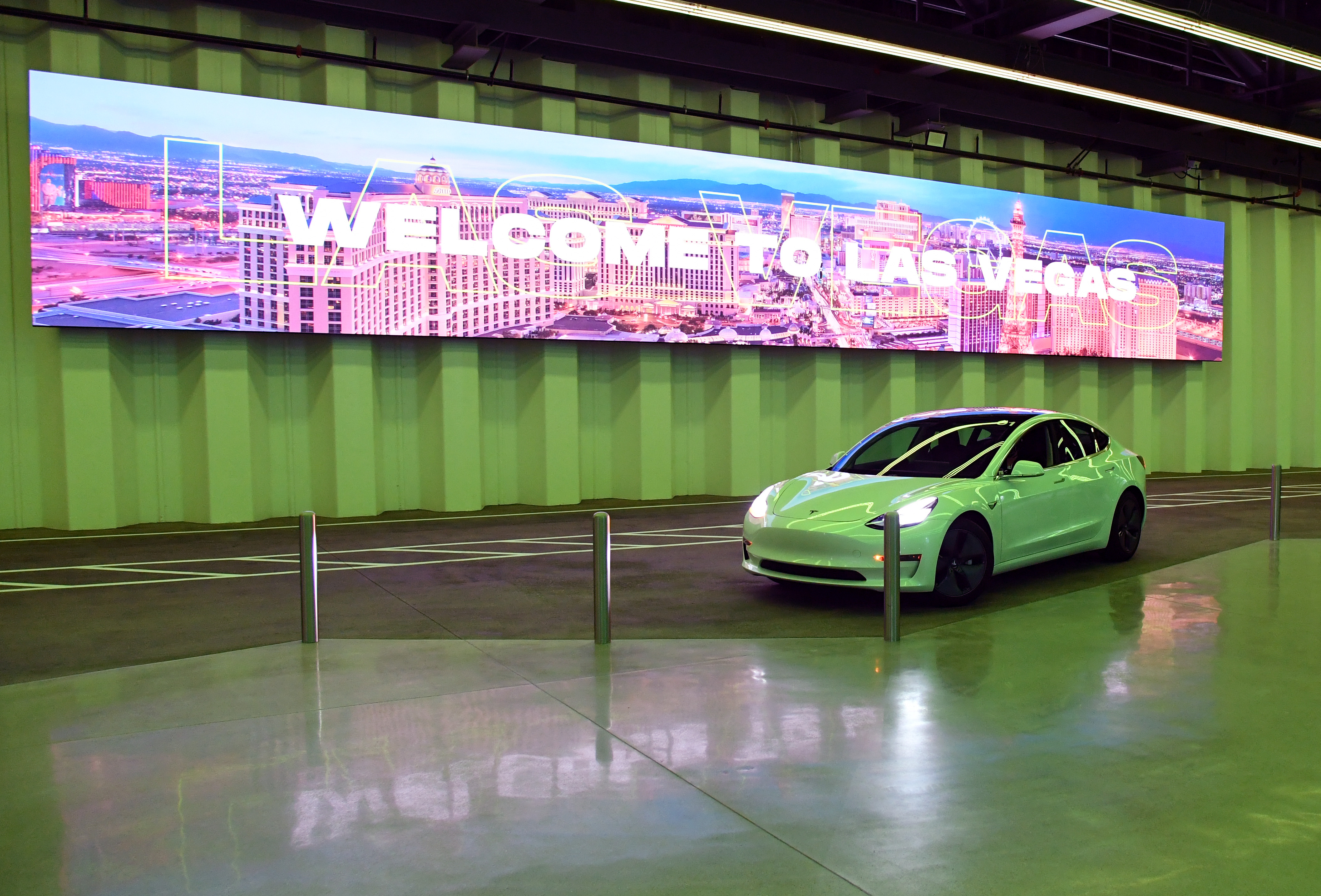 Some of the restrictions on the Loop’s initial operation came from the Clark County Department of Building and Fire Prevention. These reportedly include a 40 mph overall speed limit, dropping to 10 mph within each of the Loop’s three stations, and a restriction to just 11 vehicles.

Deputy Fire Chief Warren Whitney of the Clark County Fire Department said that TBC had told him the company wasn’t allowed to use Tesla’s collision warning systems within the Loop. A transportation system certificate issued by Clark County this week specified that the Loop must use “non-autonomous” “manually driven” vehicles. It was issued for the planned 62 vehicles. Neither Clark County officials nor TBC provided responses to detailed questions on the operational restrictions, nor indicated when or if they could be lifted.

Toyota has previously warned that its radar-based collision warning system may not function correctly within tunnels.

It is not clear whether the Teslas are capable of safe and “fully autonomous operation” without their collision-warning radars, although Musk has suggested — and now executed on a plan — to remove radar sensors from its vehicles and only use cameras. Tesla started delivering Model 3 and Model Y vehicles in May that do not have radar sensors. The lack of radar sensors has prompted the National Highway Traffic and Safety Administration to say that Model 3 and Model Y vehicles built on or after April 27, 2021 will no longer receive the agency’s check mark for automatic emergency braking, forward collision warning, lane departure warning and dynamic brake support. The decision also prompted Consumer Reports to no longer list the Model 3 as a Top Pick, and the Insurance Institute for Highway Safety said it plans to remove the Model 3’s Top Safety Pick+ designation.

The Fire Department also had concerns about dealing with emergencies within the tunnels, including battery fires that can potentially last many hours. “There have been cases where electric cars have caught fire without an accident,” Whitney told TechCrunch. “Our plan right now would be just to get the people out, then pull back and let the fire continue to burn.”

Whitney noted the system has many cameras and smoke alarms, as well as a “robust” ventilation system that can move 400,000 cubic feet of air per minute in either direction down the tunnels. This should allow passengers and drivers to escape on foot around the cars. For less serious incidents, TBC has a tow vehicle (also a Tesla) to extract broken-down cars.

Neither TBC nor Clark County replied to TechCrunch queries about whether the Loop would be allowed to transport wheelchair users, children or infants usually requiring car seats, people with other mobility issues or pets and support animals.

Firefighters have already conducted multiple drills in the underground system, including simulated accidents far from a station, with two or three other vehicles in the way. “Eleven cars is definitely doable,” says Whitney. “But when you start increasing numbers of cars, it may be a problem. [TBC] is a for-profit company and is going want to maximize the efficiency, so there may be further discussions as they try to increase the capacity.”

Not only does TBC want to use more vehicles in the existing Loop, it is already planning to expand the system. At the end of March, TBC told Clark County that it had broken ground on an extension from one LVCC station to the new Resorts World hotel, and it is has permission for a similar spur to the Encore nearby.

More significantly, TBC also wants to build a transit system covering much of the Strip and downtown Las Vegas with more than 40 stations connecting dozens of hotels, attractions and, ultimately, the airport. That system would be financed by TBC and supported by ticket sales.

The viability of those expansions could depend on how soon TBC can meet the technological and operational promises it made for its relatively simple LVCC Loop, and demonstrate whether taxis in tunnels can generate as much revenue as they do column inches.