Investors are backing Koo, an Indian alternative to Twitter, with large size checks at a time when tension is brewing between the American social network and New Delhi.

The Indian startup said on Wednesday it has raised $30 million in a financing round led by Tiger Global Management. Mirae Asset, IIFL’s venture capital fund and existing investors 3one4 Capital, Blume Ventures and Accel also participated in the round, which valued the Bangalore-based startup at over $100 million, up from about $25 million in February.

Like Twitter, the Koo app allows users to publish posts in English and half a dozen Indian languages. Its interface, logo and social sharing mechanism are strikingly similar to those of Twitter.

The app has gained popularity in India in recent months following flare-ups between Twitter and the Indian government after the San Francisco-headquartered firm refused to block accounts that criticized New Delhi and Prime Minister Narendra Modi earlier this year.

(The Indian government, like Singapore’s, also ordered Twitter and Facebook last week to take down posts that identified a new variant of the coronavirus as the “Indian variant.” Also last week, New Delhi objected to Twitter’s labeling of some of its politicians’ tweets as manipulated media. Earlier this week, police in Delhi visited Twitter offices to “serve a notice.”) 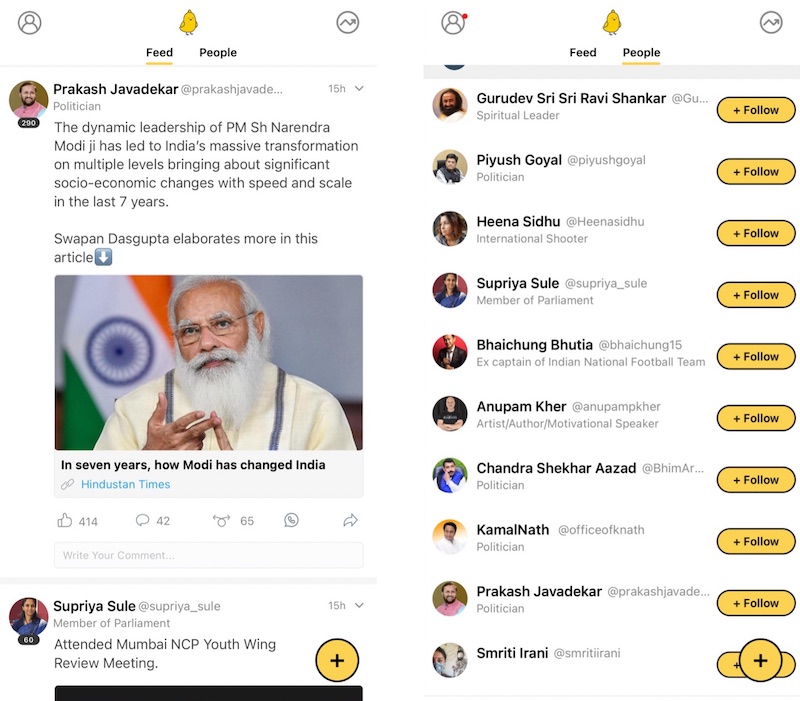 Though the app — co-founded by Aprameya Radhakrishna (who also co-founded TaxiForSure, which was sold to local giant Ola; and is a prolific angel investor) — has won the trust of investors, it has yet to gain ground.

Koo app, which was launched last year, had fewer than 6.5 million monthly active users in India in April, according to mobile insight firm App Annie (data of which an industry executive shared with TechCrunch).

The startup says it aims to build a social network for the entire nation and not just a fraction of it. Twitter remains largely popular among users in urban cities in India.

“We have aggressive plans to grow into one of the world’s largest social media platforms in the next few years. Every Indian is cheering for us to get there soon,” said Radhakrishna in a statement.

Koo, whose initial traction has been credited to Hindu nationalists, is currently one of the handful of social networks that has complied with India’s new IT rules that grant New Delhi greater power to take down posts it deems offensive.

The revised IT rules, announced in February, would put an end to “double standards” by making platforms more accountable to the local law, government officials said then. Failure to comply might bereft social networks of safe harbor protections they enjoy.

Koo is the latest investment from Tiger Global in India this year. The hedge fund, which has backed over 20 Indian unicorns, has emerged as the most prolific investor in Indian startups in recent months, winning founders with its pace of investment, check size and favorable terms.