If you’ve ever been self-employed you know what a pain it is to keep up with the hassles of running a business. From bookkeeping to invoicing to paying taxes — it’s one big headache.

Freelancers and self-employed people often turn to a number of different solutions to try and address different aspects of running their business. It can be a lot to keep up with.

Enter Found. Previously called Indie, the startup was founded by two former Square execs who got firsthand insight into how SMBs paid their employees.

Lauren Myrick joined Square in 2010 and was the second project manager at the company. She helped launch its first POS (point-of-sale) product and its SaaS products. She eventually became GM of its payroll business unit, and that was her first foray into taxes and understanding their implication. Co-founder Connor Dunn ran engineering for Square Payroll.

After that experience, the pair saw an opportunity to launch a suite of services for self-employed businesses, which have been growing even faster during COVID.

“We started to pay attention to the movement toward self-employment,” Myrick told TechCrunch.

So in 2019, the pair interviewed “lots” of self-employed people to better understand their pain points. What they found is that taxes and expense tracking were considered among the more painful and expensive parts of being self-employed. So they formed Found (formerly called Indie) with the goal of creating a “one-stop shop” for business banking, bookkeeping and taxes for self-employed businesses.

And today, the San Francisco-based startup has raised $12.75 million in a round led by Sequoia that also included participation from some angel investors. 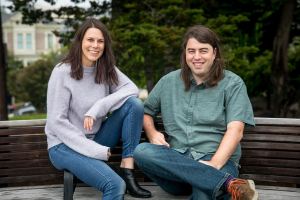 Myrick is no stranger to being self-employed herself, having worked as a public accountant after college. Also, her sister is a self-employed yoga instructor.

In Found, Myrick’s two previous professional worlds have come together.

“With my accounting background and what I learned at Square, I had this big aha moment that we could become a ledger for these businesses, and solve their bookkeeping and tax needs through software,” she said. “So that’s what we’ve built.”

Customers can use the platform to do things like deposit business income, obtain a debit card for business purchases and calculate how much they owe in taxes. The platform also offers a feature that sets aside the money for, and facilitates, the quarterly tax payments, for example. It also offers real-time business and tax reports, so when a business owner swipes their card, expenses are reflected in real time.

6 VCs share their bets on the future of work

Sequoia’s Josephine Chen and Alfred Lin said they were impressed with Myrick from their first call with her.

“Lauren has incredible context and command of the details. She talked about the hoops self-employed people have to jump through to fill out their Schedule Cs; she explained some of the finer points of different tax codes — and we were riveted,” the pair say.

Lin said he was particularly intrigued by the concept of Found because while he was in graduate school he ran a small data analysis business on the side.

“I had to invoice, report on taxes and do my own bookkeeping,” he recalls. “And I kept it together with a spreadsheet. I thought to myself that there should be better tools to do some of this stuff. And that is what Lauren has done with Found.”