Google is working with BMW and other automakers to develop a digital key that will let car owners lock, unlock and start a vehicle from their Android smartphone, the company announced Tuesday during its 2021 Google I/O developer event.

The digital key is one of many new features coming to Android 12, the latest version of the company’s mobile operating system. The digital car keys will become available on select Pixel and Samsung Galaxy phones later this year, according to Sameer Samat, VP of PM for Android & Google Play. The digital car key will be available in yet unnamed 2022 vehicle models, including ones made by BMW, and some 2021 models.

The digital key uses so-called Ultra Wideband (UWB) technology, a form of radio transmission for which the sensor can tell the direction of the signal, sort of like a tiny radar. This lets the antenna in your phone locate and identify objects equipped with UWB transmitters. By using UWB technology, the Android user will be able to lock and unlock their vehicle without taking their phone out. 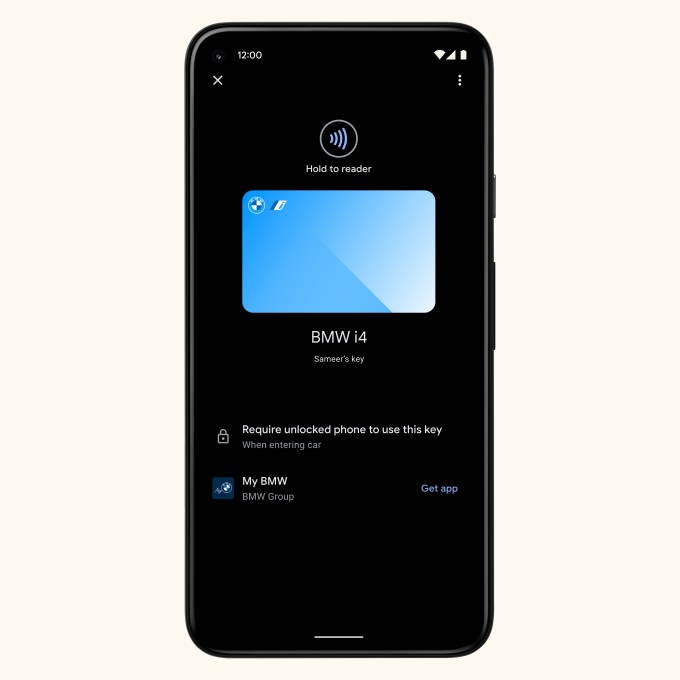 Consumers who own car models that have enabled NFC technology, or near-field communication, will be able unlock their car by tapping their phone against the door. The phone communicates with an NFC reader in the user’s car, which is typically located within the door handle. Google said users will also be able to securely and remotely share their car key with friends and family if they need to borrow the car.

The announcement follows a similar move made by Apple last year that allowed users to add a digital car key to their iPhone or Apple Watch. That feature, which was part of iOS 14, works over NFC and first became available in the 2021 BMW 5 Series.

A growing number of automakers have developed their own apps, which can also control certain functions such as remote locking and unlocking. The big benefit, in Google’s and likely Apple’s view, is that by offering the digital car key in its mobile operating system, users don’t have to download an app.

The intent is for a less clunky experience. And there’s a movement to make it even more seamless. The Car Connectivity Consortium, which Apple, Google and Samsung along with automakers BMW, GM, Honda, Hyundai and Volkswagen are members of, have spent the past several years creating an underlying agreement to make it easier to work in a seamless way and to standardize a digital key solution.

The development of the digital car key is just part of Google’s push to ensure the smartphone is the centerpiece of consumers’ lives. And it’s a goal that can’t be achieved without including vehicles.

“When purchasing a phone these days, we’re buying not only a phone, but also an entire ecosystem of devices that are all expected to work together — such as TVs, laptops, cars and wearables like smartwatches or fitness trackers,” Google’s VP of engineering Erik Kay wrote in a blog post accompanying the announcement during the event. “In North America, the average person now has around eight connected devices, and by 2022, this is predicted to grow to 13 connected devices.”

Google said it is expanding its “fast pair” feature, which lets users pair their devices via Bluetooth with a single tap, to other products, including vehicles. To date, consumers have used “fast pair” more than 36 million times to connect their Android phones with Bluetooth accessories, including Sony, Microsoft, JBL, Philips, Google and many other popular brands, according to Kay.

The feature will be rolled out to more devices in the coming months, including Beats headphones as well as cars from BMW and Ford, Samat said during Google I/O.