Speaking isn’t simple for at least 40 million Americans, so a new Austin-based startup is scaling a solution. Expressable is a digital speech therapy company that connects patients to speech-language pathologists (SLP) via telehealth services and asynchronous support, and it has raised a new $4.5 million seed round.

Launched in 2019 by married co-founders Nicholas Barbara and Leanne Sherred, Expressable has served thousands of families to date. Today, the duo announced its seed funding, co-led by Lerer Hippeau and NextView Ventures, with participation from Amplifyher Ventures. The money will be used to expand its provider network, go in-network and focus on its edtech service.

Put simply, Expressable connects children to speech-language pathologists on a recurring basis. The therapy is done live via Zoom for Healthcare with licensed professionals that Expresssable employs full-time. Clients are matched with a therapist in their area of need, from public speaking to vocal cord paralysis. Parents are able to reach their children’s SLP through secure SMS for coordination, questions and rescheduling throughout the week.

On top of real-time support, the virtual speech therapy provider has a suite of asynchronous services. The company is building an e-learning platform with homework assignments and lessons, prescribed by the therapist and provided via SMS, for parents to do with their children to reinforce the speech care plans.

The activities are meant to be bite-sized — used when driving to the grocery store or cooking dinner or playing in the backyard — and tailored for interaction with children. The lessons can be as simple as creating opportunities for a kid to ask for juice, or to practice two-word utterances with an imitation game. 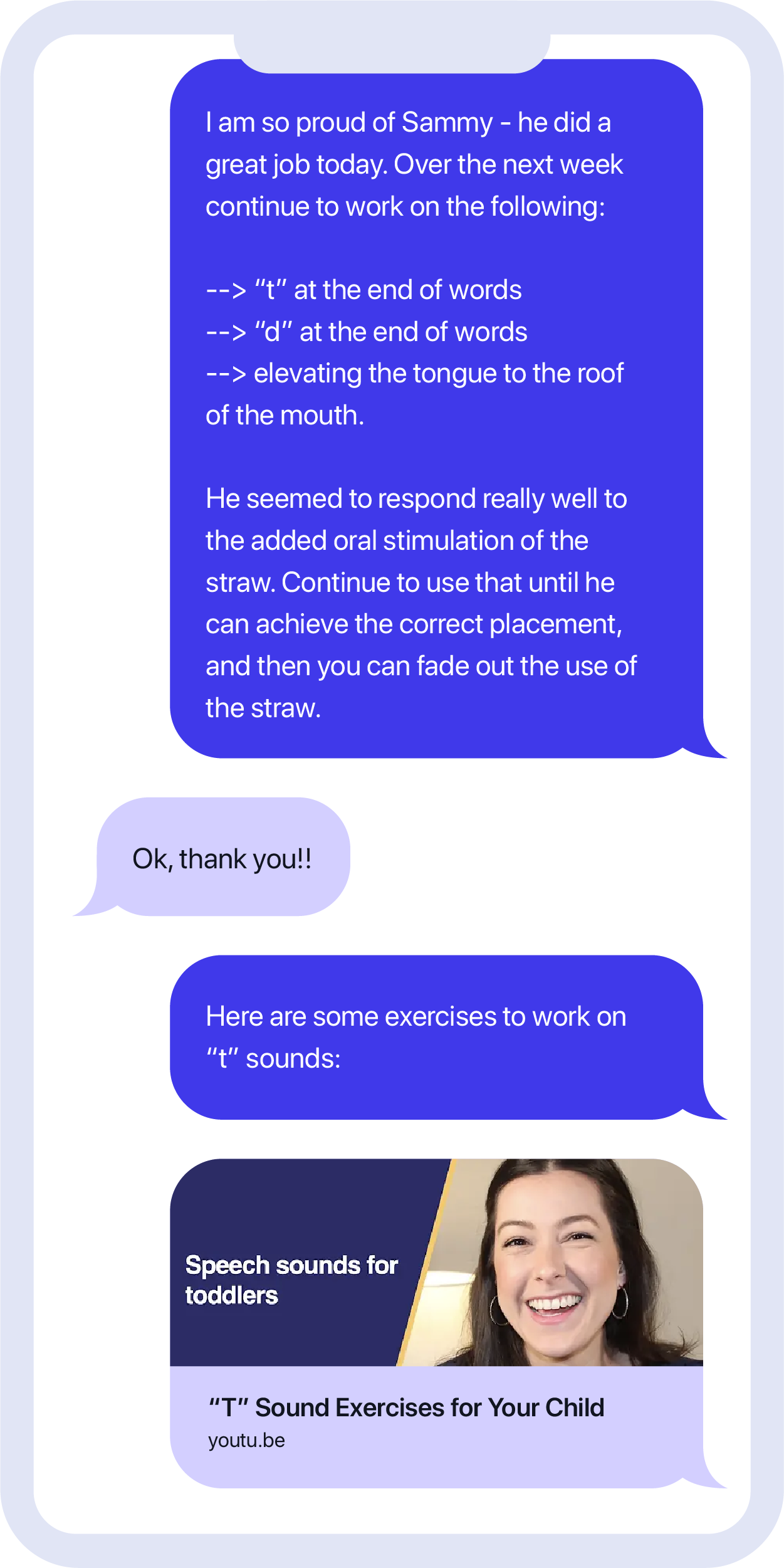 This unique edtech bit of Expressable leans heavily on parent involvement in the therapy process. Parental help has been shown to increase positive outcomes, but notably it could also leave low-income, working-class families out of the mix. Its price, on average, is $59 per week, and that’s currently only out of pocket rather than subsidized by insurance.

Part of Expressable’s value is that it’s better than the status quo, which surprisingly often actually amounts to nothing. According to the National Institute on Deafness and Other Communication Disorders, about 8-9% of children in the country have a speech sound disorder — but only half actually get treatment. What might start as an occasional stutter could turn into a communication disorder over time — so Expressable wants to intervene early to get kids on the right path.

“Public schools are the number-one provider for pediatric speech but they are unfortunately notoriously underfunded,” said Sherred. Children who are lucky enough to be eligible for school services are often provided them in a group setting, she continued, which lengthens the amount of time it takes to make progress.

Sherred witnessed firsthand as an SLP the “incredibly frustrating cycle” created by gaps in school intervention. She has spent the majority of her career in in-home health, where she would work in homes and daycares directly with children.

The majority of Expressable’s user base are children, but about 35% are adults, signaling how speech issues can continue past childhood.

Meagan Loyst, who sourced the Expressabble deal for Lerer Hippeau, is one example. Loyst was diagnosed with a speech and voice condition in late 2020 and needed to find remote SLP therapy, which introduced her to the challenges of finding a high-quality specialized SLP.

“Before Expressable, there was no consumer-facing brand out there solving these pain points for individuals with communications disorders,” Loyst said. “It’s evident that they’re already hiring the best SLPs out there, bringing parents and education into the process to focus on better outcomes for children, and doing so in a cost-effective and convenient way through virtual care.”

Telehealth with a twist

While telehealth usage remains above pre-pandemic levels, visits are on the decline. One challenge for any digital telehealth startup, Expressable included, is how to make a convincing pitch for moving caretaking fully virtual in a post-pandemic context.

The Expressable co-founders pointed toward consistency, both internally and externally, as a competitive advantage.

First, speech therapy is a recurring service that many patients use once a week, every month, for years. “A lot of other telemedicine plays are these quick, convenient, and direct primary care,” Barbara said. “[We are] a longer tail of treatment plan that requires a close relationship between provider and patient.”

Second, unlike many telehealth startups, Expressable has hired its specialists full-time as W-2 employees. It’s a strategic choice to help ensure to its clients that their SLP of choice is a long-term relationship. The startup has 50 W-2 SLPs currently.

Why are telehealth companies treating healthcare like the gig economy?

“We have built a career path for SLPs and a value proposition to speech language pathologists where they can work from home, set their own hours [get] paid above the national average, and then receive benefits that may not be obviously not common if you’re working in a contractor position.”

Not relying on the traditional contractor model might be a differentiation, but it’s also a challenge. The startup will have to rapidly (and efficiently) hire SLPs for the variety of speaking conditions out there — and in order to expand into new markets, it has to go through the arduous legal process of local licensing requirements, instead of just going to a white-label solution that helps staff similar companies while offloading individual practitioner certification.

While it has ambitions to become a national practice, Expressable currently operates in 15 states, and employs SLPs that are licensed in all the states in which it operates.