As the oldest of 12 children, Bunim Laskin spent much of his teen years looking for ways to help keep his siblings entertained. Noticing that a neighbor’s pool was often empty, Laskin reached out to ask if his family could use her pool. To make it worth her while, he suggested that they could help cover her expenses for maintaining the pool.

Soon after, five other families had made the same arrangement with her and the pool owner had six families covering 25% of her expenses. This meant that the neighbor was actually making money off her pool. The arrangement sparked a business idea in Laskin’s mind. At the age of 20, he founded Swimply, a marketplace for homeowners to rent out their underutilized pools to local swimmers, with Asher Weinberger.

The Cedarhurst, New York-based company launched a beta in 2018, starting with four pools in the New Jersey area.

“We used Google Earth to find houses, and then knocked on 80 doors with a pool,” CEO Laskin recalls. “We got to 100 pools organically. Word of mouth really helped us grow.” The site was pretty bare bones, he admits, with potential customers only able to view photos of the pools and connect with the pool owner by phone.

That year, Swimply did around 400 reservations and raised $1.2 million from friends and family.

In 2019, Swimply launched what he describes as a “proper” website and app with an automated platform. It grew “four to five times” that year, again mostly organically. In an episode that aired in March 2020, the company appeared on Shark Tank but went home without a deal.

Then the COVID-19 pandemic hit. Swimply, Laskin said, pivoted right into the pandemic.

“We were the perfect solution for people when the world was falling on its head,” he said. The company restructured its offering to ensure that pool owners did not have to interact with guests. “It was the perfect, contact-free, self-serve experience to hang out and be with people you quarantined with.”

The CDC then came out to say that it was safe to swim because chlorine could help kill the virus, and that proved to be a big boon to its business.

“On one end, it was a way for people to have a normal day and on the other, it helped give owners a way to earn an income, at a time when many people were being affected financially,” Laskin told TechCrunch.

Business took off in 2020 with revenue growing 4,000% and now Swimply is announcing a $10 million Series A round. Norwest Venture Partners led the financing, which also included participation from Trust Ventures and a number of angel investors such as Poshmark founder and CEO Manish Chandra; Rob Chesnut, former general counsel and chief ethics officer at Airbnb; Ancestry.com CEO Deborah Liu and Michael Curtis.

Swimply is now operating in a total of 125 U.S. markets, two markets in Canada and five markets in Australia. It plans to use its new capital in part to expand into new markets and toward product development. 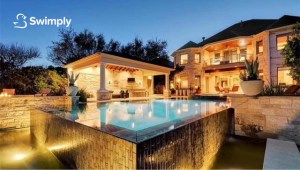 The way it works is pretty straightforward. Swimply simply connects homeowners that have underutilized backyard spaces and pools with those seeking a way to gather, cool off or exercise, for example. People or families can rent pools by the hour, ranging in price from $15 to $60 per hour (at an average of $45/hour) depending on the amenities. New markets that Swimply has recently expanded to include Portland, Oregon; Raleigh, North Carolina and the California cities of Oakland, San Luis Obispo and Los Gatos.

“The shifting mindset from younger generations about ownership is a huge contributor to increased growth of the Swimply marketplace,” said co-founder Weinberger, who serves as Swimply’s COO. “Swimming is the third most popular activity for adults and number one for children, and yet no other company has tackled the aquatic space to make swimming more affordable and accessible…until now.”

While the company declined to provide hard revenue figures, Laskin said Swimply was seeing “seven digits a month in revenue” and 15,000 to 20,000 reservations a month. Families represent the most popular reservation.

“People can book and pay through our platform, and only 20% of hosts ever meet their guests,” Laskin said. “We’re enabling a new kind of consumer behavior with what we’re doing.”

The company is planning to use its new capital to also rebuild much of its tech infrastructure and boost its customer support team to be more “readily available.”

It is also now offering a complimentary up to $1 million worth of insurance per booking for liability as well as $10,000 for property damage.

Swimply has a little over 20 employees, up 10 times from two people in December of 2020. It plans to double that number over the next few months.

The company’s model has proven quite lucrative for some owners, according to Laskin.

Its only criteria is that owners offer a clean pool. Eighty-five percent of hosts offer restrooms as well. If they don’t, they are limited to one-hour reservations with a max of five guests. Swimply has also partnered with local pool companies, and if they pay one of its owners a visit and certify that pool, that owner gets a badge on the site “so guests get an additional level of security,” Laskin said.

Ed Yip of Norwest Venture Partners admits that when he first heard of the concept of Swimply, he “didn’t know what to make of it.”

But the more he heard about it, the more excited he got.

“This is the Holy Grail for a consumer investor. We’re not changing consumer behavior, but rather [we] productize the experience and make it safer and easier on both sides,” Yip told TechCrunch.

What also gets the investor excited is the potential for Swimply beyond just swimming pools in the future.

“We’re seeing a ton of demand from hosts wanting to list hot tubs and tennis courts, for example,” Yip said. “So this can turn into a marketplace for shared outdoor resources and that’s a huge market opportunity that adds value on both sides.”

Indeed, the concept of monetizing underutilized space is a growing concept. Earlier this year, we reported on Neighbor, which operates a self-storage marketplace, raising $53 million in a Series B round of funding. Neighbor’s unique model aims to repurpose under-utilized or vacant space — whether it be a person’s basement or the empty floor of an office building — and turn it into storage.