Four years ago, Argo AI made its first acquisition as a young, newly backed self-driving vehicle startup. Now, Argo says its acquisition of lidar company Princeton Lightwave is paying off and is poised to help it deliver autonomous vehicles that can operate commercially on highways and in dense urban areas starting next year.

Argo AI unveiled Tuesday details on a long-range lidar sensor that it claims has the ability to see 400 meters away with high-resolution photorealistic quality and the ability to detect dark and distant objects with low reflectivity. The first batch of these lidar sensors are already on some of Argo’s test vehicles, which today is comprised of Ford Fusion Hybrid sedans and Ford Escape Hybrid SUVs. By the end of the year, Argo’s test fleet will transition to about 150 Ford Escape Hybrid vehicles, all of which will be equipped with the in-house lidar sensor. Ford, an investor in and customer of Argo, plans to deploy autonomous vehicles for ride-hailing and delivery in 2022. Argo’s other investor and customer, Volkswagen, said it will launch commercial operations in 2025.

It’s not just the technical capabilities of the lidar sensor that matter, Argo CEO and co-founder Bryan Salesky told TechCrunch in a recent interview. The lidar sensor was developed to be cost-effective and manufactured at scale, two factors that matter for any company trying to commercialize autonomous vehicle technology.

“When we first started, I knew that the market did not have an adequate long-range lidar,” Salesky said, who noted that while Waymo had developed its own lidar sensors with long-range capabilities it was not available for other developers to buy. “We decided to make an acquisition focused on plugging the hole for that long-range need. It has really been a game-changer for our self-driving system and has enabled us to be able to move really fast, to the point now where we’re starting to equip cars with the sensor, and it’s opening up testing in urban and highway environments.”

Lidar, the light detection and ranging radar that measures distance using laser light to generate a highly accurate 3D map of the world, is considered by most in the industry a critical sensor required to safely deploy autonomous vehicles at a commercial scale. More than 70 companies, some of which have recently gone public via mergers with special purpose acquisition companies, are developing lidar — all claiming technical breakthroughs and cost benefits. And then there are the AV developers such as Cruise and Aurora, which just like Argo have acquired lidar companies in hopes of developing an in-house solution that will give them an edge over the competition and free them from working with an outside supplier like Velodyne.

Ford, which invested $1 billion into Argo, had also backed lidar maker Velodyne, the dominant supplier in the market. But progress within Argo has changed Ford’s stance. Veoneer, which announced in 2019 that it was leveraging Velodyne’s technology for a contract to supply the sensor to an unnamed AV customer, reported in February that it had lost its contract. It wasn’t clear exactly who the customer was, although many speculated it was Ford or Argo. That same month, Ford reported in a regulatory filing that it had dissolved its 7.6% stake in Velodyne, cementing its bet on Argo’s in-house lidar.

“Assuming the sensor lives up to the claims, it should provide a substantial performance advantage over Velodyne and give them the flexibility to operate more safely at highway speeds,” said Sam Abuelsamid, principal analyst with researcher Guidehouse Insights. Abuelsamid points to a few factors, including its wavelength and sensitivity, that could give Argo an edge. 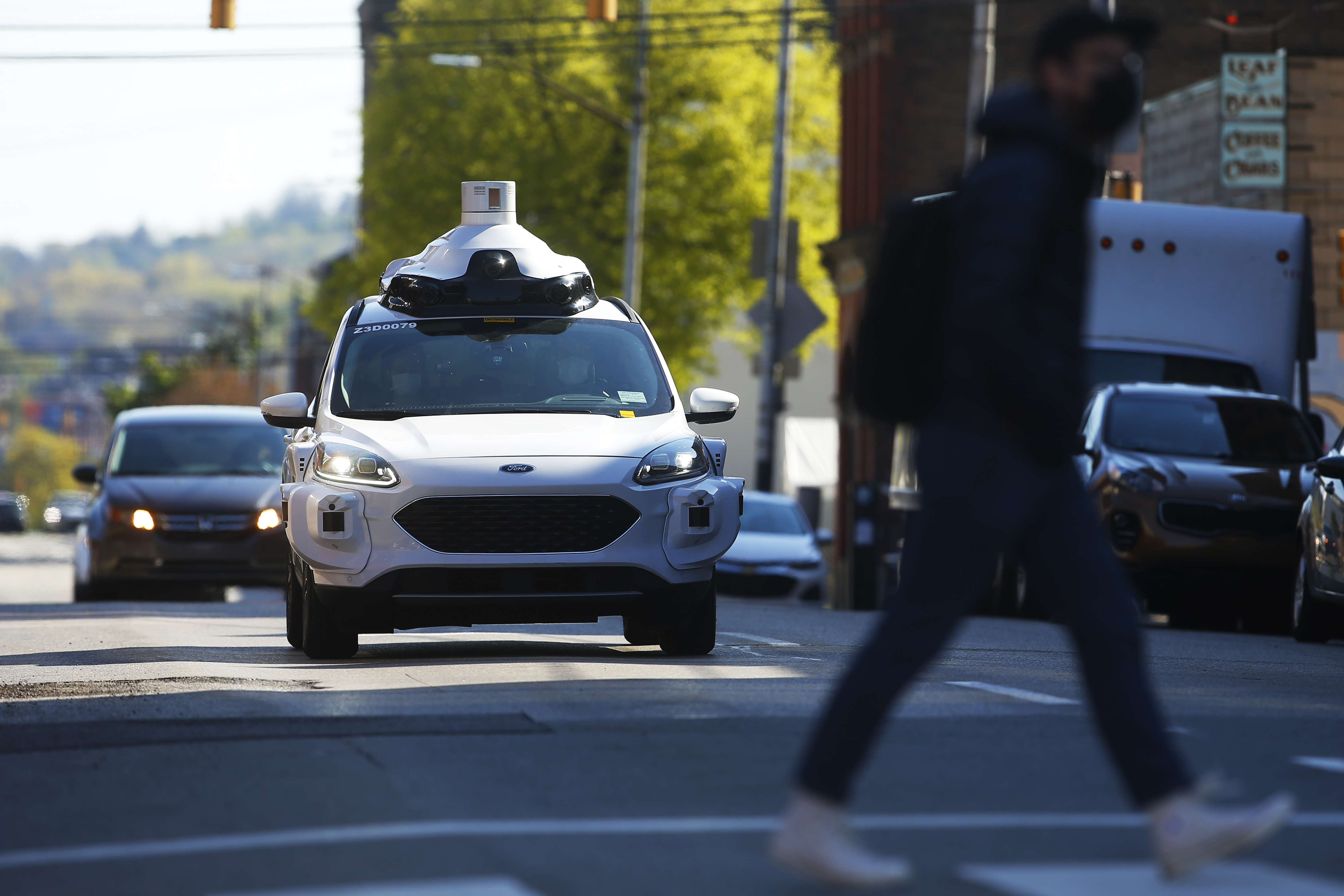 Lidar sensors send out millions of beams or pulses every second to detect surrounding objects and then measure the return to create a point cloud or 3D image. That point cloud shows the objects and calculates their range.

The Argo sensor is based on what it describes as Geiger-mode time of flight lidar, which it says uses beam detectors that can detect the smallest particle of light. Argo says its single-photon sensors are able to build up images of low-reflectivity objects like a black-painted car at a much greater distance than can a traditional linear time of flight lidar. Argo also said its lidar sensor operates at a wavelength above 1400 nanometers, which theoretically enables more power to help the range.

Abuelsamid noted that more common 905 nm lidars are largely limited to vehicles traveling about 40 mph to 45 mph, which suggests that Argo’s sensor could be used at highway speeds.

“Argo lidar’s use of the Geiger-mode photodiode and binning of pixels also contributes to the increased sensitivity,” he said. “The ability to detect a single photon and then using the software to do statistical analysis to aggregate them and reject noise seems like it should help as well. Being able to pick up low reflectivity objects like truck tire treads or very black vehicles is important.”

He also noted that the Argo sensor is a mechanical spinning lidar, which is a common design based on the original Velodyne HDL-64. However, Argo’s lidar rotates the outer surface, a design decision to help throw off water from the sensor to help keep it clean.

Combining all of this will allow Argo to develop a self-driving system for a variety of use cases such as low-speed dense urban sectors, higher-speed boulevards that have a mix of pedestrian, cyclists and cars to contend with as well as highways.

Argo has spent much of its time testing in urban environments, specifically in Austin, Detroit, Miami, Palo Alto, Pittsburgh and Washington, D.C. But Volkswagen, the company’s newest backer and customer, is also interested in autonomous driving on highways. Argo plans to begin testing in additional cities this year, including Munich.

Argo’s self-driving system is designed to be agnostic, meaning it could be used in multiple business models. Argo’s customers Ford and VW will of course dictate what those business applications will be, and for now it is robotaxis and middle-mile delivery. However, Salesky noted that the sensors could be applied to trucking.

“We’re kind of focused on goods movement and people movement, but I think trucking is something that we’re taking a hard look at,” Salesky said. “This isn’t something that we’ve prioritized yet, but we’re definitely keeping trucking open and I think it’s absolutely an interesting place for our technology.”

Argo also has aspirations beyond manufacturing a long-range lidar for its own needs. Salesky told TechCrunch that the underlying technology can be packaged in other ways to create different types of sensors. “It is a really interesting potential license opportunity,” he said, cautioning that the priority is on autonomous vehicle applications.

“I think it’s a little too soon to start selling within the automotive realm, but it’s an opportunity that’s there,” Salesky said. “I do think that this underlying technology can be packaged in a bunch of ways to service other industries such as mining, agriculture, oil and gas.”