While there’s been plenty of attention and money lavished on virtual event platforms over the past year, Introvoke co-founder and CEO Oana Manolache predicted that we’re only at the beginning of a “third wave of digital transformation.”

In her framing, the first wave came at the beginning of the pandemic, when everyone was using video conferencing tools like Zoom for their virtual events. Next came conference platforms like Hopin (which has been raising money at a mind-boggling clip). But Manolache argued that even Hopin represents a “Band-Aid” that customers are hoping will tide them over until in-person events can resume — particularly when organizers have to point attendees to a third-party platform.

“One size does not fit all,” she said. “The Band-Aid solution that was only supposed to last for a couple months has had big benefits as companies grew their customer base and revenue targets. Now we’ve reached the third wave, as organizations want to bring solutions to their own universe and own their relationship with the audience.”

The startup offers components like virtual stages, chat rooms and networking hubs, all customizable and embeddable on a customer’s website. Manolache said Introvoke (the name comes from the idea of “thought-provoking introductions”) is designed for a hybrid future, which will take multiple forms: “Hybrid is going to mean virtual-only events, in-person only events and events that have in-person and virtual elements.” 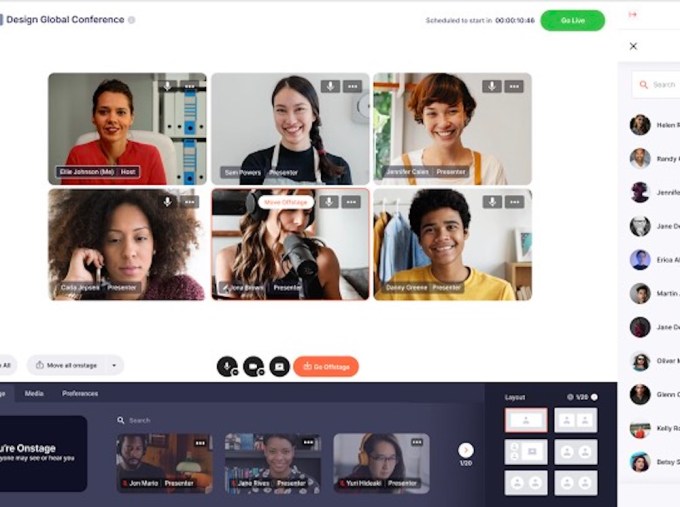 Introvoke charges customers based on live event minutes, a model that it says is accessible to companies large and small. Its components can be embedded on websites built with WordPress, Squarespace, Wix, Splash and other platforms, but also on a customer’s internal intranet.

“We’ve been so impressed by the way customers are using the technology — conferences, career fairs, employee engagements,” Manolache said.

These best practices maximize the value of your online events

She added that as customers like Comcast, Wharton and Ritual Motion have used the platform in private preview mode, they’re beginning to break free of the in-person model. For example, Introvoke events can allow for attendees to chat with each other over weeks or months, not just a few days.

In a statement, Struck Capital founder and Managing Partner Adam B. Struck suggested that virtual events “will continue far beyond the COVID-19 pandemic.”

“Right now, virtual experiences, from conferences and concerts to company all-hands, are generally hosted on third party platforms, which creates a disjointed experience for the brand or organization hosting the event,” he continued. “Virtual enablement should be native to the website and platform of the enterprise itself, and it’s the role of technologists like the Introvoke team to make these experiences as seamless as any in-person event.”