With the increase of digital transacting over the past year, cybercriminals have been having a field day.

In 2020, complaints of suspected internet crime surged by 61%, to 791,790, according to the FBI’s 2020 Internet Crime Report. Those crimes — ranging from personal and corporate data breaches to credit card fraud, phishing and identity theft — cost victims more than $4.2 billion.

For companies like Sift — which aims to predict and prevent fraud online even more quickly than cybercriminals adopt new tactics — that increase in crime also led to an increase in business.

Last year, the San Francisco-based company assessed risk on more than $250 billion in transactions, double from what it did in 2019. The company has over several hundred customers, including Twitter, Airbnb, Twilio, DoorDash, Wayfair and McDonald’s, as well a global data network of 70 billion events per month.

To meet the surge in demand, Sift said today it has raised $50 million in a funding round that values the company at over $1 billion. Insight Partners led the financing, which included participation from Union Square Ventures and Stripes.

While the company would not reveal hard revenue figures, President and CEO Marc Olesen said that business has tripled since he joined the company in June 2018. Sift was founded out of Y Combinator in 2011, and has raised a total of $157 million over its lifetime.

The company’s “Digital Trust & Safety” platform aims to help merchants not only fight all types of internet fraud and abuse, but to also “reduce friction” for legitimate customers. There’s a fine line apparently between looking out for a merchant and upsetting a customer who is legitimately trying to conduct a transaction.

Sift uses machine learning and artificial intelligence to automatically surmise whether an attempted transaction or interaction with a business online is authentic or potentially problematic. 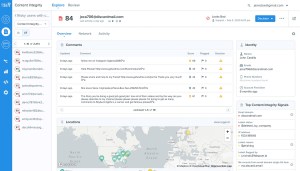 One of the things the company has discovered is that fraudsters are often not working alone.

“Fraud vectors are no longer siloed. They are highly innovative and often working in concert,” Olesen said. “We’ve uncovered a number of fraud rings.”

“By making small donations to themselves, they laundered that money and at the same tested the validity of the stolen cards so they could use it on another site with significantly higher purchases,” he said.

In another case, the company uncovered fraudsters using Telegram, a social media site, to make services available, such as food delivery, with stolen credentials.

The data that Sift has accumulated since its inception helps the company “act as the central nervous system for fraud teams.” Sift says that its models become more intelligent with every customer that it integrates.

Insight Partners Managing Director Jeff Lieberman, who is a Sift board member, said his firm initially invested in Sift in 2016 because even at that time, it was clear that online fraud was “rapidly growing.” It was growing not just in dollar amounts, he said, but in the number of methods cybercriminals used to steal from consumers and businesses.

“Sift has a novel approach to fighting fraud that combines massive data sets with machine learning, and it has a track record of proving its value for hundreds of online businesses,” he wrote via email.

When Olesen and the Sift team started the recent process of fundraising, Insight actually approached them before they started talking to outside investors “because both the product and business fundamentals are so strong, and the growth opportunity is massive,” Lieberman added.

“With more businesses heavily investing in online channels, nearly every one of them needs a solution that can intelligently weed out fraud while ensuring a seamless experience for the 99% of transactions or actions that are legitimate,” he wrote.

The company plans to use its new capital primarily to expand its product portfolio and to scale its product, engineering and sales teams.

Sift also recently tapped Eu-Gene Sung — who has worked in financial leadership roles at Integral Ad Science, BSE Global and McCann — to serve as its CFO.

As to whether or not that meant an IPO is in Sift’s future, Olesen said that Sung’s experience of taking companies through a growth phase such as what Sift is experiencing would be valuable. The company is also for the first time looking to potentially do some M&A.

“When we think about expanding our portfolio, it’s really a buy/build partner approach,” Olesen said.